Trump claims he's the victim of a "witch hunt." But his anti-woman "infanticide" hoax is the real thing 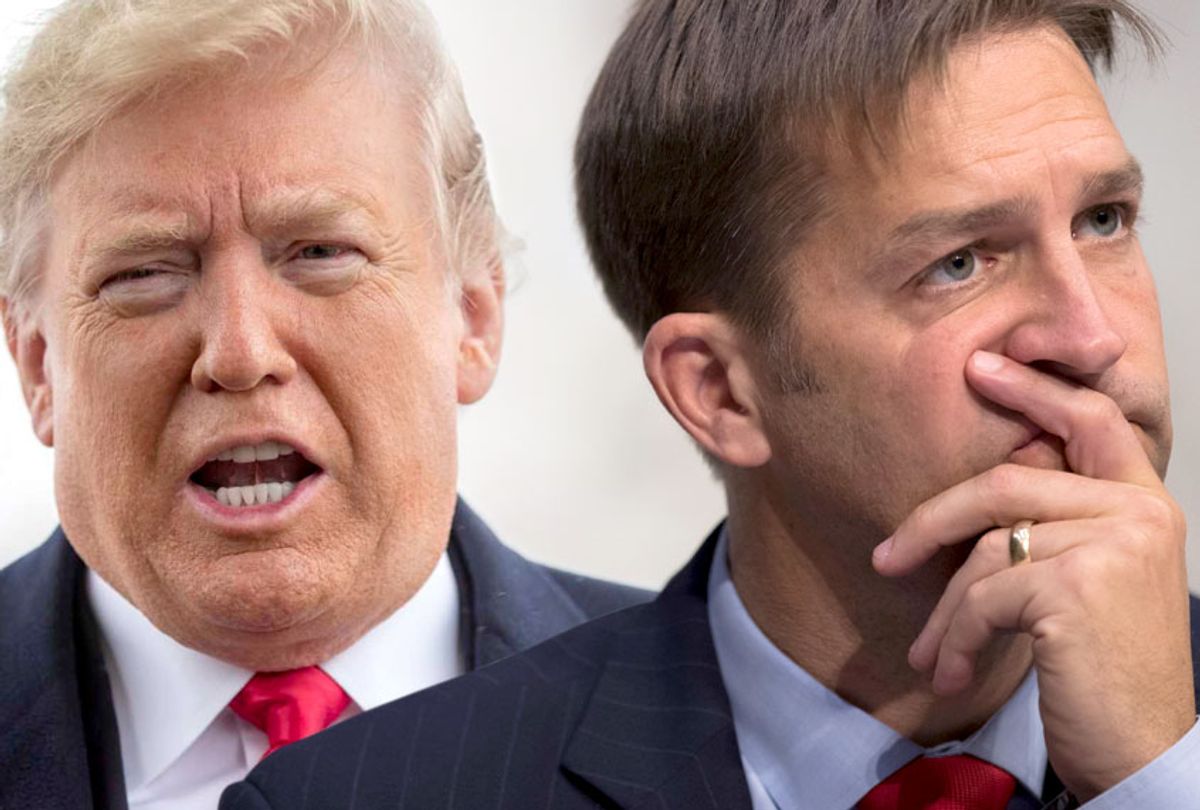 Donald Trump loves to paint himself as the victim of a "witch hunt." He has used the phrase dozens of times to discredit the investigation into his campaign's ties with a criminal Russian conspiracy to subvert the 2016 presidential election.

But it was just this week that Trump, following the lead of Senate Republicans, made a move that is eerily reminiscent of the actual witch hunts of the past, rooted in misogyny and fear of female independence.

This bill is a modern-day spin on the witch hunt, channeling misogynist fears about female independence into a series of lurid and false accusations.

It's a lie, of course. According to the Guttmacher Institute, four out of five abortions occur before 11 weeks of gestation, before the embryo has even officially developed into a fetus. Only 1.3 percent of abortions occur after the 20th week of gestation. The percentage of abortions that are performed post-viability is so small that it literally doesn't register on surveys of abortion in the United States. This vanishingly small number of abortions are performed mostly, if not exclusively, out of medical necessity, and usually because the fetus has birth defects incompatible with life.

The only people this bill could affect are families with babies who are born alive but clearly dying. Its only possible result would be to deprive those babies and their families of comfort by forcing fruitless and painful medical interventions.

Not that the ghouls in the Republican Party care. Forcing such families to suffer, in the Republican view, is a small price to pay to float a false and misogynistic narrative: That allowing women to have freedom -- especially sexual freedom -- leads to murder and death.

For decades, anti-choicers have flitted from one hoax to another, from the "born alive" lie to the "selling baby parts" lie to the "fetal pain" lie to the "birth control is dangerous" lie. But whatever the hoax of the moment may be, the story is the same — and it's the same story told by the witch hunters of old.

The story is that women, as a class of human beings, cannot be trusted with freedom. Sometimes women are painted as too stupid for freedom and sometimes they are painted as too wicked for freedom, but either way the moral is the same: If women are allowed to control their own bodies and their own lives, they will become monsters who murder children and destroy society.

So conservatives push for women to  be controlled by men and by the state, ensconced in patriarchal marriages and denied access to reproductive health technologies that allow them to decide when and how to give birth.

Trump, a woman-hater to his bones, really leaned into the accusation that free women are a pack of baby-killers:

Trump and his supporters really want people to believe that women's sexual freedom leads to violence. This is the complete inverse of reality, where the vast majority of sexual violence is committed by men.

Trump himself was recorded bragging about forcibly groping and kissing women -- and has been credibly accused by at least 16 women of doing just that. He also has a long history of defending men who have been accused of violence or harassment. Roy Moore, Brett Kavanaugh, Rob Porter, Roger Ailes, Bill O'Reilly: All these men have been accused of abuse by multiple women, but Trump stood by them. And now he has the gall to turn around and accuse women of "infanticide."

There's no small amount of projection going on here. Men who commit or excuse violence against women then turn around and claim that's it's women who are violent and out of control. This fits in with the larger pattern of right-wingers accusing the victims of oppression of being the offenders, as with claims that white people are victims of "reverse racism" or that LGBT people are denying "religious freedom" to Christians.

This history goes back to the witch hunts. Most of the victims were innocent women, an oppressed class reimagined by their persecutors as possessors of secret powers and evil intentions.

Sasse's bill didn't pass and, frankly, passing it was never the point. The point is to drum up witch-hunt fervor, and to inject the grotesque libel that female freedom leads to infanticide and other lurid evils into the political discourse.

No doubt the main motive is sheer venality. Sasse, Trump and their allies need a distraction from the real news stories happening this week, such as Trump's former lawyer, Michael Cohen, testifying before Congress and Democrats forcing a vote on the fake "national emergency" that Trump declared in order appropriate funds for his border wall.

But history shows us that these misogynist myths can cause real and immediate damage. There are a lot of unhinged and angry men (and a few women) out there, eager to project all their personal failures into anger at women over this "infanticide" myth.

In 2015, one such man, Robert Dear, murdered three people at a Colorado Planned Parenthood, claiming to believe  in a GOP-hyped conspiracy theory that the organization was running a black market in "baby parts." In 2009, believing right-wing lies about late-term abortion, a man named Scott Roeder murdered Dr. George Tiller, one of the few doctors in the country who specialized in helping women who had a medical need to terminate late in their pregnancies.

Violence and intimidation at abortion clinics has been on the rise over the past few years, and Republican leaders are only too happy to exploit the sexual hangups and obsessions of unstable people for political gain.

Unfortunately, there's good reason to think this will get worse before it gets better. Gender and sexuality are hot button issues, especially lately. A lot of people, especially men, are angry about women speaking out against inequality and sexual abuse, and are ready to hear a story about how women are the true villains who need to be suppressed for the greater good.

Furthermore, Donald Trump desperately needs something he can use to distract his followers, as his corruption and likely crimes come into clearer view. So women will once again be the scapegoat for all the conservative movement's anxieties for at least the next couple of years, and reproductive rights will come under serious attack.