Here's how Millennials' $1 trillion in debt is affecting their lives

Given bleak economic prospects, depression is on the rise for Millennials 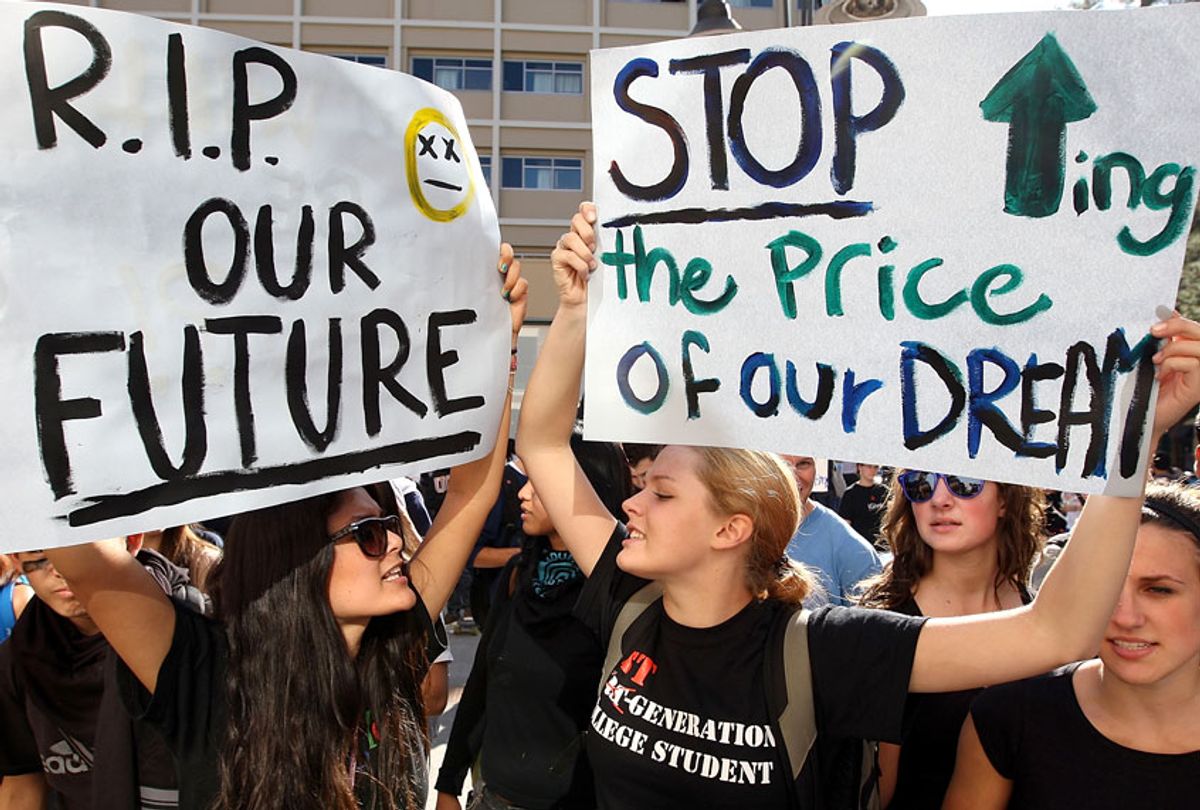 UCLA students demonstrate after board members voted to approve a 32 percent tuition hike the following year on November 19, 2009 (Getty/David McNew)
--

Though older Americans may be perplexed by the cynicism and self-deprecating nature of millennial culture, it turns out there's good reason: the economic outlook for millennials is dismal. A new report finds that the sum of young Americans' debt is in the 13-figure range — much of it student debt.

According to the New York Federal Reserve Consumer Credit Panel, debt for Americans between the ages of 19 and 29 exceeded $1 trillion at the end of 2018, the highest that number has been since late 2007, as reported by Bloomberg. Overall, outstanding student loan debt increased from $1.44 trillion to $1.46 trillion for Americans of all ages. That is estimated to be $500 billion more than the total U.S. credit card debt.

For Millennials who are still paying off student loans, record-high debt levels affect more than their credit scores. Psychological research suggests that student debt adversely affects one's mental health. It is not difficult to draw the link between the rise of Millennial mental health problems and the rise in debt. Indeed, a Blue Cross Blue Shield study last year found that teens and Millennials had the most drastic increase in depression diagnoses between 2013 and 2016.

Millennials started entering the workforce at the end of the Great Recession, yet static wages and the increase in the cost of living have cast a grim outlook on the generation's economic future. Add record-breaking student debt loads to the equation, and many of this generation has had a difficult time getting their lives started. The Richard and Rhoda Goldman School of Public Policy at the University of California, Berkeley explained that there are multiple factors that have contributed specifically to this generation’s spike in anxiety. “They include but are not limited to: economic and financial stressors,” the report stated.

Psychotherapist Nathalie Theodore, who works with young clients who struggle with anxiety, told Salon in an email financial debt is frequently a huge concern.

“Financial debt is a huge concern for many millennials today, and it can certainly impact mental health," Theodore said. "Being in a bad place financially can contribute to feelings of anxiety —  you may find yourself constantly wondering 'what am I going to do?' or 'how will I get myself out of this?' — and depression — you may find yourself thinking that you’re 'worthless' or that you’ve 'failed,'" Theodore said.

Theodore said that a good way to cope is to make a plan to save money.

“Maybe that means living with your parents or moving to a smaller place; or it could mean taking a side gig and putting those earnings into a savings account,” she said. “Taking action will help you feel more in control of your circumstances and less helpless, which can go a long way to help reduce anxiety and depression.”

But of course, being overworked can come with its own mental health problems and Millennial burnout. For many Millennials, student debt is keeping them from moving forward with other life events such as marriage or having children.

Genevieve Diaz, a 27-year-old who lives in San Francisco, told Salon in May 2017 that the thought of having children seemed to be less attainable prospect for her, partly due to her student debt. “The thing I think about is by the time I pay off my student debt, will I still be able to have kids?” she told Salon. “Will I have enough time to be fertile, have kids, and build [my] business, put food on the table for myself, and live in San Francisco?”

Debt is not only a Millennial problem, as the data show the next generation will graduate burdened by debt, too. The average borrower left college with $37,172 in loans between 2016 and 2017. As researchers observe how anxiety and depression are on the rise for America’s teens, too, student debt is likely to impact their mental health. Some research suggests it has already: the latest Pew Research poll showed that 61 percent of teens say they feel a lot of pressure to get good grades. The Pew poll also showed that those who plan to attend a four-year college in households with incomes below $75,000 had more concerns about being able to afford college compared to those from families with higher incomes.