Buttery foil-packet scallops are my favorite "TV dinner" for one

A ready-made meal for the '90s kid in me 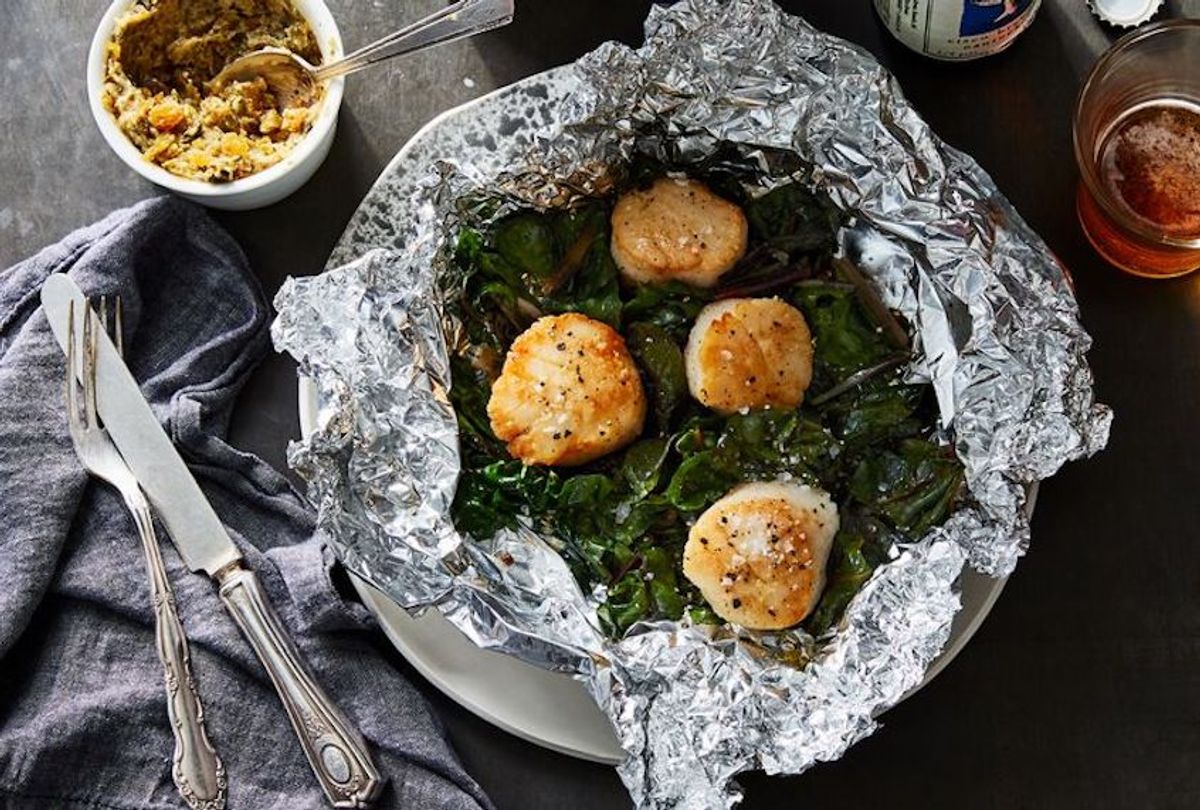 The term "TV dinner," "a quick-frozen packaged dinner (as of meat, potatoes, and a vegetable) that requires only heating before it is served," was first used in 1954. That's when C.A. Swanson & Sons introduced their branded line of ready-made turkey dinners to American households in an attempt to get rid of the overstocked frozen turkeys they weren't able to sell during Thanksgiving. It was a genius move, because they sold over 10 million aluminum trays that year. And with that, the TV dinner was born.

Swanson's marketing ploy couldn't have been better timed. "As home entertainment shifted from the piano (once a ubiquitous and nearly essential home accessory) to the big wooden box with its small flickering screen," writer Owen Edwards explains in Smithsonian Magazine, "the idea of watching — instead of listening to — programs at home seemed transformative, a tipping point into a changed world. Swanson's marketers clearly realized that this was a medium you could tie your message to; after all, the company had not tried to market Radio Dinners."

65 years later, and eating in front of the television has yet to lose its charm.

Growing up in '90s suburban Georgia to Korean immigrant parents who worked late hours (my father as a janitor and my mother as a Dunkin' Donuts barista), my brother and I came home from school and heated frozen dinners for ourselves regularly. As an adult, I've never blamed them for this — that their working and providing for us meant they didn't always make it to dinner. In fact, I look back fondly on those meals my brother and I shared, alone, in front of the television. In many ways, they were our first window into non-Korean food: meatloaf, lasagna, spaghetti and meatballs, beef stroganoff, and Salisbury steak (my personal favorite), among others.

Even as I got older and learned to cook (by watching the Food Network in the living room, over a tray of Swedish meatballs and egg noodles, another favorite), I'd still pick up a box of Stouffer's here and there on my grocery store runs for those nights when I knew I wouldn't have time. Only I'd stretch it with leftover white rice and steamed broccoli to make it go further (and to help offset the sodium levels).

You could say I still have a soft spot for TV dinners. But I'm also fascinated by their lasting significance in daily American life. I'd argue that Swanson's marketing strategy to sell all of those turkey dinners back in 1954 helped set us up for one of life's simplest pleasures: eating dinner in front of the television.

Maybe you're like Jake Gyllenhaal's character in "Brokeback Mountain" and believe that family dinners are meant for bonding — not screens. For what it's worth, I'd agree. Today's equivalent might be staring at your phone while sharing a meal with others, which is one of my biggest pet peeves.

Over the years, my "TV dinners" have evolved and gained new meaning as I've grown more comfortable in the kitchen. Now they're simple, nutritious, premade dinners that are waiting for me in the freezer or fridge: say, a sheet-pan of spiced chicken thighs, a breaded and ready-to-fry cube steak, or a foil packet of sweet, plump scallops and rainbow chard. Premade means something different for everyone; for me, it means doing 90% of the work in advance, and leaving 10% (the cooking) to the very end.

Not that the 90% here is very hard. You're just filling a large sheet of aluminum foil with a protein and a vegetable (in this case, the scallops and chard), sealing it, and saving it in the fridge to be baked off later in the week when you need a 15-minute meal in a flash.

The true star here, however, is the caper-raisin butter that runs through the entire foil packet. I first read about this golden elixir in "Tacos: Recipes and Provocations" by Alex Stupak and Jordana Rothman, who got it from Jean-Georges Vongerichten. "This scallop preparation helped make JGV's flagship restaurant a sensation when it opened in 1997," they write in the recipe's headnote. I thought it was the strangest combination of ingredients and had to try it. Now I keep a jar of the stuff in my fridge most weeks of the year. It tastes great with pasta, roasted cauliflower, raw bitter vegetables, and of course, scallops.

Though I've scaled back the ingredient amounts for a single serving, I've amped up the butter proportion (so it's more of a compound butter to cook with, rather than just a sauce) and replaced the sherry vinegar with malt (only because that's what I always have on hand). This strange, perfect, salty-sweet-sour butter is a great example of how I like to meal prep: I stock my fridge with ready-made dinners and powerhouse staples so I can zhuzh up all manner of dishes at a moment's notice.

All of this just helps, in the long run, to leave more time for television.