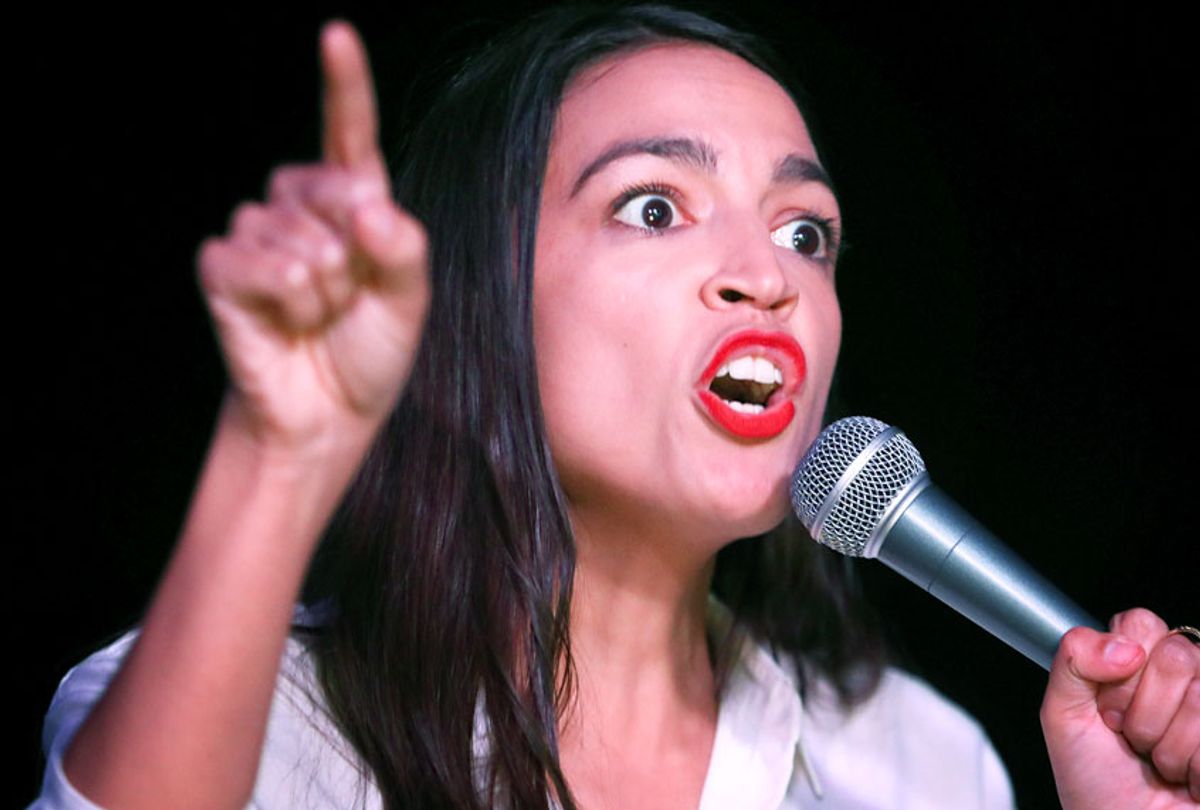 Rep. Alexandria Ocasio-Cortez, D-N.Y., on Saturday condemned fellow House Democrats, who she labeled a "splinter group," after they voted in favor of a contentious GOP-sponsored amendment that would target undocumented immigrants. The provision was tacked on to a sweeping gun control bill that passed the Democratic-controlled House last week.

The bill, which advocates have hailed as the most significant gun control measure in more than two decades, would require background checks on all gun sales in the country. It was approved by the House of Representatives on Wednesday by a 240-190 vote, with Democrats cheering the historic legislation. But carrying the measure to the finish line was not without challenges.

One such roadblock was a controversial amendment to the bill, proposed at the last minute by Rep. Doug Collins, R-Ga., that would require the FBI to notify the U.S. Immigration and Customs Enforcement (ICE) when undocumented immigrants attempt to buy a gun. The provision was approved on a 220-209 votes, with 26 Democrats joining the Republicans in support of the amendment. Of the Democrats who backed the addition, 22 were from districts held by Republicans before the 2018 elections, ThinkProgress reported.

While Ocasio-Cortez voted in favor of the final bill, the freshman lawmaker from New York tweeted that she was "upset" at the "splinter group of Dems" who had voted in support of the ICE provision, which she referred to as a "gotcha amendment."

"ICE is a dangerous agency with 0 accountability, widespread reporting of rape, abuse of power [and] children dying in DHS custody," she wrote. "Having a D next to your name doesn't make that right."

Ocasio-Cortez also noted that she had not threatened to target Democratic incumbents who had supported the ICE provision by pushing for primary challenges to them in 2020. Her comments follow a Friday report by The Washington Post claiming that the New York Democrat had said some of her colleagues "could find themselves 'on a list' of primary election targets" because of their vote.

"Being unified means ensuring that Democrats aren't primary-ing other sitting Democrats," Rep. Josh Gottheimer, D-N.J., told the Post. "Since when is it OKto put you on a Nixonian list? We need to have a big tent in our party or we won’t keep the House or win the White House."

Gottheimer, a co-chairman of the bipartisan Problem Solvers Caucus, said he has confronted party leaders about such threats, which have also come from Justice Democrats, the progressive group that backed Ocasio-Cortez's primary campaign against former Rep. Joe Crowley, who at the time was the fourth highest-ranking Democrat in the lower chamber. (Justice Democrats also helped elect Rep. Ayanna Pressley, who defeated 10-term incumbent Rep. Michael Capuano in Massachusetts, as well as Reps. Ilhan Omar of Minnesota and Rashida Tlaib of Michigan during the 2018 midterm election cycle.)

Ocasio-Cortez maintained that she "didn't threaten a primary."

"What I DID say was that I had to go back to my district ... [and] explain why a pro-ICE amendment was slipped into a gun safety law," she tweeted.

The lawmaker added that it was "fine" for Democrats to have "ideological differences," but she denounced the "tactics" that had allowed "a small group" to force other Democrats "into actions that the majority disagree with. I don't think that’s right, and said as much in a closed door meeting."

Ocasio-Cortez has previously come under scrutiny for allegedly vowing to back primary challengers against party incumbents, and her involvement with the Justice Democrats has emerged as a source of tension on Capitol Hill. In January, veteran Democrats in Congress went on the record to express frustration with the newly-elected congresswoman's threats to back primary challengers against incumbents in safely-blue seats.

"I'm sure Ms. Cortez means well, but there's almost an outstanding rule: Don't attack your own people," Rep. Emanuel Cleaver, D-Miss., told Politico at the time, while Rep. Nydia Velázquez, a fellow Democrat from New York, noted, "Washington is a political animal where a lot of the work that you want to accomplish depends on relationships within the Democratic Caucus."

"She's new here, feeling her way around. She doesn't understand how the place works yet," Rep. Kurt Schrader, D-Ore., said of Ocasio-Cortez.

Rep. Yvette Clarke, another New York Democrat, said Ocasio-Cortez "needs to give herself an opportunity to know her colleagues and to give herself a sense of the chemistry of the body before passing judgment on anyone or anything."

Despite the criticism, Ocasio-Cortez promoted Justice Democrats in a nine-minute video later in January. She encouraged progressives to join the group's #OurTime project, which is focused on targeting longtime Democratic incumbents in safely-blue seats who are "demographically and ideologically out of touch with the voters in the districts," according to the group's website.

"There's a lot of people in the Democratic caucus. When we are courageous enough to just puncture the silence on an issue, they will start to move," Ocasio-Cortez says in the video. "If you're a one-term Congress member, so what? You can make 10 years' worth of change in one term if you're not afraid."