Ex-Colorado Gov. John Hickenlooper launches 2020 campaign: But is he a moderate or a progressive?

Hickenlooper was a successful governor of a purple state, who could be viable if he works out campaign messaging 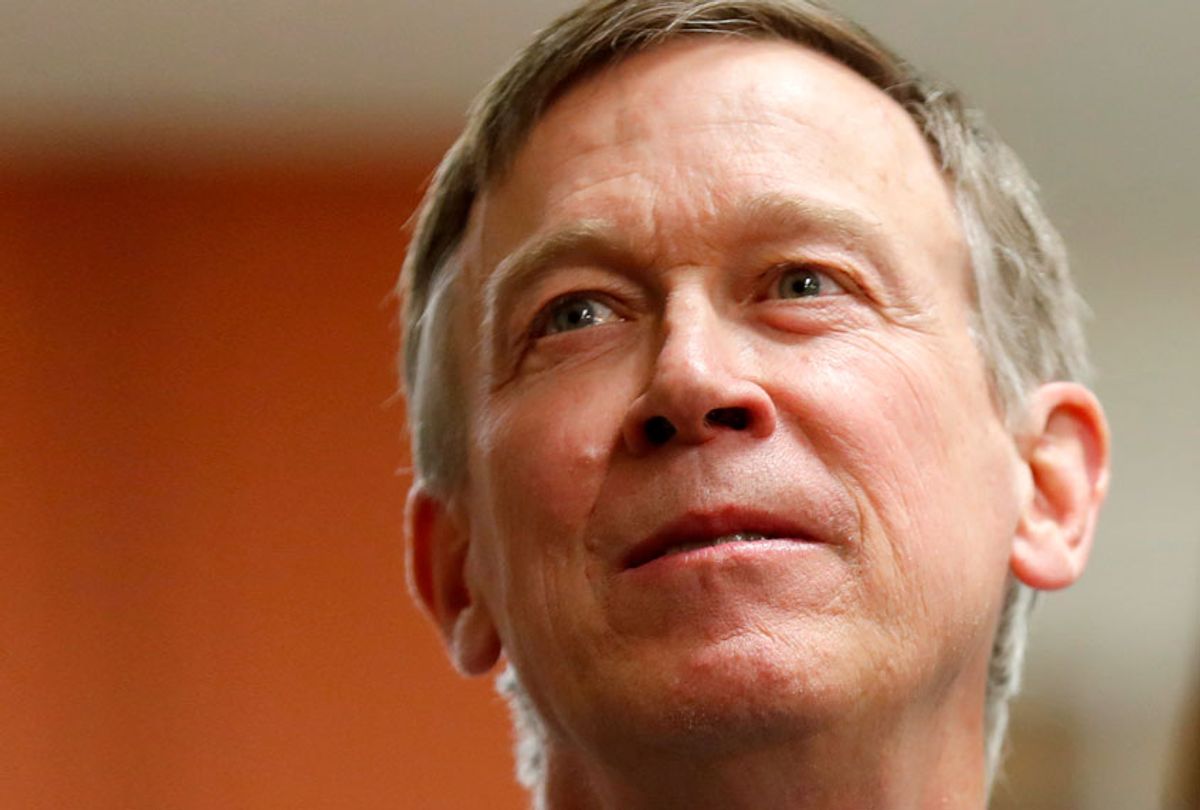 John Hickenlooper, the former Colorado governor who once described himself as an "extreme moderate," has announced that he will running for president in 2020, joining an already overcrowded Democratic field.

"I’m running for president because we need dreamers in Washington, but we also need to get things done. I’ve proven again and again I can bring people together to produce the progressive change Washington has failed to deliver," Hickenlooper explained in a campaign video announcing his reasons for running.

One of the challenges that Hickenlooper will face in his campaign is figuring out how to define himself. Despite succeeding in leading Colorado to a prosperous economy and passing landmark legislation involving environmental issues and gun control, there are concerns within his home state that he won't be an effective president.

"I don’t think John has at all defined why he is running. There are very few people I know who wake up and want to go caucus to support a raging moderate," Rick Ridder, a political strategist in Colorado who is friends with Hickenlooper, told The New York Times.

On the other hand, while Hickenlooper's moderate image could be a liability in the Democratic presidential primaries, it might also be an asset in the general election. As David Leonhardt of The New York Times observed in a column on Monday:

As frustrated as many Americans have become, most still don’t see themselves as radicals. About 35 percent call themselves moderate, compared with only 26 percent who say liberal, according to Gallup. Another 35 percent say conservative. Even among Democrats, only about half use the liberal label, with other half choosing moderate or conservative.

Hickenlooper has spoke with Salon in the past about his ideological views and what he believes a successful candidate and president will need to believe and do in the 2020s. As one example, he discussed his views on health care reform.

"I've been supporting and we've been working towards universal health care coverage in the State of Colorado system. The day I got elected, I stood firm and have always stood firm that health care should not be a privilege, it should be a right," Hickenlooper told Salon in July, adding that he views single-payer insurance, or "Medicare for All, as "more cost effective" than a patchwork of public and private insurance, but doesn't think it's achievable right now.

"I just think that we can't get there. I don't think we can get to universal coverage as quickly if we try to fight that battle now. I think that the imperative now should be to make sure everyone's covered, that we should get there first," he said.

The former Colorado governor also talked to Salon about his views on economic issues and making sure the Democratic Party listens to both the business community and economically disempowered Americans, such as those whose jobs have been shipped overseas.

Potential Democratic nominees "have to understand business," Hickenlooper explained. "They don’t necessarily have to be an entrepreneur or worked in restaurants or any of that stuff. They have to understand business. I think they have to be able to demonstrate that their concern includes everyone. That they’re really invested and have been invested in creating opportunities for everyone."

Hickenlooper also implied that political leaders of both parties have neglected Americans who were economically struggling.

"I think that the economy is going to be a big issue for the people, obviously in the midterms but I think also in 2020. I think we left a lot of people behind," he said. "In the 1990s when globalization took place, we outsourced so many of our businesses. Our corporations outsourced so many jobs that whole professions disappeared. People who got laid off, we gave them a little kit on how to write a résumé. We told them to make five phone calls a week and they could get their unemployment for six months. That was pretty much all we did. That was government malpractice."

Despite his established reputation as a consensus-building moderate, Hickenlooper also identified himself, at least to some degree, with the brand of progressive politics epitomized by Rep. Alexandria Ocasio-Cortez, D-N.Y.

He noted that Ocasio-Cortez was "being criticized for not moving to Washington right away -- everybody’s feeling she’s like all these other elected congresspeople, that she’s got lots of money. She’s a working person, which makes her unusual and makes her a strong voice for people that have been left behind," Hickenlooper told Salon. "I think that perspective of trying to speak up for the disenfranchised, speak up for the people that tend to be marginalized, I think that’s admirable. I don’t agree with everything that she says, but I think that … we share a majority of perspectives."

Hickenlooper has also appeared conflicted on medical and recreational marijuana use, both of which are legal in Colorado. As governor he oversaw the transition to legal cannabis use in the state, although he personally opposed the measure. He told Salon in a previous interview he was hesitant to allow medical marijuana for autistic people, although at least anecdotally many people find it helpful.