Part One: Back in 2013 the only person who saw Donald Trump as a serious threat to America was Vladimir Putin 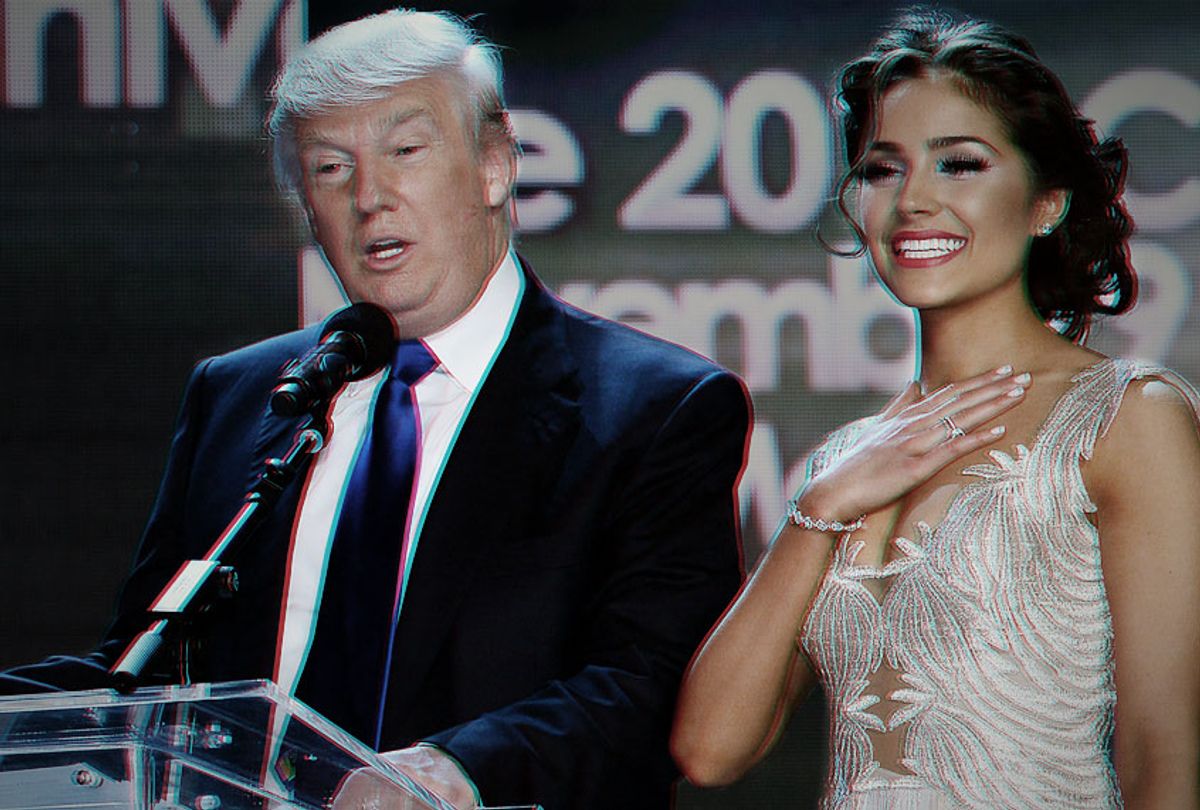 Do you remember where you were and what you were doing on June 15, 2013? Neither do I. But you can bet your last dollar that Donald Trump does, because he was in Las Vegas at his Miss USA pageant meeting with Aras Agalarov and his Russian pop-star son Emin about bringing Trump’s Miss Universe Pageant to Moscow later that year. Aras Agalarov, sometimes called the “Trump of Russia,” is a billionaire oligarch close to Vladimir Putin who runs a vast real estate empire, including the Crocus City development in Moscow.

Agalarov agreed to pay Trump more than $10 million for the right to put on the pageant in Crocus City later that year, but his is a name we wouldn’t learn of for another four years, until July of 2017, when it would be revealed that the Agalarov family was part of the connective tissue behind the infamous meeting in Trump Tower in June of 2016 which put together the top managers of Trump’s presidential campaign — Donald Trump Jr., Paul Manafort, and Jared Kushner — with six Russians connected to the Russian government who had told Trump’s son that they had “dirt” on Hillary Clinton they wanted to share with the Trump campaign.

Donald Trump didn’t want us to know in June of 2016, and later in July of 2017 that his son, son-in-law, and campaign chairman were meeting with Russian nationals, which is why Trump and officials of the Trump campaign lied all the way through the campaign in 2016 that they had any contacts at all with Russians, and it’s why Trump himself lied after the Trump Tower meeting was revealed in 2017 when he personally dictated a statement released to the press describing the meeting as an inconsequential discussion about “adoption” rather than the discussion about Russian involvement in the Trump campaign that it was.

So let’s go back to that day in 2013 when Donald Trump first met with the man who would provide a conduit between the Russian government and Trump’s campaign. Let’s have a look at what Donald Trump and Vladimir Putin were up to before the 2016 presidential campaign was underway, long before Trump himself showed up on anyone’s radar as one of the Republicans who were beginning to think of running for president.

Trump quickly got busy stroking Agalarov’s friend, the president of Russia. A few days later, Trump tweeted, “Do you think Putin will be going to the Miss Universe Pageant in November in Moscow — if so, will he become my new best friend?”

The very next month, while Trump was making his plans to visit Moscow, something called the Internet Research Agency was incorporated in Russia with the Russian government. We had no way of knowing that this took place, of course. Nor did we know that in 2018, the Internet Research Agency and 12 of its employees would be indicted for infiltrating agents into the United States and setting up the internet infrastructure necessary to carry out what the indictment called “information warfare” in an attempt to interfere with the election of 2016 and defraud the United States government.

So while the Internet Research Agency was staffing up in its offices in St. Petersburg, Donald Trump was talking about the president of Russia. Twice during the month of October, Trump flattered Putin. He told CNN host Larry King, that Putin “has done a really good job of outsmarting our country,” and during an appearance on the David Letterman show, Trump called Putin “a tough guy . . . I met him once.”

The next month, Trump was in Moscow with the Miss Universe pageant. Trump had invited the Russian president to be his guest at the pageant, but the fact Putin passed didn’t slow down Trump, however. He gave an interview to MSNBC, and when asked if Putin would be attending, Trump said, “I do have a relationship (with Putin) and I can tell you that he’s very interested in what we’re doing here today . . . I do have a relationship with him . . . He’s done a very brilliant job in terms of what he represents and who he’s represented.”

Trump also received a phone call from Dmitry Peskov, Putin’s top aide and press spokesman. Mr. Peskov would next be heard from in December of 2018, when he responded to a question about Michael Cohen’s conviction for lying about Trump’s Moscow Tower project by admitting that there had been emails and phone calls between the Russian government and Trump’s representatives about Trump’s Moscow tower project, but denied that they had gone anywhere.

The project was still alive in 2013, however. Trump had multiple meetings about his plans for a Trump Tower while in Moscow. He met with Vladimir Kozhin, an intimate of Vladimir Putin and the head of “property management” for the Kremlin, responsible for all major development projects in Russia. He had dinner with Agalarov and Herman Gref, the chief executive of Sberbank PJSC, Russia’s biggest state-controlled bank. Trump met with one Alex Sapir, who was involved in the company that helped to develop the Trump Soho Hotel, along with Felix Sater, a convicted felon and FBI informant who will be testifying before the House Intelligence Committee next week. Before leaving Moscow, Trump tweeted his thanks to Aras Agalarov, telling him excitedly, “TRUMP-TOWER MOSCOW is next.”

@AgalarovAras I had a great weekend with you and your family. You have done a FANTASTIC job. TRUMP TOWER-MOSCOW is next. EMIN was WOW!

That same month, as part of a delegation in Moscow for the National Rifle Association, Republican political operative Paul Erickson made the acquaintance of Maria Butina, a young Russian woman who had been trying to get a visa to attend NRA conventions in the United States for two years. After meeting Erickson and spending time with the NRA’s delegation, Butina would be granted a visa to attend the next NRA meeting in April of 2014. Butina is currently cooling her heels in a Washington D.C. jail, having plead guilty to illegally acting as a Russian agent. She is said to be cooperating with Robert Mueller’s investigation of the connections between the Trump campaign and the Russian government.

Trump wasn’t finished bragging about his fabulous relationship with Putin and flattering the Russian president. Three months later, on February 10 during an interview on Fox and Friends, Trump said, “When I went to Russia with the Miss Universe pageant, he [Putin] contacted me and was so nice. And, you know, I mean the Russian people were so fantastic to us. I can say this. They are doing — they’re outsmarting us at many turns.”

They certainly were “outsmarting us.” As Trump made the rounds of talk shows flattering Putin, the Russian president was moving troops into position along the border with Ukraine and its Crimean peninsula. A few days after Ukrainian president Viktor Yanukovych was ousted from power and fled to Moscow under Russian protection, Putin sent Russian soldiers wearing unmarked uniforms across the Ukrainian border and into Crimea. Within a few days, they had taken control of Ukrainian territory along the border with Russia and the entirety of Crimea. It was the first incursion into another country and seizure of territory within Europe since World War II.

About two weeks later, on March 6, Trump was in Maryland for the annual CPAC convention. Trump told the crowd that he had recently returned from holding his Miss Universe pageant in Moscow. “They treated me so great,” Trump bragged to the gathering of conservative activists, which only a couple of decades previously would have reacted in horror to any Republican speaking that way about Russia. “Putin even sent me a present, a beautiful present,” Trump crowed. The crowd was impressed.

That same day, President Barack Obama signed an executive order imposing sanctions on Russia for its invasion of the Ukraine and seizure of Crimea. Among the top-level Russian officials specifically sanctioned was one Vladimir Kozhin, Putin’s head of “property management” for the Russian government. Three months previously, Kozhin had been meeting with Donald Trump in Moscow about his plans to build a Trump Tower in the Russian capital.

One month later, on April 12, in an interview on Fox News, Trump told Eric Boling that Putin “has done an amazing job of taking the mantle, and he’s taken it away from the president [Obama] and you look at what he’s doing — so smart. When you see the riots in a country [Crimea] because they’re hurting the Russians, okay, we’ll go and take it over . . . You have to give him a lot of credit.” When he was asked who was the better leader, Putin or Obama, Trump replied, “It’s not any contest.” Putin has “played Obama like a fiddle,” Trump told Boling.

So right after Putin invades a sovereign country and seizes a big piece of it by force, and right after President Obama takes a stand on behalf of the American people against Putin’s aggression, Trump is running around blabbing to anyone who will listen what a great leader Putin is, how he’s showing up the United States of America and making us look like fools. What in hell do you think was on Trump’s mind?

If I were to take a big, wild guess, I’d say it was running for president. Back in Moscow, Trump’s BFF was staying busy.  Apparently on Putin’s orders, the Internet Research Agency had formed what it called the “Translator Project,” which was tasked with interfering and disrupting the U.S. political system. By July, more than 80 employees would be assigned to the project and two Russians would be on their way to the United States traveling with visas obtained under false pretenses. They would steal American identities, establish fake Facebook, Twitter, and Instagram accounts, and begin spending tens of thousands of dollars on behalf of Republican candidates in the 2014 midterm elections and eventually Donald Trump when he began running for president a year later.

Twelve Russians working for the Internet Research Agency and Yevgeny Prigozhin would be indicted for interfering with the presidential election of 2016 and defrauding the U.S. government. Prigozhin was charged with financing the Internet Research Agency. In Moscow, he is known as “Putin’s chef,” a reference to restaurants he owns and dinners he has given for the Russian president. Prigozhin is among those under sanctions imposed by President Obama in retaliation for the annexation of Crimea, ordered by Trump’s good friend, Vladimir Putin.

In 2013 and 2014, we didn’t know any of this. But one man did: Putin. And he had his eye on the man who was running around the United States singing his praises: Donald Trump.

NEXT UP: More stuff that we didn’t know that was going on in 2014 and 2015, and one thing we did know: Trump came down the famous escalators and announced he was a candidate for president of the United States.