Can Bernie Sanders make reparations? His personal reboot on racial justice may not be enough

He won over progressives with big ideas in the 2016 primary. Why is he so reluctant to talk reparations in 2020? 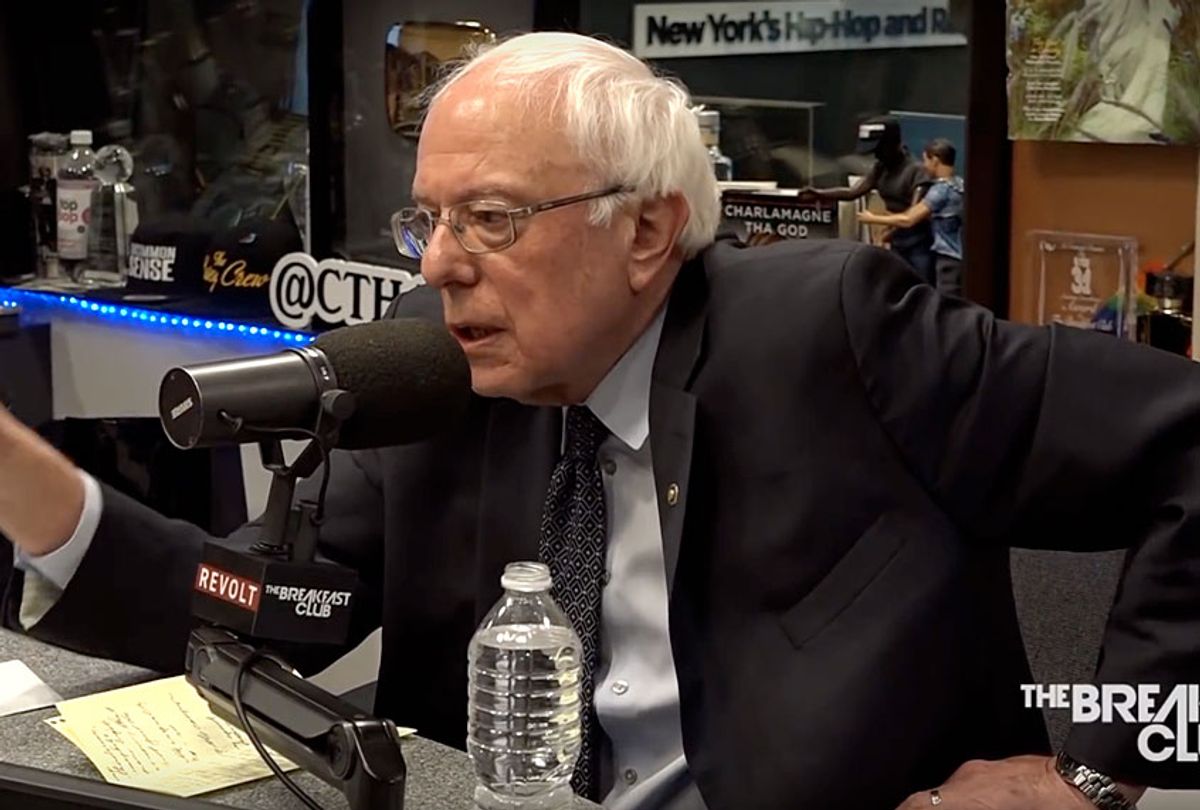 This time around, Sanders has elevated a new, more diverse senior campaign staff and has incorporated more of his personal narrative into his policy-driven stump speech. After holding his first official campaign rally of this cycle in front of a diverse crowd of Brooklyn supporters, alongside at least three featured African-American speakers, Sanders traveled Sunday to Selma, Alabama, to take part in commemorations for the anniversary of “Bloody Sunday,” the 1965 demonstration on the Edmund Pettus Bridge where civil rights activists were beaten by Alabama state troopers.

He then went to the University of Chicago, where he noted that as a student activist he took part in civil rights protests. But on one particular issue of racial justice, Bernie Sanders’ personalized reboot is still lacking.

Generations of leaders have called for a national conversation on race as necessary for true racial justice and equity in this country. (That didn't start with Barack Obama.) But an unwillingness to discuss reparations -- at least as a general avenue for redress to historic and systemic racism -- is a way to shut down that conversation. Bernie Sanders needs a better answer on reparations for the black descendants of slavery in the United States, and he needs it soon.

When confronted three times in the last week about why he doesn't support the concept of reparations, Sanders simultaneously acknowledged the disparate, particular and targeted abuses meted out to African-Americans by the U.S. government and large industries for centuries while also dismissing the need for specific race-based resolution and redress.

At a CNN town hall, Sanders said: "We're going to do everything we can to put resources into distressed communities and improve lives for those people who have been hurt from the legacy of slavery." But when asked about reparations specifically, he shot back: “What does that mean? What do they mean? I’m not sure anyone is very clear.”

At least three of Sanders’ Democratic rivals — Elizabeth Warren, Kamala Harris and Julián Castro — had already voiced their support for reparations, albeit in highly general terms and without specifics. So Sanders should’ve been better prepared for the question.

When “The View” co-host Sunny Hostin asked Sanders the same question days later, he offered a rationale for his dismissal of the idea, arguing that there are "better ways" than "just writing out a check."

“I think that right now our job is to address the crises facing the American people in our communities."

Sen. @BernieSanders says he doesn't support reparations for slave descendants because there are "better ways" than "just writing out a check": “I think that right now our job is to address the crises facing the American people in our communities." https://t.co/f8u2wc159S pic.twitter.com/Tll5j2iDaD

Then when asked specifically about the idea of “straight cash payouts” for descendants of slaves during an appearance on “The Breakfast Club” on Monday, Sanders offered a truly cringe-worthy response.

“No,” Sanders said, before adding: “Well, then there’s a check to every Native American who were nearly wiped out when the settlers first came here.”

That response sounds like the 2020 equivalent of responding “all lives matter” when asked whether black lives matter on the 2016 campaign trail. Even aside from Sanders' apparent premise —  laughing off the idea that the government provide cash payments to Native American tribes in order to dismiss the same idea for slavery descendants — his slow progression on this issue makes clear why the conversation is necessary.

Party primary campaigns are the stage on which policy and ideas are debated by the national party after being incubated and promulgated by smaller groups. The 2020 Democratic primary is already proving to be full of bigger and bolder ideas than ever before. More than anyone else, that is thanks to Bernie Sanders.

He ran on big ideas in 2016 and is following through on that in 2020, pushing the realm of political possibility to include the Green New Deal, court packing, abolishing the filibuster and a universal basic income. Unburdened by the fear that the right wing would smear him as a socialist, Sanders’ unabashed record gave him the confidence to defend his bold demands in 2016, even with the evident likelihood that a Democratic president would face oppositional control of Congress.

Sanders is perhaps making a politically astute calculation this time that favoring more universalist measures for wealth distribution is more effective, in electoral terms, than advocating race-based programs. But what’s the moral principle at work in acting as if financial redress to black and Native people remains too taboo this early in the Democratic primary season?

Of course, giving $50,000 to every black person in the country wouldn’t solve the racial wealth disparity. But any attempt to debate what is fairly owed would go further in educating the country on the brutality of anti-black injustice in America than anything since the premiere of Alex Haley’s “Roots” miniseries. Like Donald Trump and Obama, Sanders has demonstrated an understanding that real, substantive change requires a cultural paradigm shift that is led by rhetoric.

There is little evidence to suggest that holding such a conversation in the Democratic primary would throw the general election to Trump — or at least any more than the House resolution on the Green New Deal will. It's primary posturing that will be forgotten well before the convention. Reparations, especially in the form of direct cash payments, are not going to be a defining issue in this election. And to be fair, no serious reparations advocates are talking about straight cash payouts. Most policy proposals focus on grants for home ownership and renovation, small business loans, scholarships and community investment projects like parks, schools and mass transit. So why not talk about reparations as a way of talking about race?

Sanders, with his reputation as a radical willing to platform the previously shut-out ideas of the progressive base, could be the perfect messenger. Instead, he cites his endorsement of a piecemeal plan for federal investment in low-income communities sponsored by House Whip Jim Clyburn, a Congressional Black Caucus member who is far more moderate than Sanders.

What’s curious about this strategy is that unlike Hillary Clinton in 2016, or the numerous Democratic senators running for president this time around who have adopted Sanders’ 2016 platform, he has never tried to play the game of pragmatism, touting incremental gains as small victories in the larger march towards progress. Sanders’ platform is full of programs that would certainly struggle to get even majority Democratic support in Congress. If he believes his universalist policies can close the racial wealth, health and education gap by wider margins than race-specific efforts like reparations -- and that's theoretically possible -- then Sanders should say that.

Sanders’ civil rights background is a vital part of his personal narrative, which he's mostly that kept muted until now. That he appears unwilling to tackle the boldest race-specific debate since those years a sense of hesitation that undercuts his reboot as a social and class justice warrior. Despite his enduring popularity and continued support, Sanders faces a far more competitive field this time, with candidates whose policies seem nearly indistinguishable from his own. The reparations issue is a troubling place for Bernie Sanders to establish himself as a fiscal conservative.