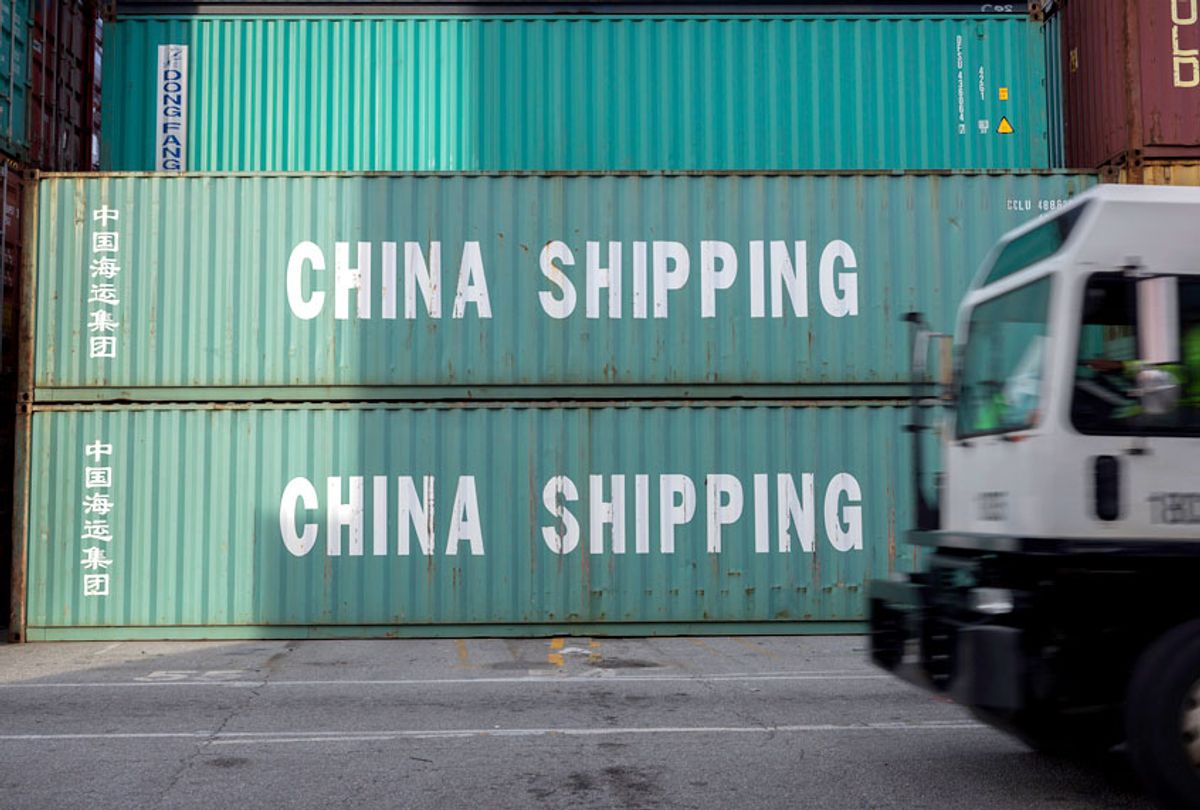 A stack of 40-foot China Shipping containers at the Port of Savannah in Savannah, Ga. (AP/Stephen B. Morton)
--

The Trump administration said Wednesday that the United States trade deficit in goods skyrocketed to $891.2 billion last year, the highest deficit in the country’s history.

The Commerce Department said in a report, which was delayed by the longest partial shutdown in history, that the United States imported nearly $900 billion more goods than it exported overseas, the Washington Post reported. Despite President Trump’s tough stance and tariffs on trade with China, the American trade deficit with China also hit a record $419 billion.

When factoring in the services sector, the deficit grew to $621 billion, the highest since the 2008 global recession and about $100 billion higher than it was when Barack Obama left office.

Economists pointed to Trump’s $1.5 trillion tax cut on corporations and the rich as a key driver of the trade deficit, That led to increased purchases on imports while a rising dollar limited exports, the Post reported. Trump has boasted of a trade deal with China that the administration hopes to complete in the near future, but economists say any such deal would only divert exports from other countries, shrinking the gap between the U.S. and China but leaving the overall deficit largely unaffected.

The news comes after Trump insisted that a trade war with China would be “good” and “easy to win.” Trump attacked Obama over the deficit for years, accusing him of “bankrupting our country” and calling the trade deficit “one of our greatest national security threats.”

“When you’re already $500 billion DOWN, you can’t lose!” Trump declared on Twitter last April as the trade deficit exploded under his watch.

Now Trump’s tough talk on trade is undercut by reality, as with his inability to get a dollar in funding for his promised border wall (the one Mexico was supposed to pay for) despite two years of Republican control of Congress. Other such examples might include the rising budget deficit and debt he vowed to completely eliminate, and the nuclear deal with North Korea that failed to materialize.

These policies have not only failed to produce the results that the president repeatedly promised and built his platform around, they have also resulted in painful real-world consequences.

Farmers in the Midwest, a key part of Trump’s voter base in 2016, are going bankrupt at record rates as a result of Trump’s trade policies.

A study by economists at the New York Federal Reserve, Columbia University and Princeton University found that the trade war is costing consumers and companies $3 billion per month in added tax costs.

“When we impose a tariff, it is the domestic consumers and purchasers of imports that bear the full cost of the tariffs,” Columbia economics professor David Weinstein wrote in the report. “The costs of the trade war are quite large relative to optimistic estimates of any gains that are likely to be achieved,” the report said.

Despite Trump claiming as recently as last weekend during a speech at CPAC that “billions of dollars” are “pouring into our Treasury,” the study found that all the cost of the tariffs he has imposed have been paid for by American consumers and companies.

As Trump said in a 2012 tweet attacking Obama, “China is robbing us blind in trade deficits and stealing our jobs, yet our leaders are claiming 'progress' -- SAD!”

A second study by economists at Columbia, Yale, UC Berkeley and UCLA came to a similar conclusion and noted that the policies have hit Republican-leaning areas the hardest.

"Workers in very Republican counties bore the brunt of the costs of the trade war,” the report said, “in part because retaliations disproportionately targeted agricultural sectors, and in part because U.S. tariffs raised the costs of inputs used by these counties.”