Britain is rethinking all of its foreign ties, not simply with Europe

Why is England moving away from the US and toward China? Is the relationship still Special? 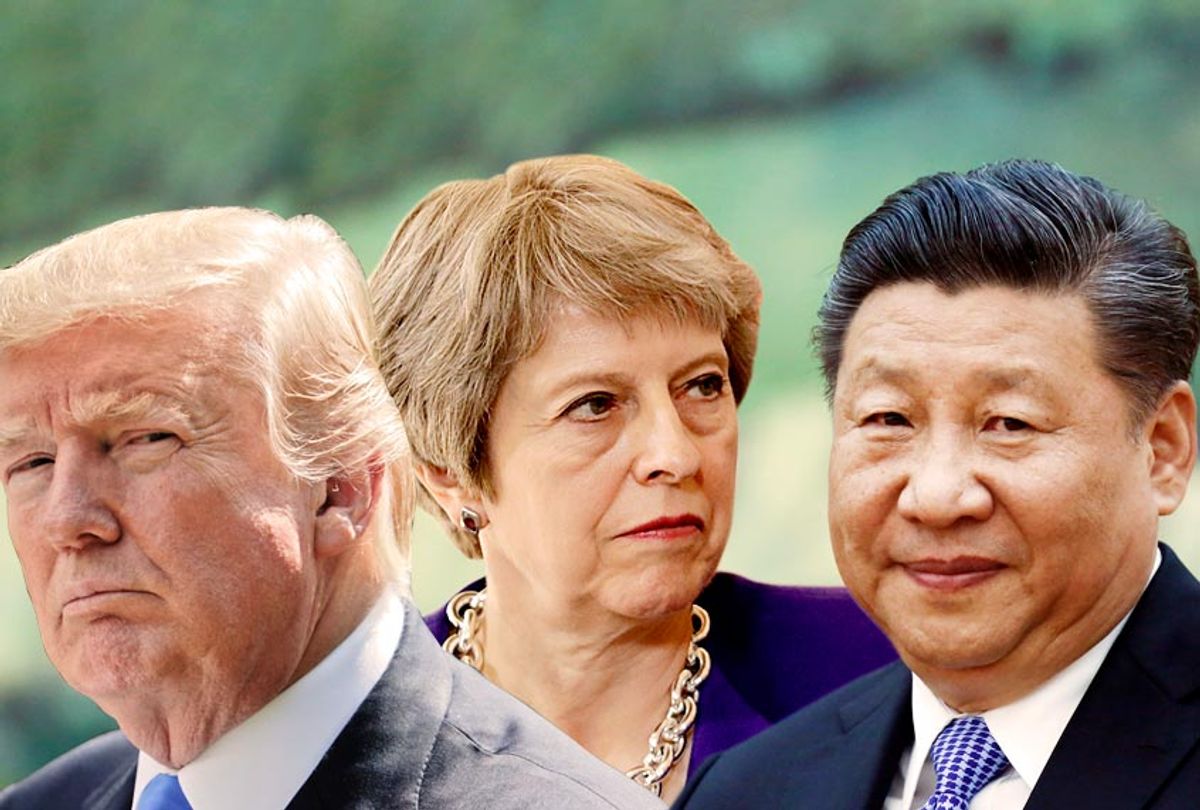 In addition to its atavistic Brexit insanity, Britain has apparently been rethinking many of its major foreign relationships. Recently, Britain has taken steps that weaken the Special Relationship with the United States and has moved noticeably closer to China on key economic and technological issues.

This should not come as a complete surprise. One of Britain’s guiding shibboleths comes from its famed 19th century Foreign Secretary, Lord Palmerston. In 1848, he stated that Britain had “no eternal allies, and… no perpetual enemies. [Britain’s] interests are eternal and perpetual, and those interests it is our duty to follow.” Thus, after (and certainly during) World War II, Britain’s interests dictated closer relations with the U.S., against whom it had previously fought as much as it had been an ally. These two countries concluded several foundational joint agreements in that period, including the 1941 Lend-Lease Act, the 1943 BRUSA Agreement for cooperation in military intelligence, the 1944 Bretton Woods Agreement on global finance and postwar reconstruction, and the 1945 United Nations Charter. However, there was always an underlying tension between them, even during the war, symbolized by the infamous dismissal of U.S. airmen in Britain as “oversexed, overpaid, and OVER HERE!”

Thus, if a better offer came along, Britain was constitutionally inclined to consider it. And other offers have come, most recently from China, America’s rising rival for global influence. And Britain has occasionally accepted these offers, to the detriment of the Special Relationship.

Three examples illustrate Britain’s reassessment of its relations with the US, in the institutional, economic, and technological realms.

Institutionally, in 2013 the People’s Republic of China (PRC) announced it would create a new financial institution, an Asian Infrastructure Investment Bank (AIIB), to provide financing for infrastructure projects across Asia and the neighboring regions. The United States was instantly hostile, suspecting a dual Chinese challenge, an institutional one to the role of the U.S.- (and U.K.) created World Bank at Bretton Woods, and a soft power challenge, as the AIIB would extend Chinese regional economic power. The U.S. strongly urged its allies to maintain a united front and remain outside of it, as the U.S. had suggested in 1997, when Japan unsuccessfully proposed the creation of an Asian Monetary Fund.

This time, however, Britain publicly agreed to join the AIIB as the first Western member. This action came as a tremendous shock, as the Conservative British government defied overt U.S. pressure and ignored strong objections from its own Foreign and Commonwealth Office. Prime Minister David Cameron specifically supported Chancellor George Osborne’s initiative to join the AIIB first for commercial reasons, where the two men put Britain’s new commercial interests with China ahead of its established diplomatic relations with the US. Several other European countries joined shortly thereafter, but it was Britain that broke the dam, giving the U.S. only 24 hours’ advance notice of its decision. The Obama Administration strongly condemned this major affront, with one senior U.S. official complaining about Britain’s “constant accommodation” of China. According to the New York Times, “For China, British membership in the bank was a defining moment”, both for the AIIB and its subsequent Chinese successors, the BRICS Development Bank and the Belt and Road Initiative, which represented a fundamental step away from the world designed by the Anglo-American alliance of the 1940s. This would not be the last time a Conservative British government would put short-term commercial and political goals ahead of its own professional civil service assessments, and harm relations with the U.S.

Second, of course, is the economic catastrophe of Brexit. To be fair, Brexit reflects Britain’s eternal ambivalence toward Europe and this unspeakable act of self-harm was undertaken for entirely domestic (and delusional) reasons. That said, as America’s recognized emissary to the EU, Britain’s withdrawal from Europe has damaged U.S. economic influence within Brussels, a consequence the Americans had not anticipated.
In April 2016 at the Foreign Office in London during the Brexit campaign, President Obama expressed the U.S. view of Brexit: “[M]aybe some point down the line there might be a U.K.-U.S. trade agreement, but it’s not going to happen any time soon because our focus is in negotiating with a big bloc, the European Union, to get a trade agreement done . . . The UK is going to be in the back of the queue.” That pointed advice fell upon deaf ears and Britain voted to leave the EU, to the frustration of the U.S. and 48.1 percent of the British population.

It is critical to understand that Brexit’s poisonous kiss, and the withdrawal from the Special Relationship more generally, has been the consequence of policies implemented almost entirely by Britain’s Conservative Party. Ironically, Labour’s Tony Blair was Britain’s most EU-friendly Prime Minister, even though his party held a traditional distrust of the EU (which Jeremy Corbyn still shares). But Blair was clear where his ultimate allegiance lay: Blair firmly placed relations with the U.S. ahead of those with the EU, choosing to join the Iraq war at President Bush’s behest over the frenzied opposition of his French and German counterparts. The AIIB entry and the Brexit referendum were exclusively the decisions of Conservative Prime Minister David Cameron and it is upon him and his party that the responsibility should be placed.

Finally, Britain’s current attraction to Chinese technology has thrown this divergence with U.S. policy into high relief. The approach toward the Chinese telecom company Huawei is a new litmus test for U.K.-U.S. relations, as is the future of 5G wireless communications in Britain. Huawei is the world’s largest telecom company and by 2020 will be the world’s largest seller of smartphones. Huawei is also the PRC’s technology champion and a beneficiary of consistent governmental financial and political support.

The Conservative Party has a history of looking favorably upon Huawei. On a 2015 trip to China, Conservative Chancellor George Osborne, described Huawei as a “fantastic company with a . . . great future in the U.K.”. A U.S. security analyst acerbically replied that “Britain is so deeply in bed with Huawei, it couldn’t get out if it tried.”

By contrast, the Trump Administration is currently rallying its allies to reject Huawei’s participation in building 5G in their countries, over national security and industrial advantage issues. It is not simply that Sabrina Meng, Huawei’s CFO and daughter of Huawei’s founder Ren Zhengfei, was arrested on December 1, 2018 for evading U.S. sanctions on Iran, or that a Huawei employee, Wang Weijing was arrested in Poland on espionage charges. It was also that on January 28, 2019, U.S. Attorney General Matthew Whitaker, America’s senior law enforcement official, himself unveiled 23 charges against Huawei, which included ten charges of corporate espionage, as well as obstruction of justice, and wire fraud charges. This echoed the 2012 U.S. House Intelligence Committee conclusion that Huawei was an active agent of the PRC and that its technology was being used for espionage.

This perception of Huawei as a national security threat has been echoed by the Five Eyes (the intelligence services of the U.S., U.K., Canada, Australia, and New Zealand and the descendant of the 1943 BRUSA agreement), all of whom have quietly but vehemently expressed concerns that Huawei should not be allowed to install 5G technologies in their countries, due to Huawei’s alleged participation in espionage on behalf of the Chinese government. New Zealand and Australia have refused to allow Huawei to participate in their 5G construction, and Chinese-Canadian relations are bitter right now.

However, as with the AIIB, on February 17, 2019 Britain’s Cyber Security Center astonishingly announced that the risks to Britain from using Huawei’s 5G equipment could be mitigated. This was yet another groundbreaking example of the British government breaking from the group of Western allies, publicly rejecting a clear U.S. strategic concern, and doing so in opposition to the analysis of another branch of the British civil service. Two days after this bombshell announcement, the British Royal United Services Institute, a U.K. military think tank, released a report written by former U.K. diplomat and Chinese expert Charles Parton, which stated that permitting Huawei equipment to be used in U.K. 5G networks would be “at best, naïve, at worst irresponsible.” Again, the British government moved in the direction of commercial advantages from China at the expense of its traditional diplomatic and security relations with the US.

To be fair, the United States rarely considers British interests in the formation of its own policies. Neither presidents Obama nor Trump prioritized the Special Relationship in their reactions to the AIIB and Huawei and Britain is fully within its rights to blaze its own path. But the terrible irony of Britain’s explanation of its entry into the AIIB was David Cameron’s government stated that they could have more influence on the institution from the inside, a view they later rejected over the EU and Brexit.

Following Palmerston’s dictum, the British government under Conservative leadership has repeatedly weakened its defining 20th century American alliance to advance a 21st century mercantilist collaboration with China. Britain’s fundamental reassessments of its foreign relations now include Europe, the United States, and China, as she plots an increasingly erratic course forward. Having lost her empire, her status as a Great Power, and much of her influence, Britain is now struggling to accept her diminished station within the constellation of nations. That said, publicly subverting U.S. policies in pursuit of Chinese munificence seems a sad end to a history rich with finest hours.