Donald Trump admired the Russian badass's macho posturing, Putin was happy to have the attention

Russia Scandal Part 2: Trump didn't know much more about Putin than what's on cable news, but he liked what he saw 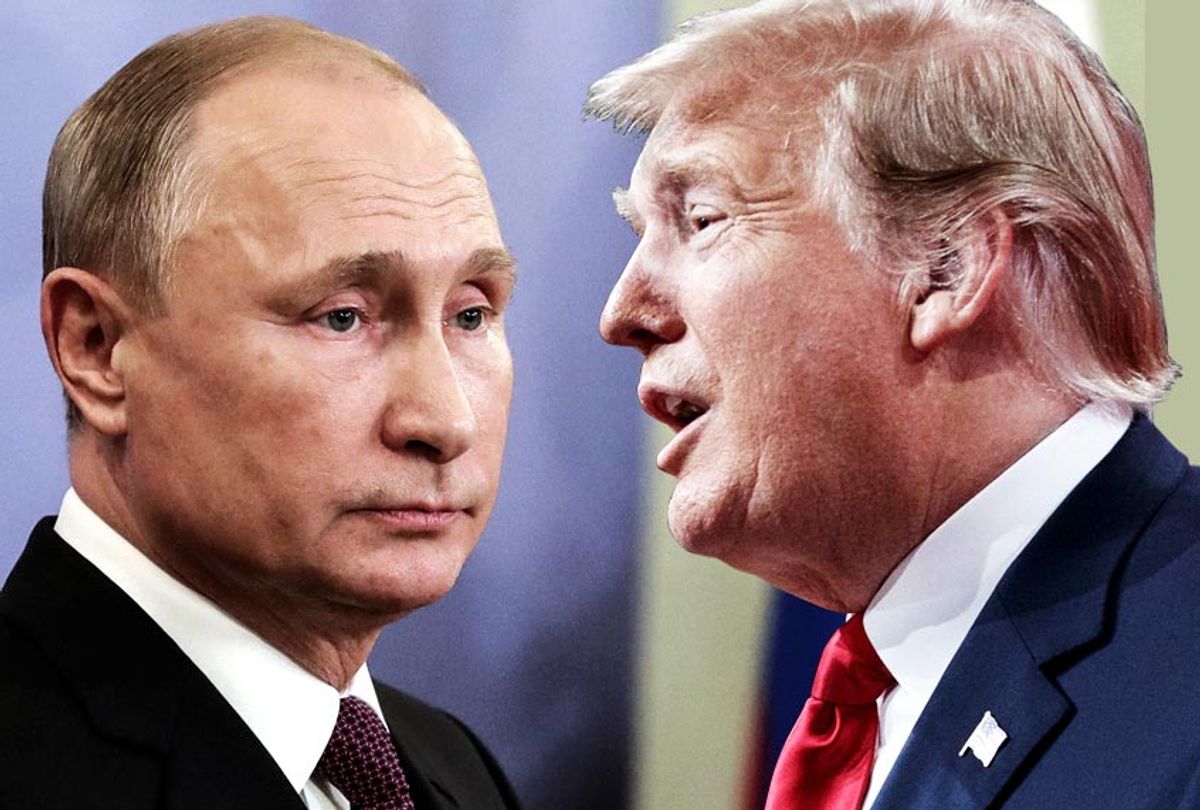 When last we gathered to have a look back at how the 2016 election was stolen, we were discussing a day when that lesson was driven home with a vengeance. On March 6, 2014, when President Barack Obama imposed sanctions on Russia for its invasion of Ukraine and seizure of Crimea, he was doing what every president in the modern era had done before him. We express our condemnation of transgressions by foreign powers we disapprove of all the time. We sanctioned Iran for its nuclear program. We sanctioned Syria for its support of terrorism and human rights abuses. We have sanctions against North Korea for its nuclear and missile programs and against Venezuela for its anti-democratic and human rights violations.

What Obama did not know, and we did not know on March 6, 2014, was that he was setting the stage for how the presidential election of 2016 would not only be fought between two American political parties, but interfered with by a hostile foreign power, aided and abetted by then candidate Donald Trump.

What Trump did later on the same day Obama sanctioned Russia should have given us a hint of what was to come. He went to the CPAC convention, took the stage, and once again praised the autocratic leader of the nation that had pissed us off enough by its seizure of Crimea that we imposed sanctions on a passel of Russian oligarchs, Putin pals, and financial institutions and industries.

A month later, Trump was on Fox News telling viewers who only two years hence would become known as the “Trump Base” that he thought Putin was “very strong,” and that he “played Obama like a fiddle.”

A month after that, he was standing on a stage in Washington D.C. at the National Press Club telling the assembled pixel-wrought wretches that he had been in Moscow, where he “spoke indirectly and directly with President Putin who could not have been nicer. And we had a tremendous success.”

Three weeks later, on June 20, he gave an interview to the conservative American Spectator and basically endorsed remarks Putin had made criticizing the idea that America was exceptional. “And I understand that,” Trump said. “You know, he [Putin] said, ‘Why are they exceptional? They have killings in the streets. Look at what’s going on in Chicago and different places. They have all of this turmoil, all of the things that are happening in there.’”

Almost exactly one month later, a Buk surface to air missile from Russia’s 53rd Anti-Aircraft Brigade was used by pro-Russia insurgents in eastern Ukraine to shoot down Malaysia Airlines Flight 17, killing all 283 passengers and 15 members of the crew onboard. The Buk missile battery was hurriedly moved back across the Ukrainian border into Russia and hidden after the civilian airliner was shot down. The Russian government began a campaign of denial that its occupation of Ukrainian land and support of Ukrainian insurgents had anything to do with the shoot-down.

What the hell was Trump doing back in 2014, running around the country telling anyone who would listen what a fantastic leader Vladimir Putin was, how he was “strong,” while our own president was weak? Here was an autocratic leader of a hostile foreign nation that had just invaded another country, seized its territory, and supplied the weapon used to commit one of the largest civilian aircraft atrocities in history. And this guy was the national leader Trump looked up to?

WTF was going on with Trump and his love affair with Vladimir Putin?

Recent revelations that Trump was pursuing a deal to build a Trump Tower in the center of Moscow during the campaign of 2016 raised suspicions that Trump was flattering Putin to get the Russian leader to approve the deal. But I think it’s way, way deeper than that. I think Trump looked at Putin, and he said to himself, that’s the kind of leader I admire. He runs his country with a strong hand. He gets things done. Trump actually admired the guy. Putin ran Russia by fiat, and Obama was “weak” because he adhered to democratic rules and norms.

I don’t think Trump had to know much more about Putin than what he saw on cable news, but that was enough. He was a tough guy. He took a country that was, if not a real democracy, something close to it, and he transformed it into an autocracy. In 2014, when Putin saw Ukrainian president Viktor Yanukovych forced from power right next door by a popular uprising that was driven in part by social media, he decided the influence of the west was getting too close for comfort and moved to destabilize Ukraine with his invasion and seizure of Crimea.

When Obama cracked down with sanctions, Putin started making moves to infiltrate and destabilize the United States political system. He started up the Internet Research Agency and empaneled its “Translator Project” and sent at least two Russian agents into this country armed with dollars and technical expertise they would use to establish propaganda outlets on Facebook, Twitter, and Instagram. He called in the top officials of his intelligence agency the GRU, and he said, you guys start looking around for some way to fuck things up over there in the United States for me, okay? We’re not going to take this sanctions shit lying down.

And Putin started looking around and asking himself, gee, who can I cozy up to over there who might be susceptible to lifting those goddamned sanctions?

See, “sanctions” aren’t just pieces of paper presidents of the United States sign to needle foreign leaders and try to bring them back in line. Sanctions are a powerful tool used to project power because of where they come from: the USA. You start telling officials of a foreign government like, say, Russia that they can’t travel to the United States, they can’t facilitate deals here on behalf of corporations from that country, and most importantly, they can’t move millions and billions they’ve skimmed off their economy through American financial institutions . . . well, that fucking hurts, and hurts badly.

You start telling foreign companies in Russia like the oil and gas giant PJSC Roseneft Oil Company that they can’t make deals with American companies like ExxonMobil Corporation to drill for difficult-to-get oil in the far reaches of the icy Russian north, and that fucking hurts.

And when you deny Russian state-owned banks and other financial institutions the ability to make big international deals that have to use the nexus of banking and investment headquartered in New York, that fucking hurts.

So the sanctions Obama imposed in March of 2014 weren’t some little pain in the ass for Putin. They were a major threat to his power. They cut deeply into the Russian economy. They caused financial pain to billionaire allies and business partners he needed to maintain his political power inside Russia. Putin’s sitting there in Moscow, and he’s looking at a nearby leader unnervingly similar to him, Yanukovych, another crook who’s running his government like a personal piggy bank, and he’s watching Yanukovych get thrown out, and he’s thinking, this could happen to me.

How to survive as an autocratic leader is in Putin’s blood. In 1989, he was a KGB agent serving in the city of Dresden in East Germany when almost overnight, the autocratic government of that Russian satellite nation fell. Putin stayed up all night burning KGB and Stasi secret records when the wall came down. He returned to Russia convinced, as he said later, that the fall of the Soviet Union was “the greatest catastrophe of the [20th] century.” In short order, he began a campaign to rise to power in Russia and make certain the same fate would never befall him.

One year after Obama imposed sanctions on Russia, Trump descended the escalators in Trump Tower and announced he was running for president. And only a few weeks after that, Trump was in Las Vegas taking questions at something called “FreedomFest,” and a young woman stood up and asked him if he was elected president, would he continue the sanctions imposed by Obama on Russia.

“Putin has no respect for President Obama. Big problem. Big problem," Trump said, waving his arms, making that now-familiar circle with his forefinger and thumb. “I believe I would get along very nicely with Putin, okay? And I mean where we have the strength. I don’t think you’d need the sanctions."

The young woman was a Russian citizen by the name of Maria Butina. She is at this moment sitting in a Washington D.C. lock-up, occasionally venturing forth to visit with FBI agents and federal prosecutors as a cooperating witness for Robert Mueller in his investigation of the connections between Donald Trump, his campaign, and the Russian government. Maria Butina, at last report, was still drawing breaths of District of Columbia air.

Donald Trump, it appears, still has some things to learn from his BFF, Vladimir Putin.