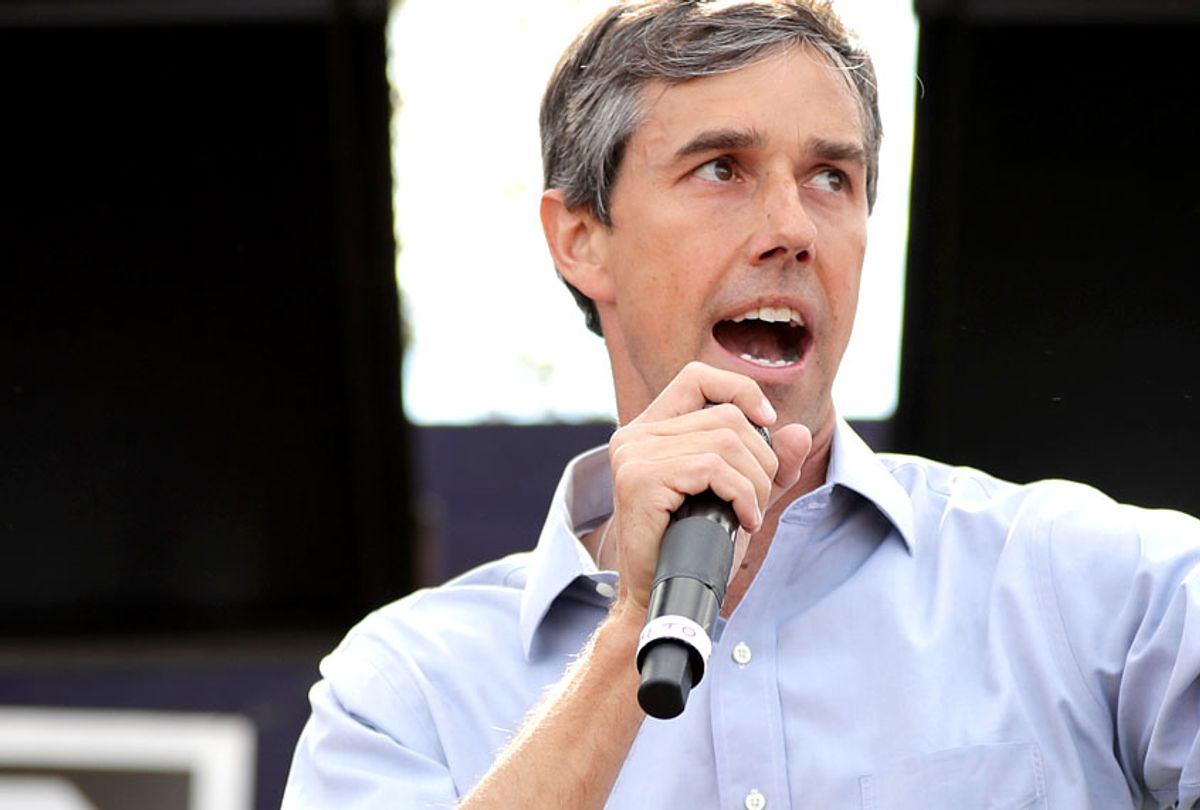 Beto O'Rourke is heading to Iowa this weekend amid speculation that the Texas Democrat is preparing to throw his hat into the ring for president in 2020.

O'Rourke and his team shot a video released Monday to rally support for Eric Giddens, a Democratic state Senate candidate running in a special election in Iowa on March 19. The former Texas congressman is expected to visit the Hawkeye State on Saturday to participate in a get-out-the-vote event.

"Our campaign and @BetoORourke look forward to getting out the #PantherVote and seeing you on Saturday," Giddens tweeted Monday evening.

O'Rourke's trip to Iowa will mark his first visit to the first-in-the-nation caucus state, and suggests the Texas Democrat is on the cusp of mounting a presidential bid.

"Supporting (Giddens) for state Senate is the way that we get Iowa, and by extension this country, back on the right track," O'Rourke says in the video, released Monday night. "It's the only way to ensure that you've done everything you possibly can for this country, when she needs you the most."

O'Rourke is not the only 2020 contender slated to drum up enthusiasm for Giddens, who is running against former GOP state Rep. Walt Rogers. Sens. Amy Klobuchar of Minnesota and Cory Booker of New Jersey are also expected to knock on doors for Giddens this weekend, the Washington Post reported. Other presidential hopefuls who cannot make it to Iowa this weekend, including Sens. Kamala Harris of California and Kirsten Gillibrand of New York, are reportedly sending their campaign staff to canvass for him.

But O'Rourke's outreach comes as the former Texas congressman is reportedly beginning to staff up in Iowa in preparation for a likely presidential run following months of media speculation.

Norm Sterzenbach, a veteran Iowa Democratic operative, helped produce O'Rourke's video for Giddens, CNN reported. Sterzenbach, who until recently was a contractor advising the Iowa Democratic Party on the caucuses, has reportedly joined O'Rourke's team and will advise the Texas Democrat in the early nominating state, according to Politico. Paul Tewes, who led Barack Obama's 2008 Iowa operation, and Margaret Jarosz, who was working for Sen. Sherrod Brown in Iowa before he decided not to run for president in 2020, are also assisting O'Rourke in Iowa, per Politico.

While in Iowa this weekend, O'Rourke is scheduled to speak on a conference call this weekend with the High School Democrats of America. The HSDA website says questions for O'Rourke must be "brief and unrelated to Beto as a potential 2020 candidate."

Late last month, O'Rourke said he had reached his decision about whether he would be jumping into the crowded 2020 Democratic presidential primary. In Austin, over the weekend for the South by Southwest festival, he told reporters, "I want to make sure I do it the right way, and I tell everyone at the same time. So I'll be doing that."

Should the former congressman decide to enter the 2020 race, he would likely leapfrog most of the 2020 Democratic contenders, largely because of his wide name recognition among Democrats following the 2018 midterms and his extensive fundraising network. To lure O'Rourke to campaign for the White House, a group of Democratic political operatives have launched "Draft Beto," an ambitious grassroots movement that has a goal of raising $1 million for a future Oval Office bid and building a donor email list that could eventually be transferred to the former congressman — if he runs for president.

Although O'Rourke fell just 200,000 votes short in his bid to unseat Ted Cruz during the 2018 midterm election cycle, he has emerged as something of a national phenomenon along the way, drawing comparisons to former President Barack Obama for his speaking style and bipartisan message of hope and unity. The former Texas congressman raised a staggering $80 million in his campaign and closer-than-expected performance to Cruz in November. His post-election missives have fueled interest from Democratic donors and the highest levels of the Democratic Party — including from Obama himself — that the right candidate could turn the reddest states blue in the next election cycle.

But O'Rourke has been keeping a low public profile since the midterm elections, even as other Democrats announce their candidacies. The Texas Democrat's near-silence, in turn, had swirled speculation that his interest in a possible presidential bid had possibly dimmed. Despite the political momentum surrounding O'Rourke following his race against Cruz, a Des Moines Register/CNN/Medicom poll released Saturday found that enthusiasm for O'Rourke appears to have slipped in Iowa over the last few months.