Draft Beto: Meet the group urging O'Rourke to run for president in 2020 — without him 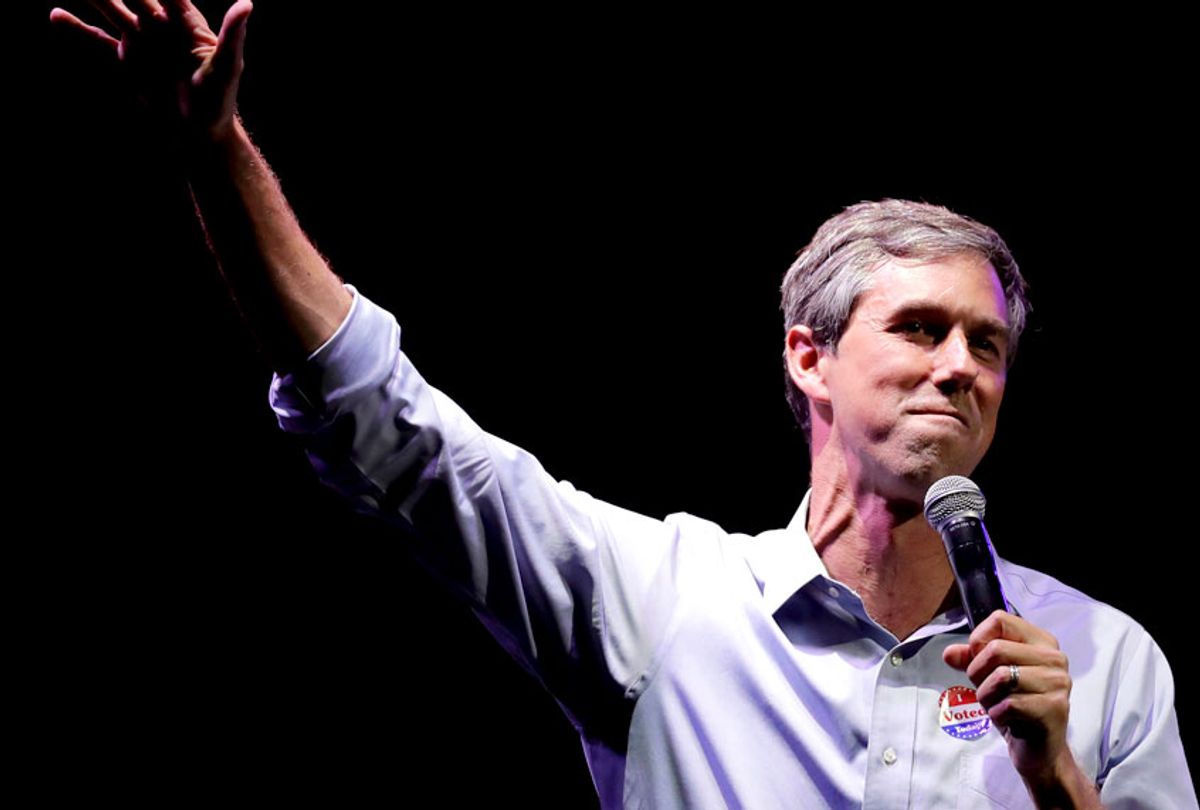 A group of Democratic political operatives are seizing on Rep. Beto O'Rourke's high political stock and fundraising prowess following the nationally-watched Senate race in Texas, in which he faced off against Republican Sen. Ted Cruz, during the 2018 midterm election cycle by laying the groundwork for a potential presidential run — without his support.

To lure O'Rourke to campaign for the White House, they have launched "Draft Beto," an ambitious grassroots movement that has a goal of raising $1 million for a future Oval Office bid and building a donor email list they can eventually transfer to the former congressman — if he throws his hat in the ring.

Nate Lerner, a co-founder of Draft Beto, told Salon the goal of the group, which is not affiliated with O'Rourke, is "not only to encourage Beto to run but also to build up the grassroots, the financial, the political infrastructure to help give him a head start when he does declare." It was also launched to show O'Rourke "the energy that's out there for him, how real it is and the strength of it," Lerner added.

O'Rourke raised a staggering $38 million in the third quarter of his Senate campaign — the most of any Senate candidate in history — and his closer-than-expected performance against Cruz last month, as well as his post-election missives, have fueled interest from Democratic donors and the highest levels of the party that the right candidate could turn the reddest states blue. Although O'Rourke said during his Senate campaign that he did not have Oval Office aspirations, he admitted at a town hall in El Paso last November that his position had changed from what he said on the campaign trail — he and his wife had "made a decision not to rule anything out."  By signaling that he is even open to throwing his hat in the ring for 2020, O'Rourke has continued to generate buzz and speculation in the already sprawling field of prospective Democratic candidates for 2020.

Excitement surrounding O'Rourke is clear when considering all Draft Beto staffers serve in an unpaid, volunteer capacity, Lerner said. The group so far has brought on seasoned staffers who have worked on political campaigns for top Democrats — including former President Barack Obama, 2016 Democratic presidential candidate Hillary Clinton, Sen. Dianne Feinstein (D-Calif.) and Rep. Katie Hill (D-Calif.) — to create the foundation for an O'Rourke presidential campaign in the early four nominating states of Iowa, New Hampshire, South Carolina and Nevada. Lerner highlighted Draft Beto's ability to attract those staffers to get involved and work as volunteers, unlike other presidential campaigns who are "courting staffers, offering high salaries and competing for them."

Draft Beto launched its first web video earlier this month to drum support for the Texas Democrat. The 90-second spot is set to The Who's "Baba O'Riley," which appears to be a reference to the viral video of O'Rourke air-drumming to the same song while waiting in a drive-thru line at a local Whataburger shortly after his debate with Cruz during the 2018 midterms.

"This may be the best song ever written," O'Rourke said of the Who's 1971 track in the 45-minute video live-streamed from his official Facebook page.

Draft Beto's video includes a montage of photos and video footage of several advisers of President Trump, including his former personal attorney and "fixer" Michael Cohen and former campaign chairman Paul Manafort. Cohen has been sentenced to three years in prison for his admitted role in buying the silence of women who alleged affairs with the Donald Trump during the 2016 presidential election, while Manafort has been accused by special counsel Robert Mueller of lying to investigators in breach of his plea agreement.

The video later pivots to a picture of Trump shaking hands with Russian President Vladimir Putin during the Helsinki summit last year. After that meeting with Putin, O’Rourke suggested he would consider supporting impeaching Trump. It also includes several clips of O'Rourke appearing on late-night shows and scenes from his 2018 Senate campaign, where he narrowly lost to Republican Sen. Ted Cruz in bright-red Texas.

"We're going to shine through right now in this moment of division," O'Rourke says in one clip. The video concludes with a quote from his concession speech last November: "We will see you out there down the road."

Although O'Rourke has not yet revealed if he plans to run for president, the the former Texas congressman is leaning toward it, Politico reports, citing people who have talked with the former congressman or his advisers. Should O'Rourke throw his hat in the ring, Draft Beto's efforts, especially connections to political operatives made in the crucial early primary states, could prove significant.

Similar draft groups have also been established in the run-up to past presidential campaigns, most notably the group "Ready for Hillary," which was created ahead of Hillary Clinton's 2016 presidential campaign. Adam Parkhomenko, a Democratic strategist and organizer who founded "Ready for Hillary" Super PAC in 2013, told Salon that outside groups like Draft Beto can fill the "holes" of an announced candidacy by raising money, organizing in local communities and making connections with strategists in key primary states. He also pointed out that while grassroots movements, such as Draft Beto, are often launched with the goal of helping a potential candidate, they are also "fill a void" for supporters who are looking for a way to express their support and enthusiasm for a potential candidate.

"When it comes to a presidential campaign or an outside organization, the person who is the best organized will move the needle and have a huge impact when it comes down to a crowded field and limited resources," Parkhomenko added.

Should O'Rourke decide to enter the 2020 race, he would likely face competition for the Democratic nomination from what is expected to be a very crowded Democratic field that already includes California Sen. Kamala Harris, Hawaii Rep. Tulsi Gabbard and former secretary of Housing and Urban Development Julián Castro, another Texan. In addition, Sens. Cory Booker (D-N.J.), Bernie Sanders (I-VT.) Kirsten Gillibrand (D-N.Y.) and Elizabeth Warren (D-Mass.) have noted their Oval Office ambitions — and these names are far from the complete list.

If he was advising O'Rourke, Parkhomenko said he would have told him to "get in as quickly as possible after the November election . . . because he could've rolled all that [momentum], kept it going and I think he probably would have kept a handful of people from running. I think he would have cleared [the Democratic field] a lot just because of how much momentum he had on his side."

Stil, Parkhomenko noted, "The momentum we see around him is unique, and it’s not something you see come out of nowhere, all of a sudden, like you've seen with him."

Victoria DeFrancesco Soto, a political scientist at the LBJ School of Public Affairs at The University of Texas, told Salon that O'Rourke's 2018 Senate campaign was "one of the most energized campaigns we have seen in Texas for a very long time."

"You really have to understand that the fact that he lost by three percentage points to Ted Cruz in Texas is actually a huge win, because the Republicans for so long had dominated in Texas and Ted Cruz has the infrastructure," DeFrancesco Soto said. "And while he didn't raise as much [money] as Beto this time around, he has really strong caucus and leadership support."

O'Rourke "made a huge mark in November," she added.

In addition to the electoral outcome, DeFrancesco Soto emphasized that O'Rourke "got Texan Democrats who have been deflated for a very long time and Republican independents who are weary of what's going on with the Republican Part, something to grab onto instead of just saying, 'Not Trump.'" O'Rourke, she added, gave those voters "something to believe in — rather than against."

The momentum around O'Rourke, she said, continues because "he showed that he was viable, in terms of electoral politics” and because he has promoted "positivity and optimism” — in Texas and beyond.