Forget labels like "capitalist" or "socialist." Warren is going after corporate power with policies, not words 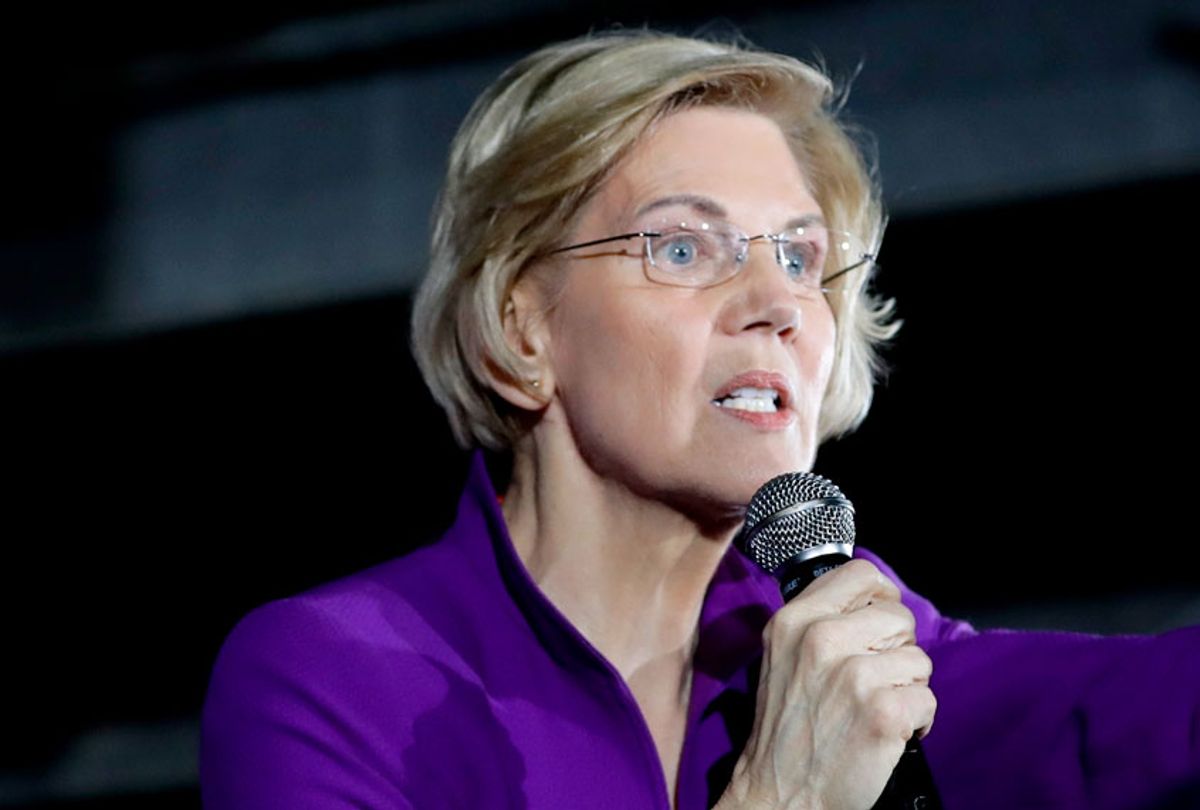 Sen. Elizabeth Warren's strategy for winning the 2020 Democratic presidential nomination is a risky one. She's been rolling out a series of big policy proposals, hoping that bold progressive ideas can capture voters' imaginations, but she's struggling to be heard in a news cycle dominated by Donald Trump's reality show antics and gotcha political point-scoring.

Warren's latest offering — a plan to use antitrust laws and principles to break up Big Tech — is provocative enough to garner a reaction. That reaction, by fitting into the gossip-and-drama model that drives views and readership, is helping draw attention to Warren's actual policy ideas.

The first incident came from Facebook refusing to run ads the Warren campaign had purchased that highlighted her antitrust agenda. The ads explicitly called out Facebook, naming Mark Zuckerberg's company, along with Amazon and Google, as one with "vast power over our economy and our democracy." When the ads were blacklisted, Warren tweeted that Facebook "has too much power" and the "ability to shut down a debate" over the limits to that power.

Facebook restored the ads, portraying the censorship (hilariously) not as an attempt to stifle criticism of their company, but an accident flowing from their ban on using the Facebook logo in advertising. Whatever the reasons, the move ended up drawing more attention to Warren's proposal -- and more discussion about the threat these monopolistic tech companies pose.

In what might be an even more obvious move, Politico responded to Warren's Big Tech break-up idea with an overt hit job.

"Warren took tech's money while ripping its biggest players," the headline blared, in a transparent attempt to troll the candidate as a hypocrite.

Even on its surface, however, the accusation makes no sense. Are voters supposed to be angry that Warren didn't sell out to her donors? Are they supposed to be outraged that she did what we hope politicians will do, which is to fight for the people's interests instead of for big donors?

But the attempted gotcha is even dumber than that: As Media Matters and Splinter pointed out, the donations did not come from tech companies themselves but their employees, who are presumably free citizens participating in a democracy and not serfs controlled by their feudal masters. As free citizens who have firsthand knowledge and strong opinions about their employers, some might even agree with Warren that their companies have too much power.

"If a guy pumping gas at a BP station in Flyspeck, Montana sends 200 bucks to your campaign, you are in the pocket of Big Oil," Charles Pierce of Esquire lamented. "It is the laziest form of campaign gotcha in which any publication can indulge."

This kind of gotcha trolling, which is aimed at sowing division on the left and turning self-identified progressives against Warren, has unfortunately worked in the past. Mainstream reporters get a kick out of getting Warren to eschew the "socialist" label and pointing out that she's not trying to overturn capitalism so much as making sure that "markets that have a cop on the beat and have real rules and everybody follows them."

Sadly, this focus on labels has been working better than Politico's half-baked gotcha. Some on the left have been seizing on this word game as somehow evidence that Warren isn't all she's cracked  up to be. This is nonsense, of course, since the people who get labeled as "socialist" — typically, Sen. Bernie Sanders and Rep. Alexandria Ocasio-Cortez, as well as their adamant followers — aren't any more socialist than Warren. (Which is why they call themselves "democratic socialists," after all.)

Sanders, for instance, has an admirable climate change plan to end federal subsidies on polluting industries and implement a carbon tax. That isn't a "socialist" solution — which might involve forcibly nationalizing the industries in question — but it would probably be more effective at fighting climate change. If a socialist state profits directly off oil and gas (as occurred in Venezuela during the Hugo Chávez years), that removes any incentive for regulations that might reduce income from fossil-fuel extraction.

In truth, there's no real daylight between the politicians called "socialist" and Elizabeth Warren. Both actually stand for the same mix of progressive taxation, aggressive regulation and a broad social safety net. Both are less interested in gutting or destroying capitalism than in saving the capitalist system from collapse. Where Warren distinguishes herself is in her laser-like focus on actually holding corporations responsible and using government power to equal the economic playing field between the rich and everyone else.

In this, she's contrasting herself with the rest of the Democratic field. While most candidates talk about corporate responsibility and income inequality, by and large the Democratic candidates are following the lead of Sanders in focusing more on increased social spending — such as Medicare for All and free or subsidized college — than on drastically expanding the regulatory powers of the federal government.

Warren, whatever label she chooses to wear, is running a campaign focused on attacking capitalist power directly. To be clear, she also supports big social spending programs that help people directly, such as her plan for universal child care or her support for Medicare for All. But no other candidate has even come close to her in terms of rolling out innovative ideas, like her "wealth tax" or her plan to break up Big Tech, that focus on the power of the wealthy and big corporations.

This focus makes sense for Warren, both personally and politically. Her career before she ran for office was in analyzing economic systems and showing how to reshape them so ordinary people aren't left out. She basically conceived the idea of the Consumer Financial Protection Bureau, after identifying how predatory banks were preventing working people from achieving financial security. Kicking exploitative capitalist butt is her forte.

It's an open question of whether this will be enough to distinguish Warren from the pack of Democrats running for the 2020 nomination. Unlike with free college or Medicare for All, you can't explain in two sentences why antitrust laws or a wealth tax will help lift ordinary people up, and most people won't pay attention to lengthy explanations of the mechanics.

Still, Warren has a gift for straightforward explanations that play well off the inchoate but real and widespread sense that the billionaire class is getting rich by screwing over the little guy, as evidenced by this tweet from MSNBC host Ari Melber.

"Warren is doing something none of the rest of them are doing," Michael Tomasky wrote in the Daily Beast. "She’s running for president. The others are just positioning."

It'll be many months until we can tell whether that works. But if Warren keeps making the right enemies, who own themselves by lashing out at her, there's a decent chance it might.