"SNL" star Aidy Bryant glows in "Shrill," a comedy about refusing to diminish your light 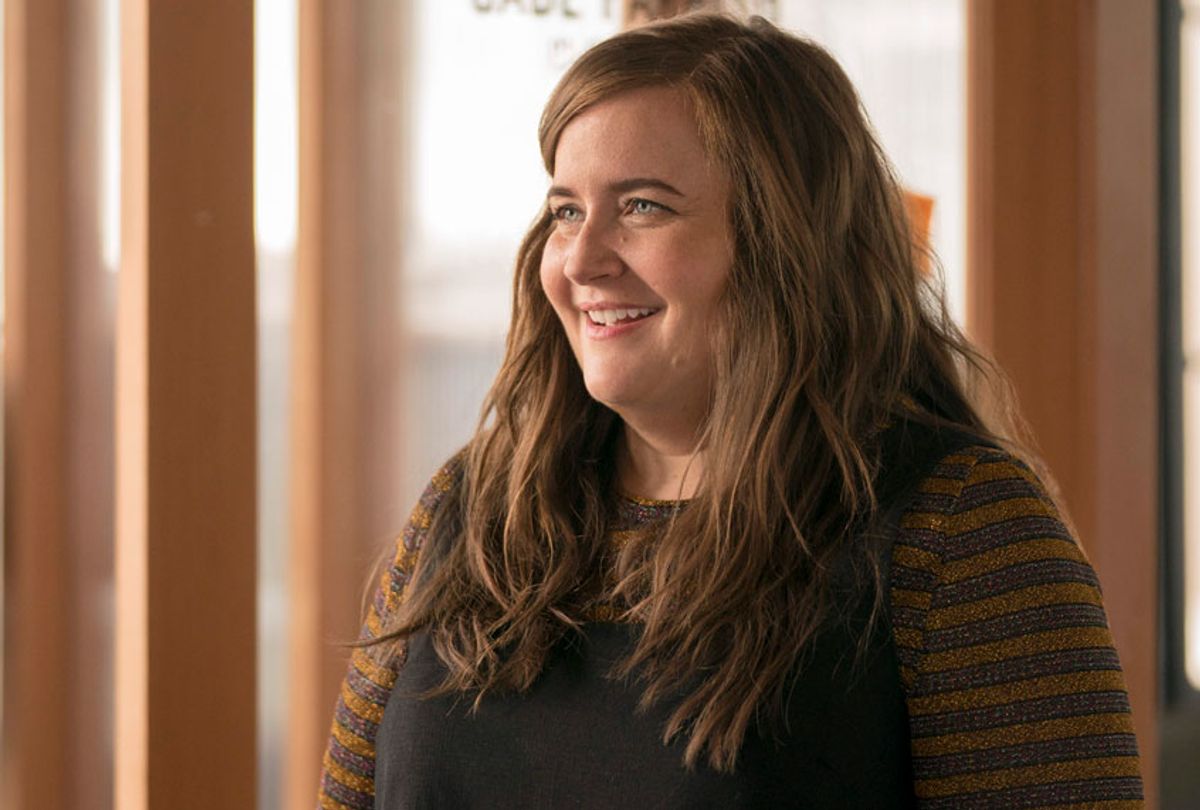 Just under two minutes into the opening episode of Hulu’s “Shrill” its heroine Annie ("Saturday Night Live" star Aidy Bryant) is accosted by a variety of insults fat people are made to endure simply for being outside of their homes. Annie is minding her own business at her local coffee shop, finding humor in a flyer featuring a photo-shopped image of fitness instructor named Tanya delivering a roundhouse kick to a slice of pizza and a donut.

What Annie doesn’t notice is that Toned Tanya is in the shop with her. Oh, but Tanya notices Annie. And Tanya is under the impression that since Annie is looking at her training ad, she’s a potential customer — a woman who is unhappy with her body.

Without asking Annie’s permission to touch her, Tanya grabs one of Annie’s wrists and declares she actually has a really small frame, one not meant to carry “all that extra weight.” Then comes the line people like Annie get to hear at least ten thousand times over the course of their lives: “There is a small person inside of you just dying to get out.”

A few unsolicited comments about Annie’s weight and presumed unhealthiness later, wrapped up in a positive smile and yoga pants — “You could be so pretty,” Tanya offers as she exits — bystanders lend their version of support. But that's not entirely welcome, either. “You’re funny!” one woman says. “You’re like Rosie O’Donnell.”

To be plus-sized in the world is to have the insecurities and assumptions of others foisted upon you. Some may point out that’s true for people in general, especially women, but women who dare to wear a double-digit dress size are reminded of this constantly. And Annie, an aspiring writer struggling to win respect and bylines at the alternative publication where she works, The Weekly Thorn, is the product of years of judgment and attempts at diminishment, both passively well-meaning and nakedly aggressive.

To wit: that nice lady attempting to cheer Annie by likening her to a comedian? She chose one who is now playing grandmother roles. Annie is in her twenties. And let’s not forget, Annie didn’t ask for anyone input. She showed up for an espresso drink.

I’ll preface what I’m about to say by recognizing that it’s a cliché, but it’s also true: I sincerely wish “Shrill,” which debuts Friday on Hulu, had existed 20 years ago when a younger me so desperately needed to see Annie. That is, a fat girl who isn’t a fool or a vamp or the butt of the joke. Annie has a kindly if lacerating sense of humor, even when she’s vulnerable; she’s flawed and makes the kinds of terrible decisions younger women make. And that has less to do with her weight and size than it does with her sense of worth.

A main reason that “Shrill” feels as novel as it does it because it is a comedy about the body that never finds laughter at its expense. Weight and size aren’t the central issues in Annie’s life; she’s perfectly happy with the body she’s in. It’s the people around her, like her snide, dismissive boss Gabe (John Cameron Mitchell) or her anxiety-ridden mother ("SNL" alum Julia Sweeney) who get bent out of joint about it.

Instead the inciting event that changes Annie's outlook revolves around a different sort of agency with regard to her body. This has a cascading effect, awakening her to take a hard look at the choices she’s making, like accepting miserable treatment from her idiot bang buddy Ryan (the excellent Luka Jones).

That, and maybe at last listening to the one person with whom she can be honest, her roommate and best friend Fran (Lolly Adefope, who makes the show), who constantly reminds Annie of her worthiness and lives in an unwavering state of confidence, as if to provide an example of a finer living.

Annie, as we meet her, is not a double for the woman she’s based on — Lindy West, author of “Shrill: Notes from a Loud Woman.” But that’s the point. West herself wasn’t a brash, take-no-prisoners feminist champion from the jump. Body-shaming and misogyny pushed her into that arena until she had no choice but to push. Nowadays she’s the one who takes the swings via her the hard, hilarious truths delivered in cutting prose.

Knowing this, there are some who will watch “Shrill” wonder if the title is misleading. Annie doesn’t truly come close to resembling the loud woman West cheekily describes herself to be until well into season one, long after we’ve gotten used to her smiling kindly and apologizing reflexively for having an honest emotional reaction to rudeness or even just walking down the street.

Appropriately, one significant turn occurs at a pool party for plus-size women, a visually stunning paradise of women in reveling in the glory of their own skin. This scene is the highlight of the first season. Here is where Annie, the timid reporter, is pulled into an undertow of joy,  dancing with strangers who embrace her. Then  she strips off her street clothes and dives into the pool, shattering a fear she's held since childhood. In that moment she stops caring about what others think and starts minding her own happiness. This brings out the fight in her, along with a surge of joy in the viewer.

“Shrill” is executive produced by Bryant, West, Elizabeth Banks and Lorne Michaels, so it’s no shocker that Bryant’s glow gets central position here. This is more than warranted. Even at the times when Annie visibly pushes herself to not be cowed by the thoughtlessness or mean-spirited behavior of the people around her, or just the ones who cross her path, Bryant doesn’t switch off the light inside her character.

This makes the moments when Annie submits to terrible treatment from people who don’t appreciate her even more painful. Our vicarious experience of that pain is the point.

Adefope is an outstanding foil for Annie in this regard because she’s also a woman of size, but one too invested in her own pleasure and not at all interested in what anybody thinks of her and her attitude. At the same time, showrunner Ali Rushfield, who co-wrote the pilot with West and Bryant, shapes Fran as a figure of singular power apart from Annie, existing not as a sidekick but a partner who can’t fathom why her best friend would care more about what other people think than she does about her self-worth.

Mitchell, meanwhile, is fabulously over-the-top as Annie's egotistical boss, a gay man who evaluates worth based on his own perspective and concept of what is cool and expects others to adjust accordingly.  He's a worthy foe for Annie at the top of the season because she's desperate for his approval and, along with it, more bylines. Watching his hold over her weaken provides one of the season's better sustaining tensions.

The blessing of “Shrill” is that Annie has a long journey from the starting line to the place where she believes in herself enough that she refuses to allow the world to shrink her. Season 1 only covers enough time to break through the membrane of self-doubt holding her back.

That may not be enough for viewers expecting a grand late bloom at the end of these six episodes; its too-short season closes in a place that lets viewers know Annie has just barely sprouted. And this creates the competing sensations of disappointment at Annie’s upswing at a significant turning point, one more suitable for a midseason reversal, and the delighted pang of wanting to see her living out loud, at long last.