Also, Marcia Clark writes a different ending with "The Fix" and "The Perfectionists" murders rich co-eds 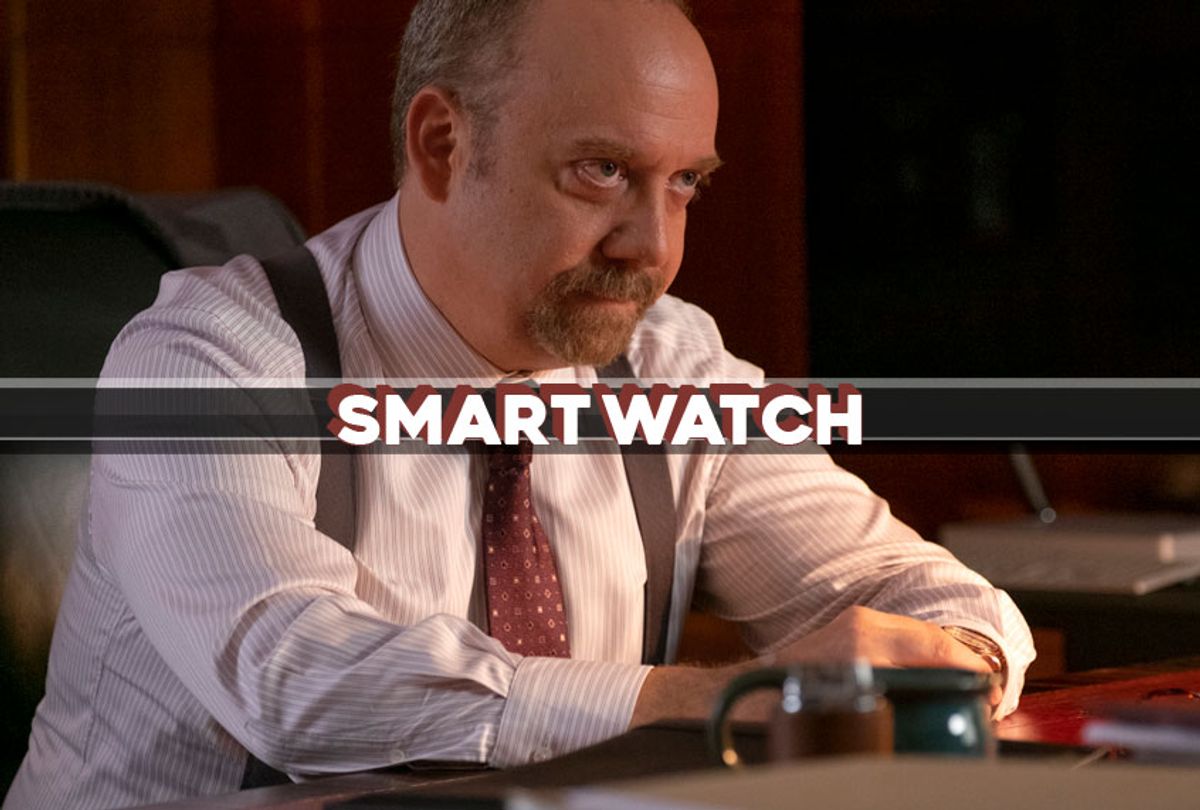 Last week, Francesco “Franky Boy” Cali, reputed boss of New York’s Gambino crime family, was shot to death in front of his Staten Island home. News outlets treated his killing as a reminder that the Mafia still exists, although in a greatly diminished form. The Chicago Sun-Times’ headline characterizes the slaying as “a throwback to [a] bygone era.” It’s not wrong.

“Billions,” in fact, nods to a watershed moment in the history of la cosa nostra when, near the end of the fourth season premiere, Chuck Rhoades (Paul Giamatti) realizes while drunkenly chumming it up with a power broker that they’re standing at the site of the 20th century’s final theatrical hit.

Steps beyond the door of Sparks Steak House, then-Gambino boss "Big Paul" Castellano and driver Tommy Bilotti were shot down in 1985 as Castellano got out of his car — a violent power move by notorious mob boss John Gotti.

Rhoades, still smarting from being unceremoniously ousted from his job as U.S. Attorney thanks to an operatic betrayal, can suddenly relate.

“I kinda feel bad for the old guy, scumbag that he was,” Rhoades sighs. “Blindsided like that. But I guess that’s New York for you, right? Boss one minute, in the gutter the next. Best you can hope for is one last look at the stars before you go.”

There’s plenty of honesty in that moment, which takes place at the end of a long day of hustling that Rhoades used to delegate to subordinates. With his seat gone, he has to scrape his way up from that gutter. At least he has a map — and, even more dangerously, a plan to not merely stargaze but return to his place in the political firmament, where he can better see his enemies and rain down holy hellfire upon them.

The intent here, it would seem, is to underline what series creators Brian Koppelman, David Levien and Andrew Ross Sorkin have been building toward over the previous three seasons. The mob may be a shadow of its former self, but organized crime is alive and thriving in the upper echelons of Wall Street and politics.  It was inevitable that the top representatives of each faction, Rhoades and Bobby “Axe” Axelrod (Damian Lewis), would team up at some point.

Over the three previous seasons the two have snarled at each other’s throats, bleeding each other whenever and however they can. Axe makes Rhoades compromise his principles, nearly costing him his marriage; his wife Wendy (Maggie Siff) shifts her loyalty of to her boss Axe but eventually finds her way back. And when both of her men are down, she brings them to the table not to broker peace, but to join forces and wage war.

“Billions” is the kind of series that’s so brashly intelligent and intentionally constructed that the discerning viewer might balk at admitting how much they like it. Or, to come clean, certainly I did prior to its second season. The series itself came into existence prior to Donald Trump’s ascendance to the presidency, and its piggish swagger felt like almost too much.

Now it is the perfect pleasure, encapsulating all that we loathe about the hyper-wealthy and the ruthless calculations they make to consolidate power while allowing us to appreciate the brazen, strutting might and certainty with which these titans operate.

In a style akin to that of the series’ central hero/villain, Axe, the writers of “Billions” have ensured that its tone evolves with the times even though this season’s starting point had to have been established for some time. Why else have the antagonists be linked, professionally and personally, via a character written to move freely and with trust through both their worlds?

And maybe that’s too unbelievable for some viewers to buy. Then again, given the concurrent betrayals by Axe’s protégé Taylor Mason (Asia Kate Dillon), who jumps ship to start their own firm and back-stabs their mentor to do it, and Rhoades’ former right hand Bryan Connerty (Toby Leonard Moore) and assistant United States Attorney Kate Sacker (Condola Rashād), who orchestrated their bosses’ humiliating sacking — why wouldn’t these two bitter enemies suddenly join forces?

“Billions” still bursts with crisply tailored dialogue cut to bite-sized portions for Lewis and Giamatti to savor, and David Costabile’s Wags is still one of the most enjoyable pricks on television. Season 4 also brings increased screen time for John Malkovich, playing a Russian oligarch who has more money and power than Axe and enjoys playing with his prey a little too much.

But none of this distracts from the titillating high each episode’s action delivers as Axe schemes to destroy Taylor, and Rhoades cunningly plots a path back to the inner circle of New York politics. And the best subplots in these new episodes depict the distinction between Axe’s mastery of hard power, Rhoades’ expertise with soft power (which requires way more worn shoe leather for him these days), and Taylor’s strategic smart power.

In this capacity Dillon’s performance is as fascinating as ever; somehow they flawlessly evoke the personality of a computer while coming across as utterly human. They also have an ally in Sara Hammon (Samantha Mathis), the shrewd commander to Taylor’s captain.

Cast chemistry, drool-inducing architecture and beautifully-shot scenes conspire to make this drama one of the sexiest meat grinders in all of television. The viewer is amply aware she’s watching a fictional celebration of greed and corruption at work, but damn if that fully-cooked sausage doesn’t make a dish fit to rival anything from Satriale’s.

Vengeance takes different forms once a slight ages by a few decades. Sometimes it is achieved organically, by way of the perpetrator’s evil turning upon her or, to paraphrase Sun Tzu, waiting by the river long enough to watch the bodies of your enemies float by, and then pointing and laughing like Nelson Muntz. Sometimes it comes on the wings of historical vindication.

And sometimes Disney lends a helping hand, as it does for Marcia Clark.

Think of it as a different version of “If I Did It,” except dramatized for the small screen. Robin Tunney stars as Clark’s fictional doppelganger Maya Travis, an L.A. district attorney whose career withers after A-list movie star Severen “Sevvy” Johnson (Adewale Akinnuoye-Agbaje ), whom she prosecutes for double murder, goes free. Eight years of horseback riding in rural Washington go by when, wouldn’t you know it,  Sevvy’s back under suspicion for another murder, and the Los Angeles D.A. brings her back in for a second chance.

This show is as goofy as it sounds and twice as contrived  — Sevvy even has his own Kato Kaelin! — but if you’ve been missing Akinnuoye-Agbaje (“Lost”) and Tunney (“The Mentalist”), it’s also a fairly standard, paint-by-numbers ABC drama. The perfect viewer of “The Fix” lives in the Venn diagram overlap between fans of ABC’s brand of entertainment pudding, and People Who Really Wanted O.J. to Go to Jail For Murder Instead of That Stupid Las Vegas Robbery.

For them, Clark’s scripted revenge fantasy is just campy enough to hit the spot. And maybe for her, it’s a way to write an ending she feels to be just.

You know life is getting weird when a former “Desperate Housewife” and a former “Full House” wife are arrested for participating in a massive bribery and fraud scam in order to secure admission slots at elite universities for their not-so-bright children.

At least the kids in “The Perfectionists” are too smart for their own good, and possibly for grown-up mean girls Alison (Sasha Pieterse) and Mona (Janel Parrish) to keep them in check. “Pretty Little Liars,” if you haven’t engaged in the pleasure, is one of those shamefully addictive teen soaps that adults used to watch somewhat shamefully at first, then shamelessly once it caught on.

So if you loved hating its main antagonists Alison and nutty Mona, you’ll be delighted and bewildered to know that they have somehow become faculty members at a college in the small town of Beacon Heights. There,  a group of three overachieving college friends suddenly find themselves connected to a gruesome murder, Agatha Christie-style, which pulls Alison and Mona back into familiar territory. Only this time they’re not behind the core deceptions. We don’t think.

This “Pretty Little Liars” spinoff, drawn from a book series by Sara Shepard, makes a person yearn for the days when TV rich kids entertained themselves by taunting their peers with an elaborate system of texting and pranks and creepy dolls and what have you.

Today’s wealthy TV youngsters have a lot of academic pressures to deal with, to say nothing of the reality that they could engage in bullying one day and the next, find themselves skewered on a fence. At least while they’re alive they bless us with good fashion and some grade-A pouting, enough to grant this show a hall pass for at least a few episodes to see where the mystery and homicidal shenanigans lead.