Kentucky teachers’ actions is a sign of how teacher protests are evolving. 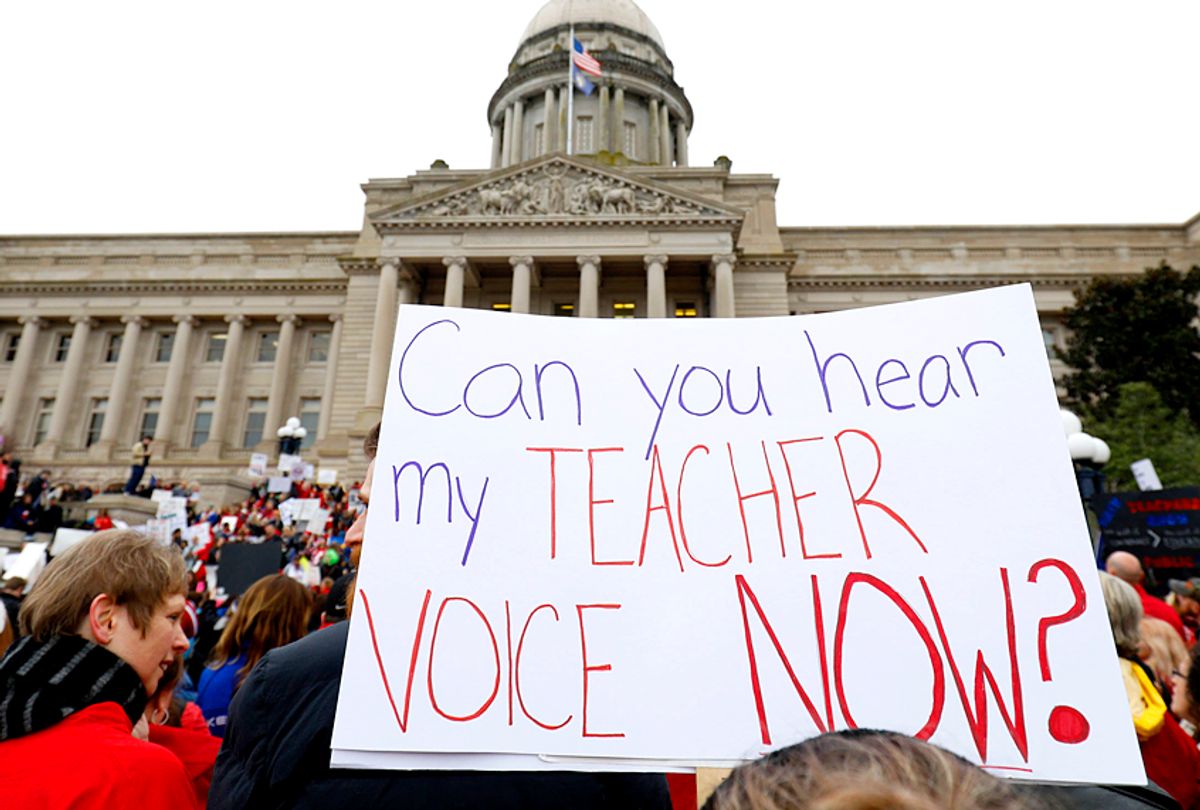 Public school teachers and their supporters protest against a pension reform bill at the Kentucky State Capitol. (Getty/Bill Pugliano)
--

Don’t call what Kentucky teachers just did a “wildcat” labor action, at least not when you’re speaking with Tim Hall. Hall, a classroom teacher at Shawnee High School in Louisville, answered my phone call as he was driving to the state capitol in Frankfort to protest the latest slate of education-related bills being considered in the legislature. He and hundreds of other teachers in Jefferson County Public Schools, the state’s largest school district that includes Louisville, called in sick, prompting the district to close schools for over 100,000 students.

Hundreds of those teachers joined Hall at the state capitol. It was the third time in a week and the second day in a row that enough JCPS teachers called out sick to trigger a full district shutdown. The sick-out spread to four other districts that also had to close. But neither the state teachers’ union nor the local union for Jefferson County had anything to do with organizing the action. In fact, union leaders urged teachers to show up for work, preferring instead to have districts send small teams of teachers to lobby state lawmakers.

Yet Hall bristled at using “wildcat” to describe what JCPS teachers were doing. “I don’t like that word,” he said. “I think our concerns are reflective of teachers not only in JCPS but also across the state.”

The Kentucky teachers’ actions are the latest in what has become a wave of teachers using their collective power to influence legislation in state governments, but the sick-out in Kentucky is also a sign of how teacher protests are evolving.

Teachers who once saw labor actions as effective tactical responses to attacks on their financial well-being are now understanding that their labor power is part of a broader strategy to even the playing field in a political landscape that is increasingly unequal. And there’s strong evidence they’re having an impact.

The teachers, joined by parents and other public education activists, organized the sick-out action on social media sites including the Facebook page for JCPS Leads, which Hall helps facilitate. Teachers went back to work at one point, but then extended their protest to a fourth, fifth, and then a sixth day to ensure controversial bills were killed in the legislature.

The roots of this year’s labor action are in last year’s statewide strike when teachers closed schools across the Bluegrass State to protest a new pension bill that would have put retirement earnings for new teachers at greater risk and shortchanged retirees and senior teachers. This year’s sick-out is different.

First, teachers have a much broader array of targets for their protests. “We want a whole package of bills voted down,” Hall explained.

Once again, a threat to teachers’ pensions, House Bill 525, has stirred the teachers’ ire because it would reduce the participation of educators on the state employee pension board. But two other bills go beyond wage-and-benefits grievances: House Bill 205 that would establish a statewide school voucher program giving tax breaks to those who donate to private school scholarships for special-needs and low-income students, and Senate Bill 250 that would take school principal hiring decisions away from local, site-based committees, which include teachers, and give the district superintendent sole responsibility for the hiring process—the bill applies to JCPS only.

Hall sees all three bills as attacks on democracy. “They’re about taking away our ability to collaborate on how our schools operate,” he said. By removing educators from the pension board, ramping up a statewide voucher program, and undermining teachers’ influence on principal hiring, teachers are being pushed further out to the periphery of decision making, he explained, and in turn, are less able to make their voices heard as advocates for their schools and their students.

Also, there’s a good reason why Jefferson County teachers are taking it upon themselves to lead the labor action and go it alone in speaking out for their colleagues elsewhere in the state. Not only is JCPS the only district affected by the bill to change principal hiring; JCPS is also the only district currently under threat of state takeover. Proponents of charter schools and vouchers are generally seen as the most ardent backers of the takeover effort. And Hall and other teachers see all three bills as efforts to further undermine their participation in governance of their schools and usher in more state control and privatization of schools.

A Movement About Democracy

In taking their demands beyond economic grievances to include issues of governance and local community voice, the Kentucky teachers are joining a strong new trend in the teacher movement.

When West Virginia teachers walked off the job last year and started what’s become known as RedForEd, they generally made wages and benefits the core of their grievances. But in their labor action this year, West Virginia teachers expanded their protests to include issues with privatization, specifically, to fight new legislation that would take public money from traditional districts and use it for charter schools and for private and religious school tuition.

Also this year, teachers in Los Angeles and Oakland, California, made opposition to the unchecked growth of charter schools and their lack of transparency and accountability a centerpiece of the unions’ demands.

Education journalists and “experts” have noticed this trend and described it as mostly a battle over funding for public schools vs. charter schools, voucher programs, and other forms of privatization. But that misses the broader argument teachers make that all education mandates that stem from top-down authority and big money interests are meant to rob teachers of having a voice in how schools are governed.

Teachers are making RedForEd a fight not just for funding but also for political power.

There’s evidence that the teachers’ change in strategy will work.

Last year’s RedForEd protests clearly affected state legislation where the protests occurred. According to a new analysis, in four states where teachers walked off the job, state legislatures responded by increasing baseline state funding for schools by 3-19 percent.

This year, teacher strikes in Los Angeles and Oakland led to calls from local governments for moratoriums on new charters and increased regulation of the industry. In response, California state lawmakers acted with “lightning speed” to enact new laws that require more transparency in charter school operations.

How successful were the Kentucky teachers? As of this writing, on the final day of the legislative session, two of the three bills teachers targeted in their protests appear to be dead—the bill restructuring the state pension board and the bill creating a statewide school voucher program. The bill targeting the principal hiring process in JCPS appears to have passed in both chambers and will likely be signed by Governor Matt Bevin.

Two out of three is not a bad batting average in a “red state” where Republicans hold a trifecta of strong majorities in both branches of the state legislature and the governor’s seat. And should the dead bills come back to life, Hall assures me, or similar bills spring up, teachers will return to the capitol.

“We’re tired of being unsupported and messed with,” he said. “Teachers want to have fair ways for us to ensure the public education system continues to provide access to well-supported schools for all kids.”