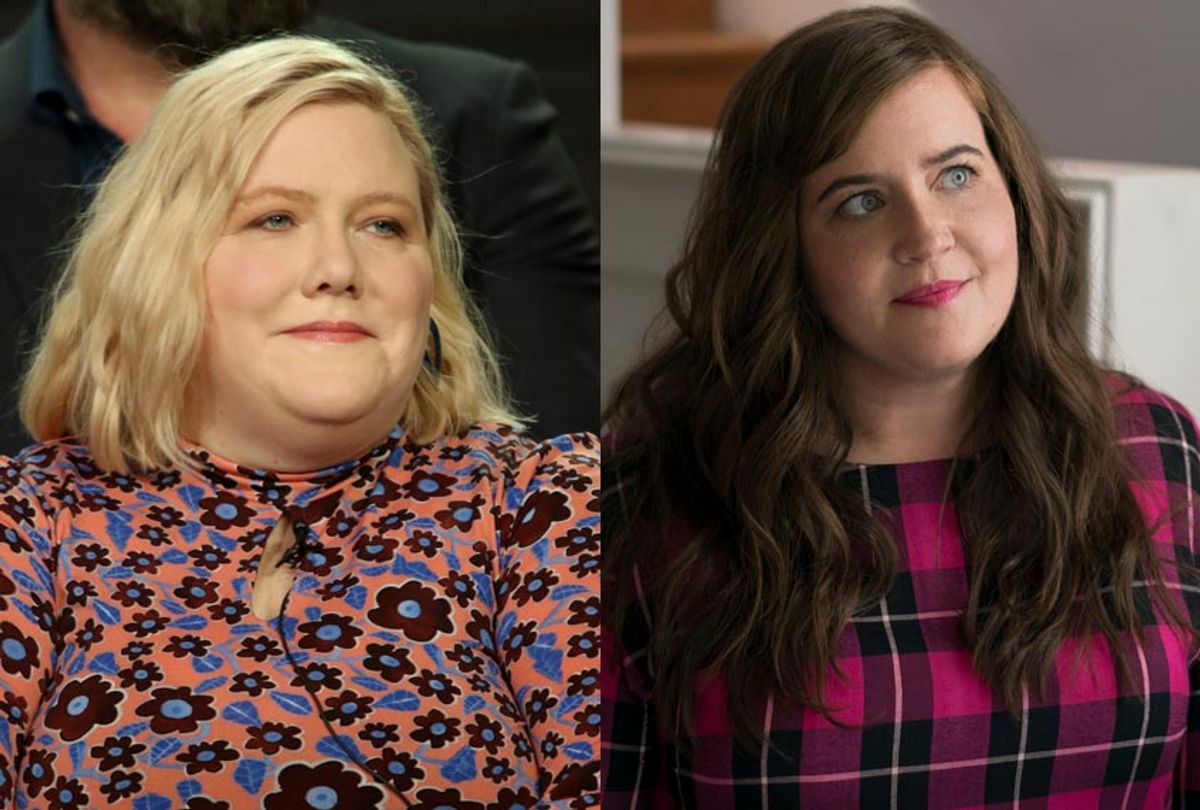 “Shrill” may be the only comedy to feature its main character getting an abortion in its first episode. The episode doesn’t revolve around the procedure, and the comedy’s heroine Annie, played by “Saturday Night Live” star Aidy Bryant, doesn’t express any trepidation over the procedure or fear any consequences.

Rather, it’s an action she has to take to course-correct her life. Ryan (Luka Jones), the casual sex partner who got her pregnant, makes her leave his place by the back exit, forcing her to climb over his backyard fence and fall into a patch of weeds in the alleyway on her way out.  That man is not father material. He’s not even boyfriend material . . . but that's another story.  The point here is that Annie has a life to build, and having this loser's baby isn't part of that plan.

To Lindy West, whose 2016 autobiography “Shrill: Notes from a Loud Woman” provides the inspiration for Hulu’s comedy, depicting Annie’s abortion as a positive, paradigm-shifting action was an absolute necessity.

And West decided to call upon her own life experience to inform the lead up to procedure. “I was like, ‘Oh, I'm certainly not having a child with this person. I'm going to go get this abortion and I'm going to move on with my life.' It was an active decision that I made to make my life better,” she told me in a recent interview.  “And I'm not a passenger in my life, I'm the driver."

West is a co-founder of Shout Your Abortion, a movement dedicated to removing the implied secrecy, fear and shame surrounding a procedure that is normal and safe. (Read her essay on why she tells the story of her abortion.) Naturally, then, “I really wanted to put that right up front and say ‘This is what kind of show this is going to be. We're not afraid of this because no one should be afraid of it,’” she said. “It's a normal part of life that's been happening forever, especially right now.”

This writing decision is meaningful on other levels too. Generally when a character terminates a pregnancy on television it occurs several episodes into a series — seasons into its run, typically. The famous two-part abortion installments of “Maude” were the ninth and 10 episodes of first season. Meanwhile on “Grey’s Anatomy,” Cristina Yang had an abortion on primetime television, but it took eight seasons for that to happen. (She scheduled a procedure much earlier on in the series, but the writers skirted any possible controversy by way of a miscarriage — something of a classic move in TV.)

By the time a series writes abortion into a character’s storyline, we’re already on her side. Even then, it’s often depicted as a drastic measure — Maude’s stated reason is that she finally had a choice, but the ongoing subtext was also that she was too old. Cristina, like Annie, chooses to have one because she doesn’t want a child. The difference is that viewers are just bring introduced to Annie when she has the procedure.

That said, as showrunner Alexandra Rushfield pointed out, “we sort of figured that like in the history of fat women on TV and movies, you can kind of get what [Annie’s] backstory is. So let's get to the part where she's sick of being treated like that. It gets more interesting from there, actually.”

Annie’s abortion is one tick on a list of items that makes “Shrill” a revolutionary series destined to foment conversation — and appreciation, lots of that — among viewers. For one thing, Annie is not the typical fat female character on TV,  as in comically vampy, an irrepressibly giggly simpleton, or sad. She's not a cartoon character, in other words. Bryant portrays her as smart and witty, and a work in progress. As such, each of the six-episodes of "Shrill" is filled with moments anyone who has ever felt stepped upon can relate to.

Annie has a demeaning boss (John Cameron Mitchell) who doesn’t value her talent, a sex partner (Luka Jones) who treats her like a disposable object, and a mother (Julia Sweeney) who reflects her anxieties onto those she loves.

Annie’s also fat, which plays a part in how the world treats her but, as West explained, is less central to the show than Annie’s view of herself.

“That's kind of the crux of the show,” West said. “It’s, OK, maybe I can figure out how to love myself the way that I am, but I still am going to be smacked in the face by this every day, every time I encounter another person. Because other people notice your body and want to let you know about it all the time.

“Ever since I started writing about being fat, the whole thing has just been like basically trying to beg or force people to see me as a human being, and let me have my privacy and my autonomy and let me make my own choices and live my life and deal with all the challenges that everyone else has in life,” she continued.

But West also makes it clear that “Shrill” is much more than a show about size. “Obviously as a fat woman, you face specific challenges. But that doesn't mean that all women are not placed on this hierarchy, where your value is dependent on what you look like. Even if you make it to the very, very top of that hierarchy, there are other ways that society punishes you.”

Many of the conflicts propelling the season forward arise from Annie’s battle to be taken seriously where she works, which happens to be an alternative publication called The Weekly Thorn, patterned after West’s job at Seattle’s weekly The Stranger. “Not being taken seriously in the workplace, being interrupted, being talked down to — that, coupled with the way we infantilize fat people — we assume that fat people are stupid, that fat people are not in control — all of those things together really make Annie’s office life challenging,” she said.

Steadily, organically, the word is getting out about “Shrill.” But it’s odd to notice that, for example, there’s no official network Twitter account for it, as there is for “Castle Rock” or “The Handmaid’s Tale.” One would think that this would be a show around with a network would strive to build a community. Because it is certainly there, and it’s not just women who are moving to shout about it.

Rushfield must have had a sense this would be the case. She admitted that during the process of pitching the show, “I just thought about things in my own life, actually, and since then I feel like a weight has been lifted. Things about, like, relationships and stuff,” she said, explaining that the more she listened to Bryant and West talk about the show, “the more I was just like, ‘I'm really going to let the lack of that or trouble in that area was make my entire life seem like not valuable?' It shifted something huge in me.”

The central challenge, as West sees it, is for all of us to see the humanity in every person, and every body. “I guess in like a meta way, making this show is part of my process of doing that,” she said. “You know what I mean?” We do.