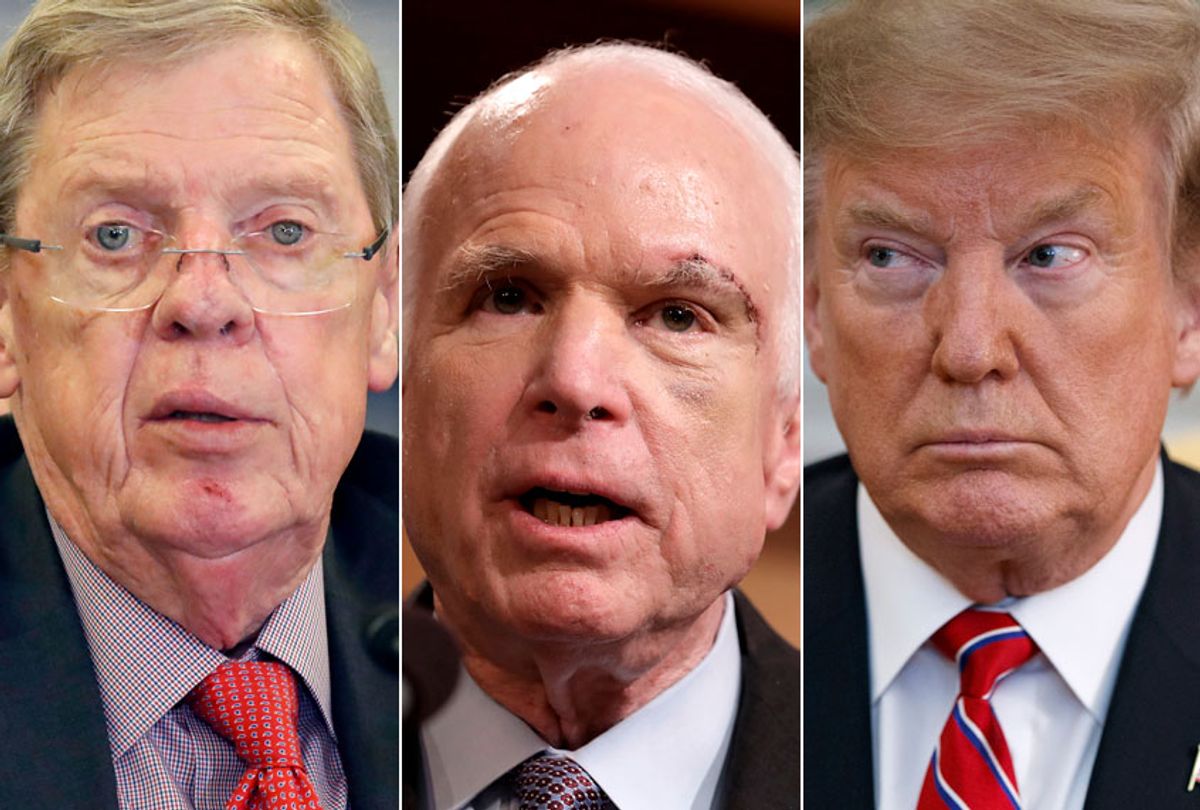 Even as President Donald Trump continues for a fourth day to berate the memory of late Republican Sen. John McCain, only one of the recently deceased war veteran's Republican former colleagues dared to directly criticize the president for his attacks.

Sen. Johnny Isakson of Georgia has emerged as one of the few prominent GOP politicians to unequivocally stand up for the late McCain against attacks from Trump. "I want to do what I said that day on the floor of the Senate," Isakson told The Bulwark in an article published on Wednesday.

"I just want to lay it on the line, that the country deserves better, the McCain family deserves better, I don’t care if he’s president of United States, owns all the real estate in New York, or is building the greatest immigration system in the world. Nothing is more important than the integrity of the country and those who fought and risked their lives for all of us."

Isakson was referring to a dayslong campaign by Trump against McCain, who died last year after a prolonged battle with cancer.

"Spreading the fake and totally discredited Dossier 'is unfortunately a very dark stain against John McCain.' Ken Starr, Former Independent Counsel. He had far worse 'stains' than this, including thumbs down on repeal and replace after years of campaigning to repeal and replace!" Trump wrote in a tweet on Saturday.

He added on Sunday, "So it was indeed (just proven in court papers) 'last in his class' (Annapolis) John McCain that sent the Fake Dossier to the FBI and Media hoping to have it printed BEFORE the Election. He & the Dems, working together, failed (as usual). Even the Fake News refused this garbage!"

On Tuesday the president doubled down on his anti-McCain rhetoric by telling reporters, "I was never a fan of John McCain, and I never will be."

It is worth noting that McCain wasn't aware of the Steele dossier until after the election, according to The Washington Post.

Mitt Romney, the only other Republican senator to criticize Trump by name for his attacks, did not ever serve with McCain in the Senate but did run against him in the 2008 GOP presidential primary.

Yet one of McCain's closest friends in the Senate, Republican Sen. Lindsey Graham of South Carolina, refused to follow suit:

He only added, "Nothing about his service will ever be changed or diminished."

"The View" co-host Joy Behar expressed dismay with Graham's defense, saying  on Tuesday that the South Carolina senator "needs to find his testicularity now and go for it."

I want to make sure all of you could see how kind and loving a stranger can be. I’m posting her note for her family and friends could see. pic.twitter.com/GoNCm0fv4U

Senate Majority Leader Mitch McConnell made no mention of Trump in his Wednesday tweet in support of the former Arizona Republican.

As conservative author Amanda Carpenter wrote, "Trump makes Republicans choose him or their principles. Makes Lindsay Graham choose him over his dear friend John McCain. Makes Kellyanne Conway choose him or her husband. The loyalty tests never, ever end. And the choice shouldn’t even be hard."

Meghan McCain, the late senator's daughter, said during the program that Trump "spends his weekend obsessing over great men because he knows it, I know it, and all of you know it, he will never be a great man."

On Tuesday McCain cast further shade against the president by tweeting, "As my father always used to say to me - Illegitimi non carborundum."

David Weissman, a former Trump supporter, tweeted that "one of the reasons why I left MAGA because lack of decency, and that's what the Republican party has lowered itself too. I think which is why I am calling Democrats to do better because I see the potential."