No civil war coming: Believe it or not, political tribalism in America is overstated

Yes, political division in the Trump era can seem dire. But Americans are not as bitterly divided as they seem 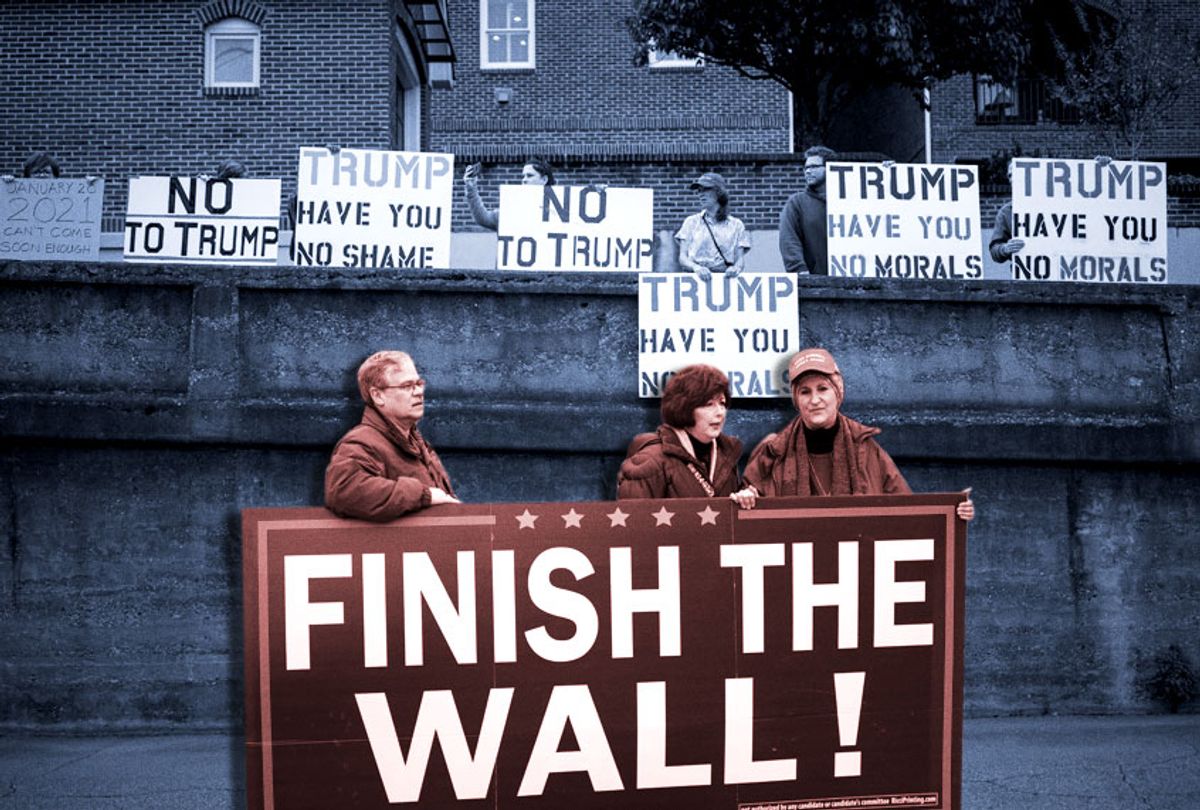 Are Americans separated into two irreconcilable partisan sides that instinctively love their fellow Democrats or Republicans but hate those in the other camp? This view, increasingly popular since the 2016 election, can leave the impression that partisans are unmovable by facts and logic, that they no longer want to associate with anyone on the other side, or that they would readily follow their leaders into battle against fellow citizens.

It is not a total myth. There is a real rise in negative partisanship: partisans rate the other party less favorably, reporting increasingly cold feelings. But when answering questions about the parties, citizens are thinking more about elites like Presidents Trump or Obama than about voters such as their own relatives. Negative partisanship is more closely tied to dislike of politicians than voter groups, though perceptions of voters in the other party are also negative. Many dislike both parties’ leaders and just find their own party more tolerable than the opposition.

When asked to explain what they dislike about the other party, voters mention its leaders a lot more than its voters. Even when voters do think of politics as a conflict between social groups, they usually discuss what groups are likely to benefit from each party’s policies (most commonly, Democrats saying Republicans are out to help the rich or hurt the middle class) rather than their disdain for the other half of the country.

The other dramatic indicator driving concern is the increasing number of partisans saying they would not approve of a child marrying someone from the other party. But one study found that many people disapprove of marriages to people described as either Democrats or Republicans because they expect partisans of either stripe to talk too much about politics. People also may express dislike of the other side as a form of team fandom — and in fact, Yankees and Red Sox fans also sometimes voice disapproval of their child marrying a fan of the wrong team.

Findings of partisan bias, however, should not be dismissed as inconsequential; Americans show strong implicit and explicit biases that may cause discrimination. Party favoritism has real economic consequences even though it’s generally driven by the desire to help co-partisans, not hurt the opposition. (A small segment of each party does condone violence against the other party or at least expresses schadenfreude about injury to the other side.)

Even among those who otherwise support one of the two sides, however, there is also a long-term trend toward identifying as an “independent,” reducing political involvement among the least committed and leaving politics to the most rabid partisans. Those remaining Democrats or Republicans are now socially and ideologically sorted into the parties: Citizens’ partisanship now more often matches their racial, religious and ideological identities. Partisanship drives some people to become more like their fellow partisans, even changing their religious identities. Only the shrinking pool of partisans who do not fit their party’s social profile are resisting polarization.

Yet we may be too quick to think of all this as a consequence of social group attitudes. Overall, attitudes toward groups such as ethnicities are mostly improving or stable over time; it is attitudes toward institutions like Congress that are deteriorating. Dislike of the other party is linked to ideological disagreement, especially for those playing close attention. Citizens emotionally respond to politicians’ ideologies and policy positions as well as their party. Partisanship is linked to economic and social policy preferences and where people place themselves on an ideological spectrum, even if most Americans lack consistent ideological views.

Partisan dislike is not explained by increasingly liberal or conservative policy positions (even if it is linked to ideological group identification). Geographic polarization between localities and neighborhoods, however, means we encounter more people of our political persuasion, sometimes even more in the offline world than in social media.

Many Americans are still largely apolitical, but even disinterested citizens now recognize party differences on policy, ideology and group coalitions and pick the side consistent with their views. In fact, nonpartisan and disengaged voters now appreciate differences between the presidential candidates as well as the most partisan and engaged voters did in the 1970s; this clarity about where the parties stand — and who they stand for — has reduced the number of voters who have mixed views about each party, of those who remain undecided between the candidates, and of those who flip between supporting Democrats and Republicans. Voters are responding to real trends in elite politics: The two parties’ politicians and activists have been moving apart for decades, clarifying their views for voters.

Scholars recognize that elite trends have driven much of the public partisan change. Recent books like "Prius or Pickup?" and "Enchanted America," however, impart images of American voters as divided into personality-driven sects. Indeed, liberal Democrats and conservative Republicans increasingly give different answers to questions on base instincts or temperaments like openness to new experience, “authoritarian” parenting attitudes, rationalism, beliefs in a just world and racial resentment. But it is actually quite difficult to sort out which of these views is a precursor to — rather than a consequence of — politics. Many voter views are dependent on cues from party elites and media.

Personality-based approaches also do not explain racial minority politics well. White liberals are distinct from white conservatives in their views and reactions, but minority attachments to the Democratic Party are not explained by the same factors. Since racial minorities usually constitute 40 percent of the Democratic electorate, that makes for quite a blind spot in the personality approach to understanding one of the two major parties. The Democratic Party is a coalition of different social groups that ally for different reasons (including religious and sexual minorities and public sector workers as well as racial minorities), so it seems odd to consider it one “tribe” (and, of course, public assumptions about what makes a group “tribal” are largely stereotypes that do not match either indigenous people’s practices or humans’ evolutionary history).

A review of the research on rising animosity among Democrats and Republicans finds a lot of important and well-studied trends: Negative views of the out-party are rising and they are increasingly manifesting in nonpolitical interactions. But the public presentation of this research (or its interpretation by journalists) seems to have oversold the notion of political tribalism. Evidence of ideological sorting and political disillusionment -- awareness of disagreement, lack of cross-cutting views shared with the other side, dislike of politicians, a general aversion to public conflict -- is too often interpreted as evidence that Americans are disparaging of fellow citizens in the other party.

Americans’ social-group attitudes, ideological and policy predispositions, and partisan feelings interact and are increasingly lining up. We know we disagree, and we want our side to win. But most Americans are still capable of cross-partisan friendship and communication, and many are turned off by politics as a whole. Expect more heated discussions, but no impending civil war.