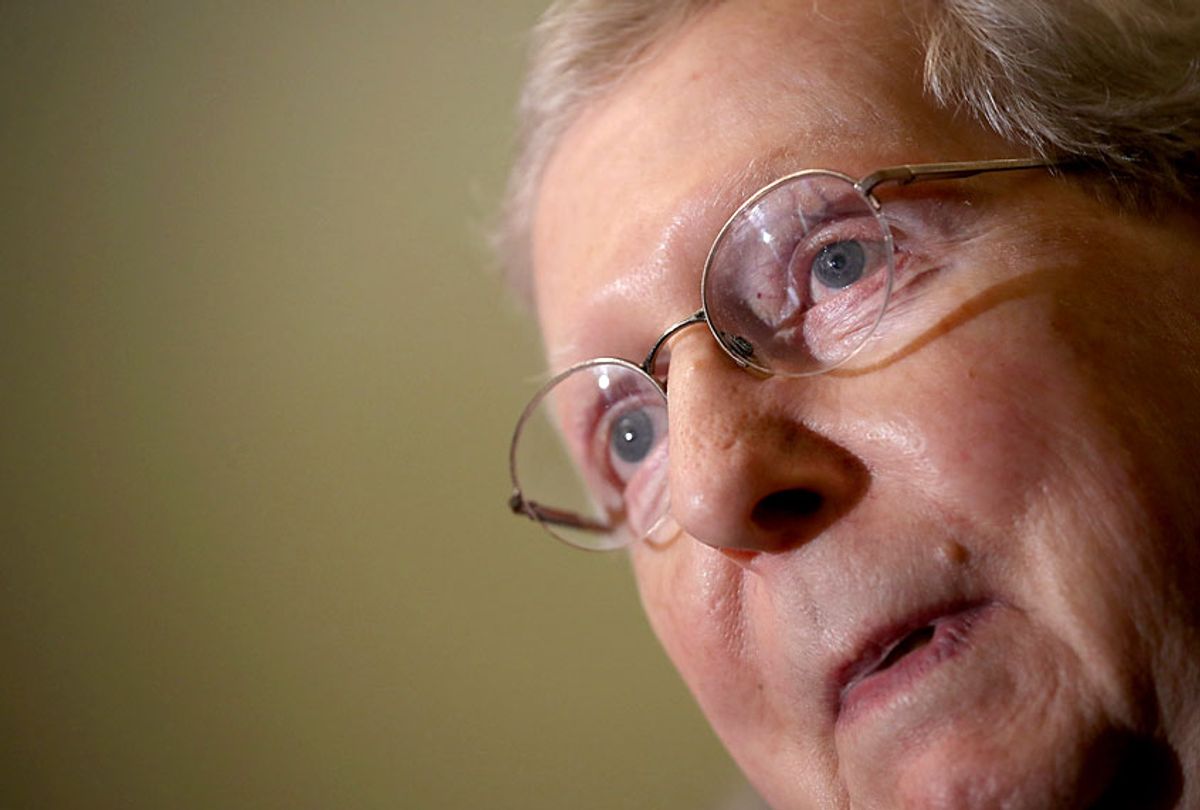 Senate Majority Leader Mitch McConnell, R-Ky., will force Democrats to vote Tuesday on the Green New Deal, a move seen by Democrats as a ploy aimed at using the ambitious — and provocative —  climate change resolution to drive a wedge between the party's rank-and-file members and its progressive wing ahead of the 2020 election.

McConnell has made it clear that he is pushing the vote to put Democrats, especially the many in the Senate who are running for president in 2020, on the record about the controversial plan introduced last month by Rep. Alexandria Ocasio-Cortez, D-N.Y., and Sen. Ed Markey, D-Mass., which Republicans contend would move the country toward socialism and destroy the economy.

"I could not be more glad that the American people will have the opportunity to learn precisely where each one of their senators stand on the 'Green New Deal': a radical, top-down, socialist makeover of the entire U.S. economy," McConnell tweeted Monday.

Democrats reportedly plan to dodge what they have dismissed as a "stunt vote" on the Green New Deal by voting "present" instead of voting either for or against the proposal, which requires 60 votes to advance. The Democrats, who support many of the ideas in the climate measure, believe "the Green New Deal at this stage is more of an aspirational document than finely crafted legislation ready for a vote," CNN reported.

The Green New Deal is a broad set of bold goals outlined in a non-binding resolution that seeks to move the country toward "net-zero greenhouse gas emissions" by 2050 and create "millions of good, high-wage jobs" in clean energy sectors. The wide-ranging package is a resolution – not detailed legislation – and does not identify specific ways to achieve the goals it lays out. Democrats thus argue that the vote scheduled for 4 p.m. ET will occur before the plan has been debated in Congress or on the national stage.

"Let's not do a sham vote that's meant to embarrass one person or another. This is too serious an issue for that," Senate Minority Leader Chuck Schumer, D-N.Y., said on the Senate floor Monday. "Republican owe the American people some real answers – not games."

Sen. Ed Markey, a lead sponsor of the Green New Deal, also dismissed Tuesday's vote as a "sham" that seeks to "make a mockery of the debate in the Senate on climate action" on Monday. He said the resolution was meant to spur national debate about how to tackle climate change and fuel a greener economy – not to divide the Democratic Party by forcing lawmakers to take sides in a quick vote.

"They are calling this vote without any hearings, without any expert testimony, without any true discussion about the cost of climate inaction and the massive potential for clean energy job creation," Markey said.

He added, "Senate Democrats intend to show unity on the issue of climate change. We will be turning the tables on Republicans who have no plan on climate change and have no intention of passing legislation to combat it."

Ocasio-Cortez blasted congressional Republicans on Saturday for seeking a "bluff" vote on her proposed legislation.

"The GOP's whole game of wasting votes in Congress to target others 'on the record', for leg they have no intent to pass, is a disgrace," Rep. Alexandria Ocasio-Cortez, D-N.Y., who introduced the resolution last month with Sen. Ed Markey, D-Mass., tweeted over the weekend. "Stop wasting the American peoples' time + learn to govern. Our jobs aren't for campaigning, & that's exactly what these bluff votes are for."

The Senate will also vote Tuesday on a $14 billion disaster aid bill for victims of hurricanes, tornadoes and drought during the last two years, which the House of Representatives passed in January. The outcome of the vote remains unclear.

Schumer blasted McConnell for scheduling a "sham" vote on the Green New Deal right before members of the upper chamber will vote on a funding package for disaster relief, arguing climate change and natural disasters are unquestionably related.

"Let there be no doubt: These disasters are magnified precisely because of climate change," Schumer said Monday on the Senate floor. "I can not fathom the level of cognitive dissonance required to schedule these votes one right after the other."

McConnell has come under intense scrutiny from some Democrats earlier this week, after he blocked a resolution on Monday expressing that Congress wants special counsel Robert Mueller's full report detailing his investigation into allegations of collusion between President Donald Trump's 2016 presidential campaign and Russia to be made public.