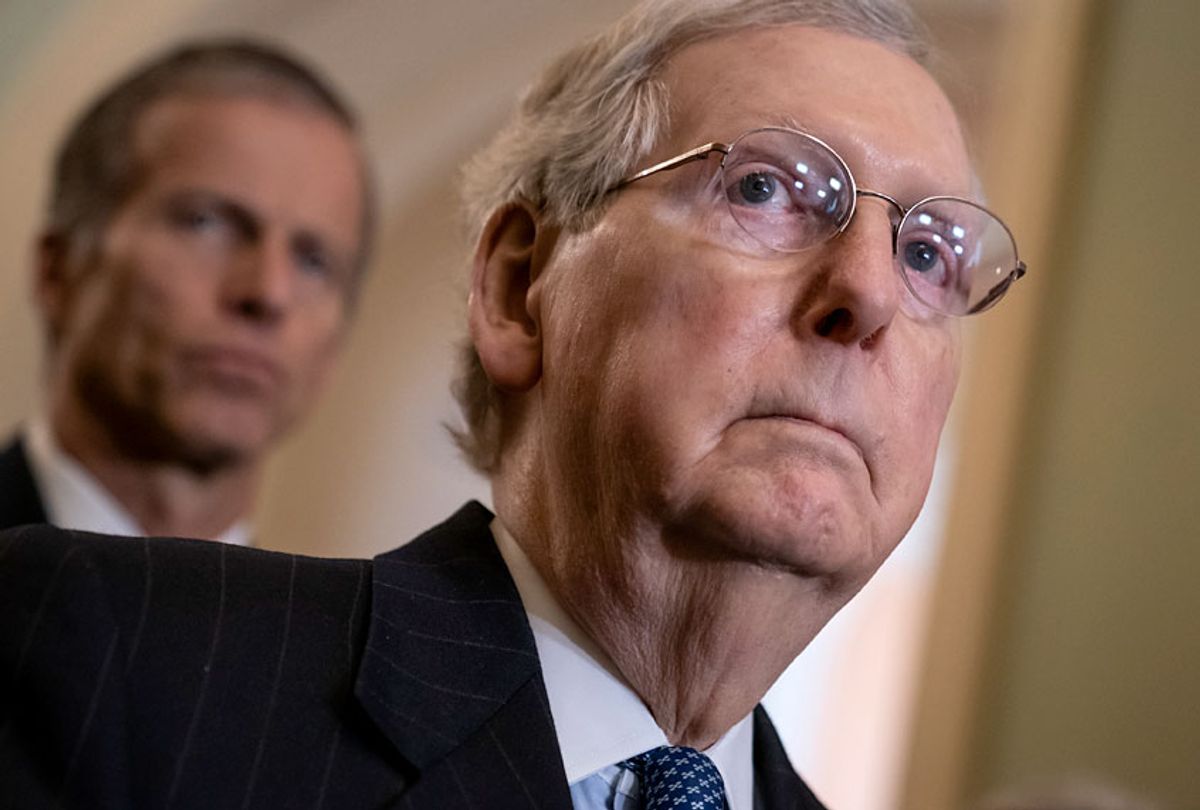 Schumer attempted to pass the measure, which unanimously passed the House of Representatives in a 420-0 vote earlier this month, following the special counsel's submission of his final report Friday.

"Whether or not you're a supporter of President Trump or not, whether you feel there is no good reason to make the report public," Schumer said on the Senate floor Monday. "The American people deserve to see the documentation. What did they do? Who did they approach? What happened?"

"It's a simple request for transparency," Schumer added. "Nothing more, nothing less."

But McConnell objected to Schumer's effort, noting that Attorney General William Barr is working with Mueller to determine what information from his report could be released publicly.

"The special counsel and the Justice Department ought to be allowed to finish their work in a professional manner," McConnell said. "To date, the attorney general has followed through on his commitments to Congress. One of those commitments is that he intends to release as much information as possible."

After McConnell's objection, Schumer added that the resolution did not say the report should be released "immediately" but rather only that it be made public.

"I'm sort of befuddled by the majority leader's reasoning in this regard, because it is not in the words of this resolution," he said.

McConnell countered that the president has had to wait two years while Mueller conducted his investigation, adding that "it's not unreasonable to give the special counsel and the Justice Department just a little time to complete their review in a professional and responsible manner."

Under Senate guidelines, a single member of the upper chamber can try to pass or set up a vote on a bill, resolution or nomination. In turn, a single senator can block a unanimous consent request. McConnell's decision to block Schumer's resolution marks the second time a Republican senator has blocked the New York Democrat's attempt to pass the non-binding measure. Schumer had previously attempted to pass the resolution in mid-March, hours after the resolution cleared the House unanimously, but Sen. Lindsey Graham, R-S.C., objected.

Schumer's second effort to pass the resolution came one day after Barr submitted a four-page summary of Mueller's report to Congress, in which he said that Mueller did not find evidence to prove criminal collusion between the Trump campaign and Russia during the 2016 election. Mueller, according to the letter, did not reach a conclusion on whether the president obstructed justice. According to Barr, Mueller's decision to punt on whether Trump had obstructed justice "leaves it to the Attorney General to determine." Barr said he and Deputy Attorney General Rod Rosenstein concluded Mueller's findings were "not sufficient to establish that the president had committed an obstruction-of-justice offense," which Democrats say warrants further examination and the release of the full report.

Six Democratic committee chairs in the House sent a letter to Barr on Monday requesting that he provide an unredacted copy of Mueller's full report to Congress by April 2. In the three-page letter, the lawmakers wrote that Barr's summary of Mueller's findings "is not sufficient for Congress."

"Congress must be permitted to make an independent assessment of the evidence regarding obstruction of justice," they wrote. "The determinations you have reached regarding obstruction and the manner in which you chose to characterize the special counsel's investigation only raise further questions, particularly in light of the special counsel's decision to refrain from making 'a traditional prosecutorial judgement.'"

The top House Democrats argued that providing the report "in complete and unredacted form," along with the underlying evidence and materials, would be fully consistent with Department of Justice precedent.

"We look forward to receiving the report in full no later than April 2 and to begin receiving the underlying evidence and documents that same day," the letter said. "To the extent that you believe applicable law limits your ability to comply, we urge you to begin the process of consultation with us immediately in order to establish shared parameters for resolving those issues without delay."

"All I'm interested in is for them to release the full report – the full Mueller report," House Speaker Nancy Pelosi, D-Calif., said Monday.

Barr is not required by the regulations governing the special counsel to notify Congress of more than "brief notifications, with an outline of the actions and the reasons for them." His summary report dealt a blow to Democrats, who had hoped Mueller's report would bolster their wide-ranging investigations into Trump and his business dealings.

It remains unclear what other findings Barr will release, although he has previously pledged to make as many of Mueller's findings public as possible. The attorney general is working with Mueller to determine what information from his report could be released publicly — though anything short of Mueller's complete and unredacted report, along with the underlying evidence and materials, is unlikely to be enough for the Democrats, who have vowed to subpoena Mueller and Barr, if needed, to push for full disclosure.

Trump himself said he believes Mueller's full report should be made public, even as he criticized its existence."Let it come out," Trump told reporters last week. "Let people see it." However, it is also unclear whether his administration would fight subpoenas to compel Mueller to testify or attempt to block the release of grand jury material.