Alexandria Ocasio-Cortez shows us all: Here's how to fight Republican climate trolls

Republicans can't defend climate-change denial, so they turn to trolling. Finally progressives are fighting back 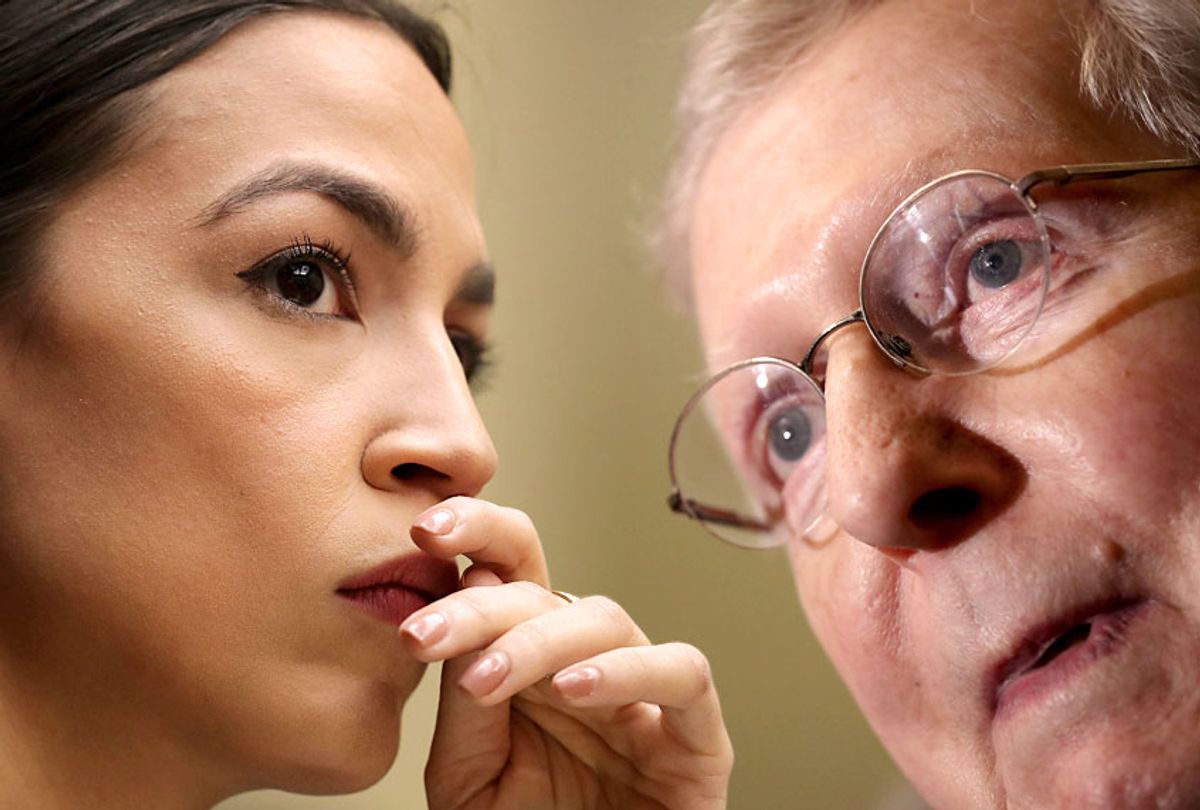 For decades now, Republicans have relied on a single political strategy to protect polluting industries and prevent any progress in the fight against climate change: Denial. It has come in various forms over the years — from flat-out claiming that climate change isn't happening to doubt about whether humans are causing it to a blatantly false narrative about "dissent" in the scientific world. But ultimately, the excuse for inaction always came back to denying that humanity was dealing with a climate crisis in the first place.

But in recent years, full-on climate-change denialism has become politically difficult for Republicans, as the media has increasingly come to view it as the equivalent of denying the laws of gravity.

Republicans are in a bind. They can't deny that there is a problem, but they also don't want to take the political damage that comes from simply admitting that they're happy to put oil company profits over the future of the human race. So they've landed on the solution that the right increasingly chooses when defending indefensible policies: Trolling.

On Tuesday, Senate Majority Leader Mitch McConnell, R-Ky., scheduled a vote on the Green New Deal, a resolution proposed by a handful of Democrats that calls for a massive economic restructuring geared towards fighting climate change while also creating sustainable jobs for the future. The vote was purely a troll, as McConnell used procedural methods to avoid holding hearings and mark-ups on the bill. The idea was to get a bunch of Democrats to vote no, so that the political conversation can be about alleged Democratic hypocrisy, rather than the more uncomfortable conversation about why Republicans care so little for their own children's future that they'll damn the planet through neglect.

This vote was part of the larger trend toward trolling the left as Republicans' only real response to the climate change crisis. Unable to defend their beliefs, conservatives try to change the subject to how insufferable liberals supposedly are, and seek to frame environmentalism in culture-war terms, as if it were a "politically correct" effort by snooty liberals to undermine the lifestyle choices of "real Americans."

On the flipside, however, there are some promising signs that Democrats and progressive activists are learning how to deal with trolling strategies.  Not always; some continue to take the bait. But there were plenty of people on Tuesday, particularly freshman Rep. Alexandria Ocasio-Cortez, D-N.Y., who modeled how to avoid getting derailed by trolls and even, in some cases, how to use their trolling against them.

The debate prior to the vote neatly illustrated the Republican trolling strategy. The main goal for GOP speakers, it appeared, was to try to bait liberals and Democrats into responses that could be used in right-wing media to demonstrate how hysterical, suffocating and outright anti-American the left supposedly is.

Sen. Mike Lee, R-Utah, offered the most obvious example with a speech that Brian Kahn of Gizmodo described as "basically shitposting in real life." Lee used pictures of tauntauns (creatures from the "Star Wars" universe) and comic-book seahorses to imply that the Green New Deal is a joke. He clearly hoped to bait Democrats into nuanced rebuttals that could then be used to portray the left as a bunch of self-serious know-it-alls with no sense of fun.

But then Lee launched into an even more exasperating troll, declaring that the real solution to climate change isn't "political posturing or virtue signaling" but rather to "fall in love, get married and have some kids."

There's an elaborate if tenuous rationale behind Lee's "have more kids" argument, but frankly that's irrelevant. The real purpose of this bizarre speech was to throw out chum, knowing some activist or pundit would respond by saying, "Well, actually, you should be having fewer kids," which could then by used by right-wing media as evidence that the left hates children.

Sure enough, that's what happened. Colby Itkowitz at the Washington Post responded to Lee with research suggesting that "one way an individual could contribute to eliminating greenhouse gases is to have one fewer child." National Review then turned around and portrayed Itkowitz as a PC outrage-peddler trying to shame people for having children. Lee's troll worked in this case, by turning the discussion towards personal choices and allowing conservatives feel defensive and aggrieved over a perceived attack, and deflecting the real issue, which is the need for drastic government action to save the futures of all those children Lee wants people to have.

Conservatives want to avoid that topic by consistently depicting liberals as out-of-touch elites who want to use climate change to compel Americans to stop having babies, driving cars and eating beef. Just as important, conservatives hope to lure liberals into debating those kinds of lose-lose issues instead of the really big and urgent ones. It's critical to refocus the discussion on the moral and economic necessity of dealing with climate change, and dealing with it quickly. Ocasio-Cortez has repeatedly, throughout the discussion of the Green New Deal, shown how to do that.

Contrast her response to  Lee's troll with Itkowitz's unfortunate willingness to take the bait. Instead of engaging Lee's dumb argument, Ocasio-Cortez called it out for what it is, joking on Twitter, "If this guy can be Senator, you can do anything."

By refusing to take dopey arguments seriously and instead turning the tables on the trolling tactics, Ocasio-Cortez derailed Lee's derailing effort. She turned the conversation away from bad-faith debates about the supposedly sinister motives of liberals and back toward a debate about why conservatives refuse to do anything about the existential threat to our species and planet.

Of course this issue is very serious and it won't work for progressives to try to joke their way out of every trolling argument. But as usual, Ocasio-Cortez also modeled how to take the high road with trolls on Tuesday, when Rep. Sean Duffy, R-Wis., trolled her in a committee meeting, introducing an amendment meant to portray environmentalism as an "elite" affectation appropriate only for a "rich liberal from maybe New York or California."

Many Democrats would be tempted to respond by engaging the argument, and trying to debunk the idea that environmentalism is only for the wealthy. Ocasio-Cortez, on the other hand, focused on the larger moral question and on how Duffy looked in claiming that worldwide ecological catastrophe is some kind of joke.

"You want to tell people that their concern and their desire for clean air and clean water is elitist," she yelled at him. "People are dying!"

That video went viral, mostly due to liberals sharing it to celebrate Ocasio-Cortez's strength and moral clarity. As with her response to Lee, Ocasio-Cortez grasps that the way to deal with trolls is to dismiss their so-called arguments as beneath contempt. There is literally no point in engaging with people who act like brats and make bad arguments in bad faith.

No doubt, right wing media still made hay over Ocasio-Cortez's video, responding to her video with "you'd be prettier if you smiled"-style trolls and trying to frame it as "proof" that liberal women are scary and out of control. But the beauty of AOC's approach is that she doesn't have to care about that. That video was huge on the left and only helped build interest and momentum for the Green New Deal. Haters gonna hate, but that shouldn't slow down anyone trying to get real work done.

Ocasio-Cortez is the most prominent example, but it's been a relief in general to see that the liberal and media response to right-wing provocation on climate change is more about dismissal than about taking the bait.

For instance, ever since the Green New Deal resolution was announced, right-wingers have been accusing its supporters of wanting to take away hamburgers and ice cream. It's tempting, especially for the policy wonks and accuracy-obsessed nerds of the left, to engage this argument and respond with nuanced discussions about how it might be better if we all ate less meat, but nobody is suggesting eliminating it completely. But no: That just feeds into the right-wing campaign frames to make ordinary people feel that this whole debate is about shaming them for eating fast food.

So it's heartening to see more responses like this one, from Sen. Chris Murphy, D-Conn., on Twitter, "The hamburger confiscation section of the Five Year Plan never got enough play from Stalin biographers."

This isn't to deny that we might have to have a discussion in the near future about reducing American meat consumption. But the right's hysterics about banning hamburgers are not offered in good faith. By dismissing such trolling tactics, liberals send a clear signal that they will only engage conservatives if and when the latter grow up and start acting like adults. It also helps build confidence on the left, and sends a strong signal to worry less about this kind of nonsense.

Republicans troll because they know they can't win these debates on the merits. It can be easy to forget that amid the constant churn of political discourse, especially in our tense and dramatic times. But when it comes to fighting climate change, that kind of clarity is critical: We need to move forward with the speed and certainty of purpose necessary to this enormous task.