She told journalist Susan Page that by the end of her life, she no longer considered herself to be a Republican 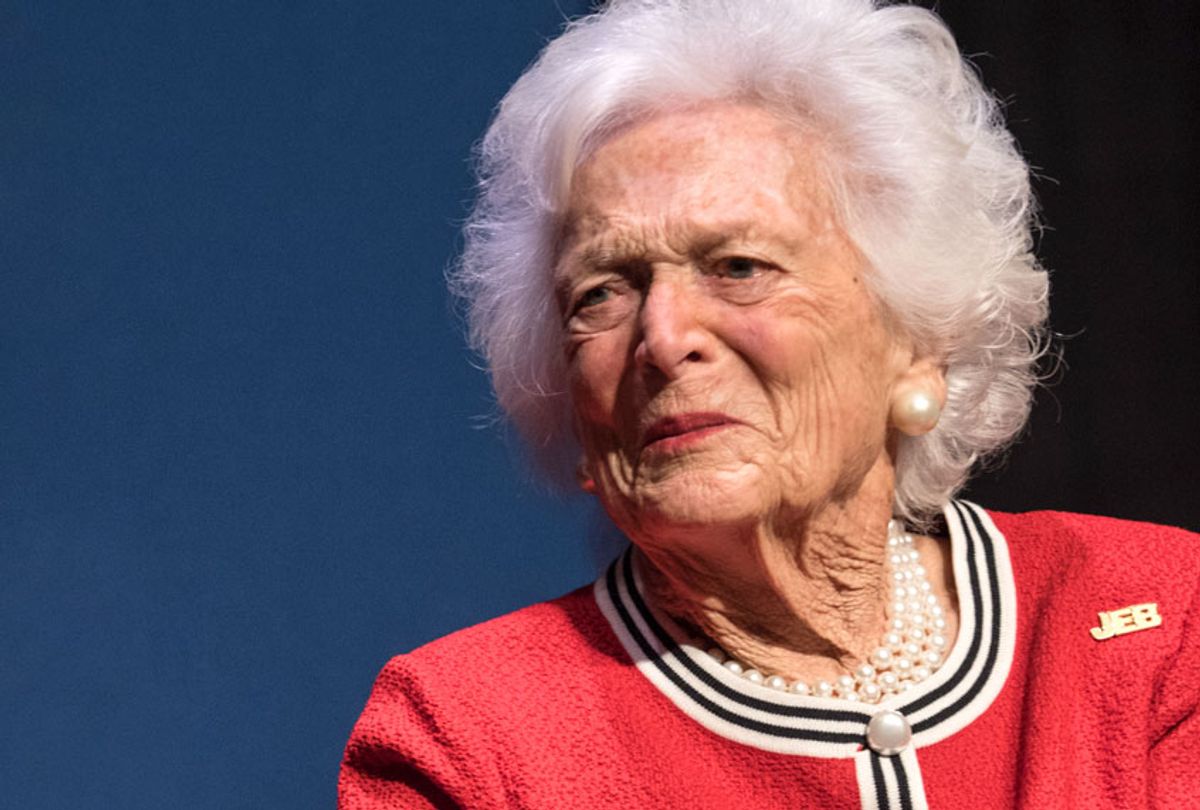 The late first lady Barbara Bush so fiercely disliked President Donald Trump that she blamed him for what she called a "heart attack" and kept a jokingly-gifted clock counting down to the end of his Oval Office tenure by her bedside table until the day she died, according to an excerpt of a new biography about her.

"It wasn't technically a heart attack, though she called it that," USA Today's Susan Page, who spent hours interviewing Bush in the final six months of her life, wrote according to excerpts released Wednesday of her upcoming biography on the former first lady titled "The Matriarch."

Page added, "It was a crisis in her long battle with congestive heart failure and chronic pulmonary disease that hit her like a sledgehammer one day in June 2016" when Trump clinched the Republican presidential nomination after relentlessly bashing her son, former Florida Gov. Jeb Bush, who also ran for president in 2016. Bush told Page that "angst" had contributed to the heart episode. Page noted an ambulance was called to take the former first lady to the hospital at the time.

Bush revealed she was at first hesitant to have her son enter the presidential race in 2016 — not because she thought he was unfit to lead the country, but because she had seen how nasty White House runs and the presidency could become. She eventually campaigned for him "not only because she would do just about anything for her family, but also because she was alarmed by Trump," Page wrote.

Bush died last April and her husband, the 41st President George H.W. Bush, died in November. She told Page that by the end of her life, she no longer considered herself to be a Republican. "I'd probably say no today," Bush told her in February 2018. Page described the former first lady's admission as a "stunning acknowledgement" from "one of the most recognizable faces of the Republican Party through two presidencies."

"She was the matriarch of one of the GOP’s leading families," Page wrote. "But after Trump's rise, she saw it as a party she could not continue to support — a party she no longer recognized — even as one of her grandsons, George P. Bush, was on the ballot as a Republican running for re-election as Texas land commissioner."

In "The Matriarch," which will be published April 2, Page documented Bush's decade-long dislike of Trump. In diary entries from the 1990s, which the former first lady made available to Page, she said "Trump" meant "greed, selfishness and ugly." In a recent interview, she told Page, "I don't understand why people are for" Trump. In another, she expressed "astonishment" that women could support his presidential bid.

In 2016, the former first lady cast a ballot for her son Jeb Bush for president in the general election, while her husband voted for Democratic presidential candidate Hillary Clinton. After Trump won, her husband called the president-elect to offer congratulations and Barbara Bush wrote in her diary that Trump "was very nice" in that conversation.

"He said that George was a great president, and he admired us both. He said Jeb was strong and a great man. He is trying . . . at this moment . . . to be conciliatory," she wrote. "He says he wants to represent all the people."

After initially drafting a funny congratulatory letter to former President Bill Clinton, having assumed he would join the "First Ladies Club," Bush wrote first lady Melania Trump to welcome her into the "very exclusive" cohort.

"Dear Mrs. Trump, The world thought I was writing this note to Bill Clinton. I am glad that I am not. I wanted to welcome you to the First Ladies very exclusive club," she wrote. "My children were older, and therefore I did not have the problems you do. Whatever you decide to do is your business and yours alone. Living in the White House is a joy, and their only job is to make you happy. If you decide to stay in NYC that will be fine also. When you come to the White House, let your son bring a friend. That is my unasked for advice. God Bless you."

After Trump was elected, a friend in Maine gifted Bush a Trump countdown clock as a joke, Page details in her book. The clock displayed how many days, hours, minutes and seconds remained in Trump's term. The former first lady put it on a side table in her bedroom, later bringing it to Houston. The clock was by her bedside until she died, Page wrote.

"I'm trying not to think about it," Bush told Page in a 2017 interview just before the first anniversary of Trump's election. "We're a strong country, and I think it will all work out."