Donald Trump Jr. reveals he may one day follow his father's footsteps into politics

"My father decided to get into politics at 68. I'm 41," the president's eldest son says. "I've got plenty of time" 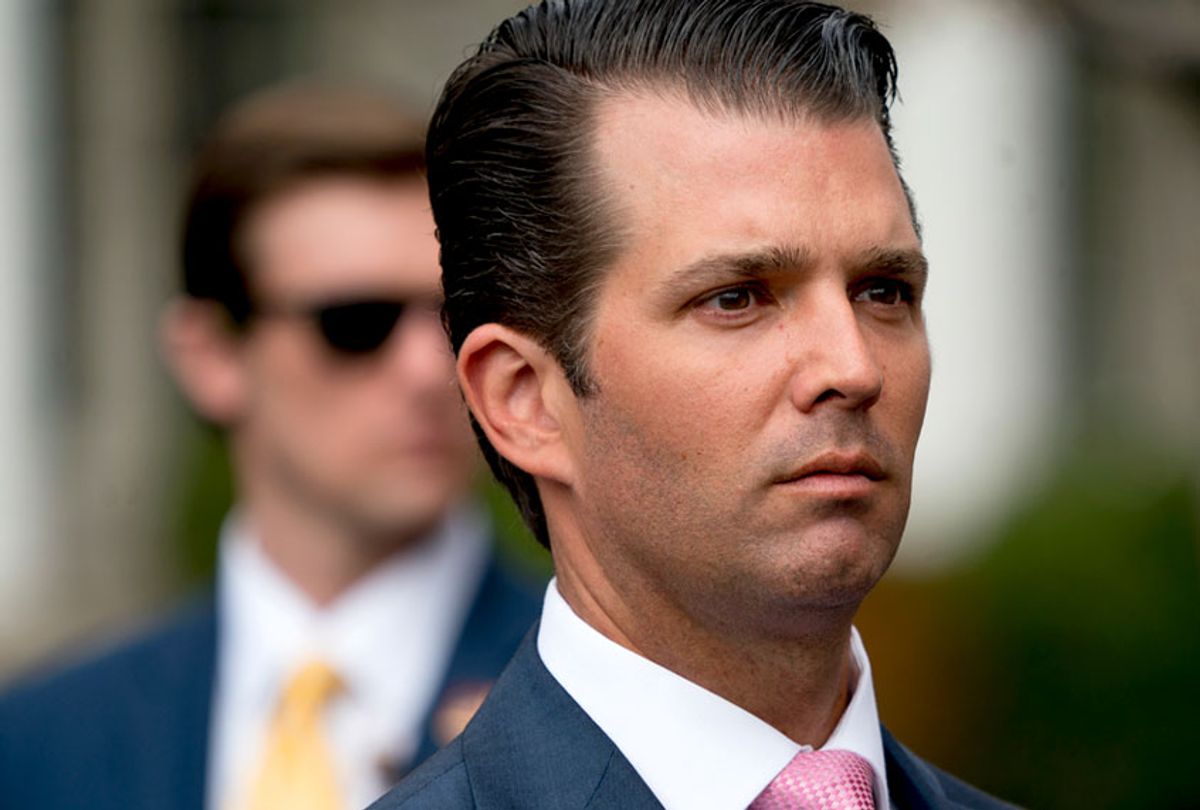 In an interview with Bloomberg Radio's "Sound On" on Wednesday evening, Trump Jr. said he would not rule out a possible run for office.

"As for the future, I never want to rule it out. I definitely enjoy the fight. I definitely like being out there," Trump Jr. said.  "And I love being able to see the impact and the difference that it makes on these people's lives that I get to see all over the country."

The president's eldest son said he has "plenty of time" to mull over his political aspirations given his father's late entry into the political arena.

Trump Jr. did not specify what office he might consider pursuing. For now, he said he was focused on getting "the country back on track" and promoting his father's policies around the country.

"If I can be helpful and I can be powerful voice for that that's my primary focus," he added.

Trump Jr. also said he was relieved about the completion of special counsel Robert Mueller's investigation into allegations of collusion between his father's presidential campaign and Russia during the 2016 election last week. His victory lap comes several days after Attorney General William Barr submitted a four-page summary of Mueller's probe to Congress, in which he indicated the special counsel had not found evidence to prove criminal collusion between members of the Trump campaign and Russia during the 2016 election cycle.

Barr also wrote that Mueller did not reach a conclusion on whether the president had obstructed justice, although he noted the special counsel's decision to punt on whether Trump had done so "leaves it to the Attorney General to determine." The presdient celebrated Barr's letter, claiming it was "total and complete exoneration."

"Obviously, we were happy and there's some relief there," Trump Jr. said. "I knew we didn't do anything wrong, but just because something is nonsense doesn't mean you don't still have to deal with nonsense. And you don't have to deal with half of the country and leading congressional candidates and people for president saying you're being treasonous and all of this nonsense."

The special counsel's wide-ranging, two-year probe into the president's campaign and foreign election interference cast a cloud over Trump's administration from its earliest days. In his first one-on-one interview since Mueller completed his investigation, Trump described Mueller's probe as "an attempted takeover of our government, of our country — an illegal takeover" and said FBI officials investigating allegations of collusion between his presidential campaign and Russia had "committed treason." Trump said that despite being the "most innocent human being," he did not know what Mueller's report would conclude, because "you know, maybe they would take a sentence from here and a sentence from there."

Some political observers and legal analysts speculated that Trump Jr., an executive vice president at the Trump Organization and a potential rising star on the conservative political scene, could be in legal jeopardy in connection to a June 2016 campaign meeting he attended with Russians at Trump Tower, set up with the promise of obtaining "dirt" on his father's Democratic challenger, Hillary Clinton.

Trump Jr. on Wednesday told "Sound On" that he spent 27 hours testifying before Congress and that Mueller's team "would have been glad" to indict him and his father if given the chance. "They would've reveled in it," he added.

Trump Jr. and his father repeatedly denounced Mueller's investigation as a politically-motivated "witch hunt" and a "hoax." The president has previously accused Mueller's team of "viciously telling witnesses to lie about facts," comparing the probe to the McCarthy period, named for former Sen. Joseph McCarthy (R-Wis.), who accused hundreds of Americans of being communists or communist sympathizers in the 1950s.