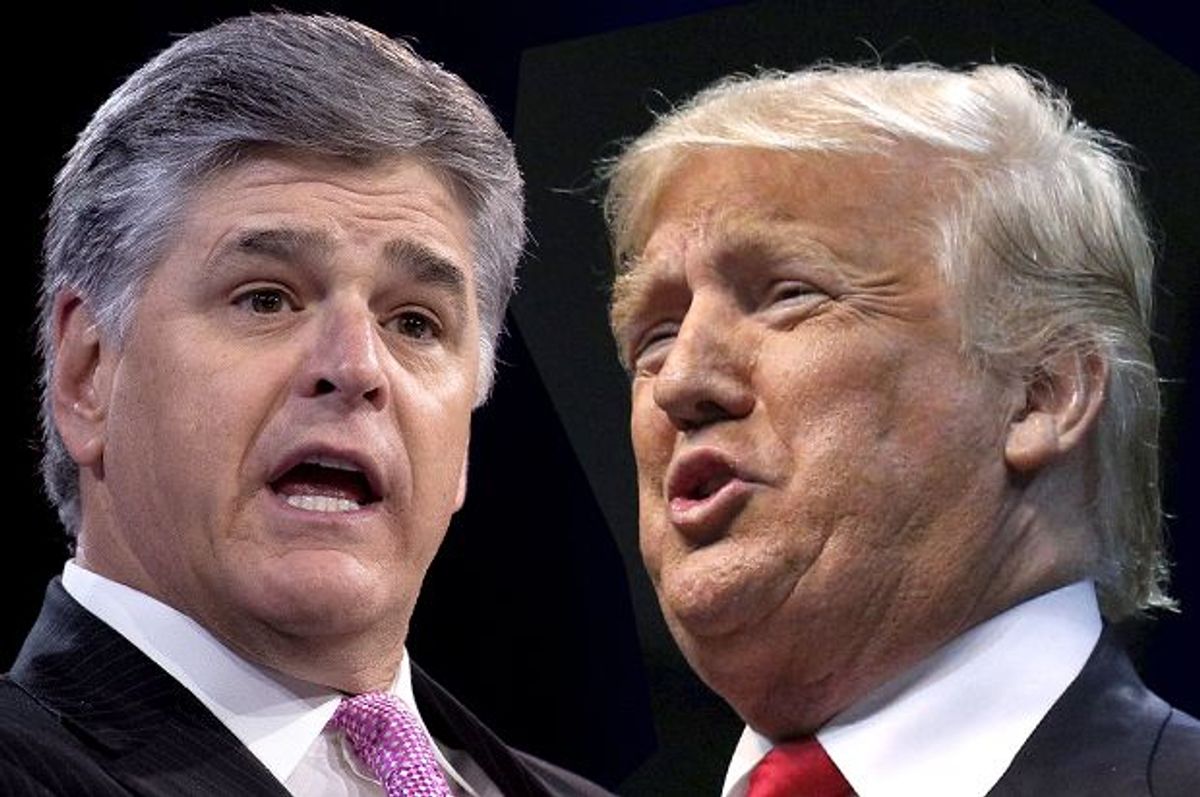 In a lengthy and wide-ranging interview with Fox News host Sean Hannity, President Donald Trump praised Attorney General William Barr, refused to rule out pardoning indicted campaign aides, criticized the Green New Deal and applauded Fox News for its coverage throughout special counsel Robert Mueller's investigation into Russian interference in the 2016 election, which he slammed as "an attempted government takeover."

Trump called into Hannity's show Wednesday night and talked for 45 minutes with the host, who acts as his informal adviser, in his first one-on-one interview since Mueller announced the completion of his investigation last week into whether the president's 2016 campaign colluded with Russia to influence the outcome of the election. The president spent most of the interview disparaging the special counsel's investigation. He ripped the FBI as "dirty cops," former FBI director James Comey as "a terrible guy," and former CIA director John Brennan as a "sick person."

Trump's victory lap comes several days after his attorney general submitted a four-page summary of Mueller's report to Congress, in which he indicated the special counsel had not found evidence to prove criminal collusion between members of the Trump campaign and Russia during the 2016 election cycle. Barr also wrote that Mueller did not reach a conclusion on whether the president had obstructed justice, although he noted the special counsel's decision to punt on whether Trump had done so "leaves it to the Attorney General to determine." Trump celebrated Barr's letter, claiming it was "total and complete exoneration."

In his interview with Hannity, Trump heaped praise on Barr, who will ultimately decide how much of Mueller's report will be made public, calling him "a great gentleman" and saying "had he been there initially, this all wouldn't have happened."

Barr is not required by the regulations governing the special counsel to notify Congress of more than "brief notifications, with an outline of the actions and the reasons for them." His four-page overview of Mueller's report dealt a blow to Democrats, who had hoped the special counsel's account of his wide-ranging two-year probe into the president's campaign and foreign election interference would bolster their wide-ranging investigations into Trump and his business dealings.

It remains unclear what other findings Barr will release, although he has previously pledged to make as many of Mueller's findings public as possible. The attorney general is working with Mueller to determine what information from his report can be released publicly — although anything short of Mueller's complete and unredacted report, along with the underlying evidence and materials, is unlikely to be enough for Democrats, who have vowed to subpoena Mueller and Barr if needed to push for full disclosure. Barr plans to issue a public version of Mueller's report within "weeks – not months," a Justice Department official said Tuesday.

Hannity asked Trump on Wednesday whether he would extend his pardon power to former national security adviser Michael Flynn and former campaign aide George Papadopoulos, who were charged with crimes in Mueller's probe. Early in the investigation, Trump reportedly asked aides about his ability to pardon those implicated in the probe, including his family members, and asserted his "absolute right to PARDON myself."

"Many, many people were in­cred­ibly hurt by this whole scam," Trump told the Fox News host. "I don’t want to talk about pardons now, but I can say it's so sad on so many levels."

Hannity then showed Trump several clips of CNN pundits and analysts predicting that Mueller would uncover evidence of a Trump conspiracy with Russia. The president used the opportunity to blast news networks like CNN and MSNBC, which he slammed as "so horribly fake," before publicly praising Fox News and many of its hosts for their "credibility" throughout their coverage of Mueller's probe. The president even singled out individual anchors, including “Fox & Friends” co-hosts Steve Doocy, Ainsley Earnhardt and Brian Kilmeade, as well as Hammett and his fellow primetime star Laura Ingraham.

"I want to thank Fox," Trump said. "I want to thank some of those people I just named but also many others. They've been so fantastic to me, and really, to our country . . . They're really amazing people, great people."

The president then took aim at Comey, whom he fired in May 2017 and on Wednesday also had his first interview since the end of the Mueller probe with NBC's Lester Holt. Trump, in his interview with Hannity, called the former FBI director a "terrible guy," and claimed the comments he made shortly after Comey's ouster to Holt were misconstrued by the network. Trump initially said he removed Comey on the recommendation of Deputy Attorney General Rod Rosenstein, but, in his interview with Holt, he revealed that it was his decision to fire Comey and cited his frustration with "the Russia thing." Trump insisted Wednesday he did not axe the FBI chief to obstruct justice, telling Hannity he knew firing him would be politically damaging and only increase scrutiny toward White House.

"It would be a bigger deal if I fired him, and I knew that," Trump said.

Trump also took a swipe at House Intelligence Committee Chairman Adam Schiff, D-Calif., one of the president's most outspoken critics who has suggested in recent months there was compelling evidence of collusion between Trump's campaign and Russia.

"He should be forced out of office. He is a disgrace to our country," Trump said, echoing comments made in recent days by White House officials and top Republican lawmakers.

The president went on to describe the special counsel's probe as "an attempted takeover of our government, of our country – an illegal takeover” and said FBI officials investigating allegations of collusion between his presidential campaign and Russia had "committed treason." Trump said that despite being the "most innocent human being," he did not know what Mueller's report would conclude, because "you know, maybe they would take a sentence from here and a sentence from there."

Trump also said he would "absolutely" release the full and unredacted materials related to Foreign Intelligence Surveillance Court orders used by the FBI to investigate his former campaign aide Carter Page. He told Hannity he wanted to "get to the bottom" of how the Russia collusion narrative began. The FBI released redacted records of Page's surveillance in July 2018.

"I have plans to declassify and release. I have plans to absolutely release," Trump told Hannity. "I have some very talented people working for me, lawyers and they really didn't want me to do it early on . . . A lot of people wanted me to do it a long time ago. I'm glad I didn't do it. We got a great result without having to do it, but we will. One of the reasons that my lawyers didn't want me to do it is they said if I do it, they'll call it a form of obstruction."

Hannity then asked Trump about his agenda, especially his plans to construct a border wall along the U.S.-Mexico border. Trump revealed the government has repaired and built "many, many" miles of fencing along the nation's southwestern border, and he called the construction of the border wall "absolutely vital" because "of human traffickers, the drugs, everything that's coming across" what he called the "soft points" — the areas of the border without fencing.

Trump and Hannity then talked about the Democrats' proposed climate change resolution, known as the Green New Deal, which the duo called the "New Green Deal."

"The New Green Deal is ridiculous, but I don't want to speak badly, because I want them to keep going forward with it," Trump said. "I really look forward to campaigning [against it]."

"The green new deal is going nowhere," he concluded.