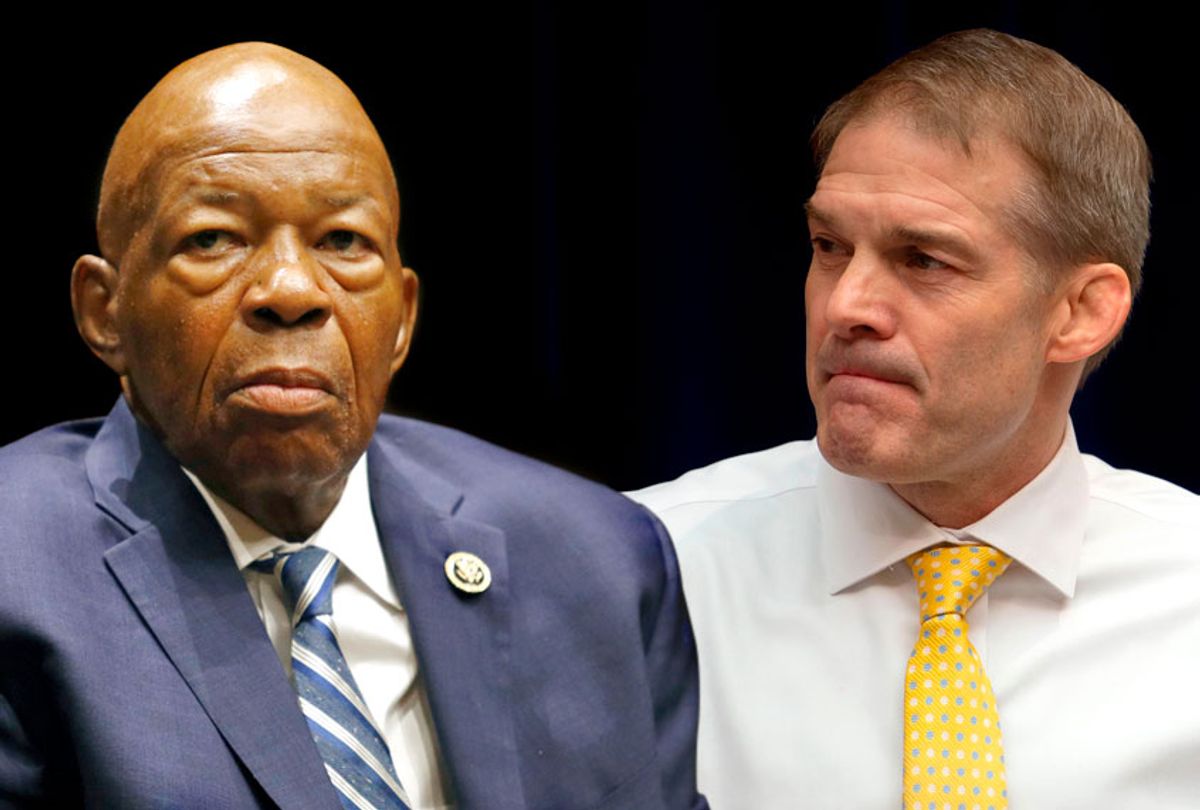 If former Intelligence Committee chair Devin Nunes was Donald Trump’s greatest congressional weapon when Republicans controlled the House of Representatives, the president has a new hitman now. Rep. Jim Jordan of Ohio, a Freedom Caucus member who ran unsuccessfully against Kevin McCarthy for the minority leadership, is now the president's principal warrior against the Democratic majority, waging a nonstop war of obstruction.

Jordan serves as ranking member of the House Oversight Committee, where — along with fellow Freedom Caucus member Mark Meadows of North Carolina — he attained right-wing celebrity status during the Michael Cohen hearing. Jordan has loudly objected to any and all Democratic efforts to probe the Trump administration or the president's personal and business finances. Instead, he has pressured Deputy Attorney General Rod Rosenstein to assign a brand new special counsel to investigate alleged anti-Trump bias on Robert Mueller's team of federal prosecutors — and even tried to have Rosenstein impeached.

The House Oversight Committee has already seen an 18 percent drop in funding over the last decade, according to Roll Call, and Jordan is the only ranking member in the entire House to lobby for cuts to his own committee’s budget this session. Jordan’s opposition to Democrats’ increased budget proposal — which would still be less than funding levels under Barack Obama — would leave the Democratic staff unable to fund 15 vacant positions, according to the office of Rep. Elijah Cummings, D-Md., the committee chair. As several committees flex investigative muscles that Republicans allowed to atrophy during the first two years of the Trump administration, Jordan has ramped up his complaints of malfeasance and abuse of power.

Jordan criticized Democrats last month for bringing in Michael Cohen, Trump’s former personal lawyer, for public testimony before he begins a three-year prison sentence. Even after Cummings explicitly noted that Cohen’s hearing was not the first Democrats had held after taking control of the gavel in January — pointing to the panel’s oversight of the Office of National Drug Control Policy’s efforts to combat the opioid crisis and rising prescription drug prices — Jordan still made the false claim that Cohen was the first witness to testify before the committee in 2019.

This week, Jordan and Meadows filed a letter of complaint about Cummings’ decision to open an investigation into allegations made by Cohen during his testimony. Cohen accused Trump, in sworn testimony, of committing bank fraud and said that Trump had at times deflated the value of certain assets to reduce his real estate taxes in an effort to defraud lenders and insurers.

In a letter dated March 20, Cummings asked Trump's accountants to turn over audits and other statements about the financial condition of Trump or the Trump Organization, going back as far as 2009, by April 3. Cohen had already provided the committee with financial statements from 2011 to 2013, provided by Trump to Deutsche Bank when he tried to buy the Buffalo Bills, that suggest he fraudulently exaggerated his wealth. (Trump has declined to release his tax returns, unlike every president since Jimmy Carter.)

Between June of 2012 and March of 2013, "the value of the President's assets appears to have skyrocketed by $4.2 billion," Cummings' letter notes, explaining that this increase in value came from only a "single line item" in Trump's assets that did not exist in 2011 or 2012. On the financial statements provided by Cohen, Trump's big spike in net worth is due to his "brand value,” a category absent from his 2011 and 2012 statements. Trump's attempt to acquire the Bills was a failure, but Cummings’ letter notes that these statements still "raise questions about the President's representations of his financial affairs on these forms and on other disclosures, particularly relating to the President's debts."

But even before the probe was publicly announced by the committee, Jordan and Meadows released their own letter to Trump’s accounting firm, urging the company not to cooperate with their own committee's investigation.

"His inquiry does not appear to have a valid legislative purpose and instead seems to seek information to embarrass a private individual," wrote Jordan and Meadows of Cummings in a letter to the accountants.

The Republicans also complained directly to Cummings that he did not consult with them before sending his letter to the accounting firm. "We urge you to reconsider your ill-conceived inquiry into the finance of President Trump when he was a private citizen,” the GOP duo wrote in another letter.

“The American people sent us here to make government work better for them. The 116th Congress is still young. There is still time to pivot away from your repeated partisan attacks,” Jordan wrote to Cummings.

It is, of course, Congress' job to provide oversight of the executive branch, especially allegations that the president may be corrupt.

Mazars USA, the accounting firm, issued a statement Wednesday after Jordan made the probe public, saying that it “believes strongly in the ethical and professional rules and regulations that govern our industry, our work and our client interactions.” It declined to comment further about Trump.

"We’re just seeking the truth, that’s all," Cummings told reporters this week. "They complain about every single thing I do," he said of his Republican colleagues.

He shot back more forcefully with a letter of his own on Wednesday.

“I suppose it is no longer a surprise that Republicans on the Oversight Committee are now opposed to oversight itself —especially since a Republican entered the White House," Cummings said in a statement. "If they had their way, the Committee would just close up shop for the next two years, but that is not what the American people elected us to do. We are following-up on specific allegations regarding the President’s actions based on corroborating documents obtained by the Committee, and we will continue our efforts to conduct credible, robust, and independent oversight.”

Cummings is doing his job. Jordan and Meadows argument that seeking information on Trump's business career and personal finances is not “responsible and legitimate oversight” rings hollow in light of a new Washington Post report that details how the president entered the White House with a history of “self-appraisals of his buildings’ value — which aimed to impress, instead of aiming for reality.”

“When compiling these statements of financial condition,” the Post reported, “those accountants have said they did not verify or audit the figures in the statements. Instead, when Trump provided them data, they wrote it down without checking to see whether it was accurate.”

The White House, for its part, is also trying to obstruct Cummings’ attempt at oversight. Earlier this month, White House counsel Pat Cipollone wrote a letter to Cummings rejecting the committee's request for documents as "extraordinarily intrusive."