Jordan Peele is bringing "Twilight Zone" back, and not a moment too soon 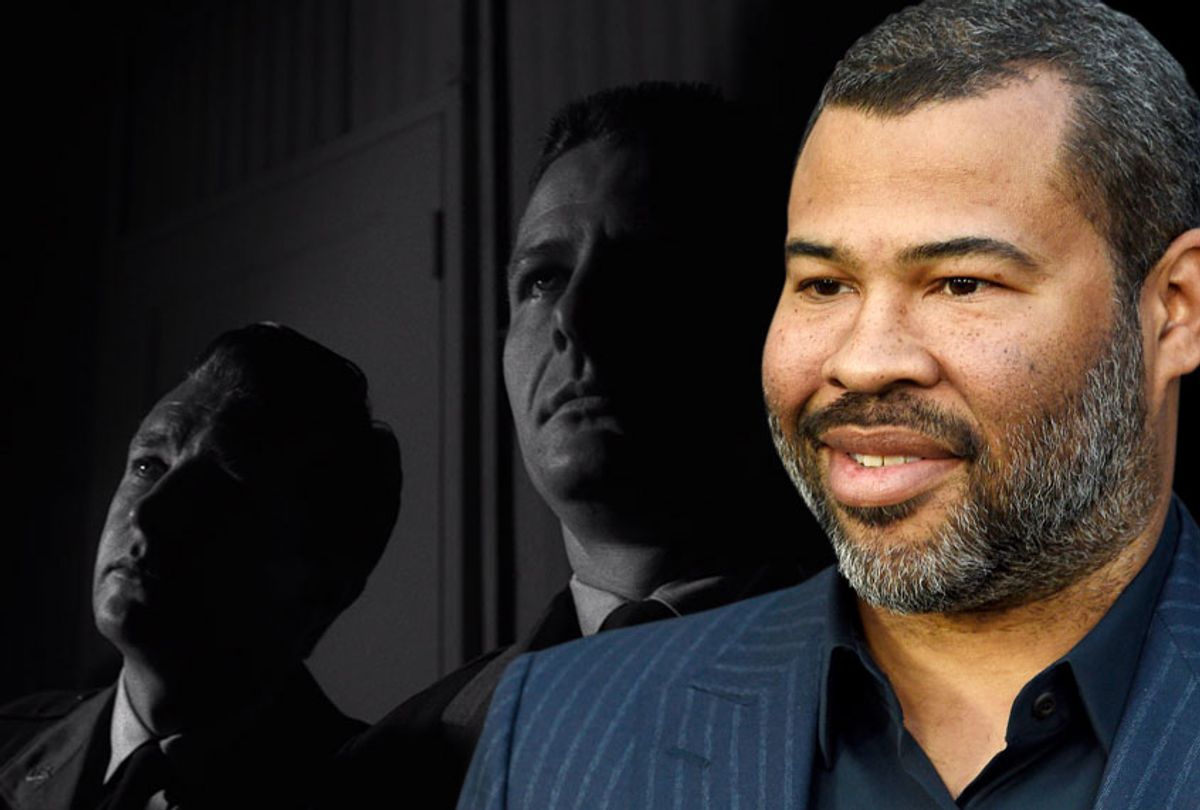 There probably isn't a better person to reboot "The Twilight Zone" than Jordan Peele.

The trick to making a good "Twilight Zone" episode isn't just including fantastical elements; the truly classic "Twilight Zone" stories also coalesce around left-wing political themes, using their metaphysical concepts to illustrate important points about social issues, human nature and virtually anything else that can advance a progressive narrative. Peele, whose reboot will debut Monday on CBS All Access, has already demonstrated his ability to do that in his horror movie "Get Out," and his most recent film "Us" is a strong adaptation of the "Twilight Zone" episode "Mirror Image" (more on that in my review). That episode, like most of the great ones produced by the original series, was written by Rod Serling, who like Peele blended horror and social commentary with a deftness that almost seems easy until you step back and examine the craftsmanship.

These are all qualities desperately needed in America during the Donald Trump era. We live at a time when the American president defends neo-Nazi protesters, blatantly appeals to white supremacist sentiments in his speeches, demeans women through his policies and personal actions, and wins over voters by playing to their economic insecurities and existential malaise. That last point is instructive, because not all of the impulses that have been captured by the Trump movement should be lightly dismissed. Yet for every legitimate concern about economic disenfranchisement and labor oppression — issues that Trump has paid lip service toward caring about, but has actively worsened through his policies — there is the undeniable fact that he was elected by stirring up the worst elements of the American spirit.

When Serling saw this happening in the late 1950s and early 1960s — an era shortly after the demise of Joe McCarthy and before the ascendancy of the New Right — he wrote about it and created a classic TV series. If Peele can achieve a similar feat with his reboot, as well as continue his hot streak after "Get Out" and "Us," he will have performed a great service for American culture. That's why it is worth exploring how the best episodes in the original series touched on important subjects of the day — and why the worst ones failed.

One of the most prominent themes in the original "Twilight Zone" was its opposition to right wing authoritarianism. In the 1961 episode "Death's Head Revisited," a former SS captain (Oscar Beregi, Jr.) revisits the Dachau concentration camp to fondly reminisce about the days when he was a powerful and feared man — a direct commentary not just on the horrors of anti-Semitism and genocide, but also about the psychological complexion of the people who gravitate toward political systems that perpetrate those atrocities. This theme was even more fully fleshed out in the controversial 1963 episode "He's Alive," in which Dennis Hopper plays a burgeoning American neo-Nazi who masks his vulnerability with a hateful political agenda that begins to achieve a frightening amount of mainstream acceptability.

"He's Alive" deserves particular recognition because it became the source of controversy when it was released, with one editorial arguing that "the speech of the young Nazi, in the purely political aspects, sounded a great deal more like Barry Goldwater, a man of Jewish lineage, than it did like Hitler." This is not a comparison to be taken lightly: Goldwater, then a United States Senator from Arizona, won the Republican presidential nomination one year after this episode was released, in large part because of his opposition to civil rights legislation and outspoken conviction that liberal social programs were inherently Communistic. Although Goldwater was defeated in a landslide, his nomination was a watershed moment in American political history, pushing the Republican Party to the far right and abandoning its historic association with the cause of racial equality.

Serling's response to the right-wing criticisms of his episode, incidentally, are quite instructive. As The New York Review of Books recalled last year (from a passage quoted in "The Twilight Zone Encyclopedia" by Steven Jay Rubin), Serling addressed the right-wing critics of his day by noting that they believed "racism, bigotry and hatred should be of little consequence to us in view of the fact that communists are trying to take over our government, invade our schools, and subvert our institutions… But I submit that we have other enemies no less real, no less constant, and no less damaging to the fabric of a democracy. It’s when we hear denials that these people exist, and that their poison is being disseminated, and that any comment to the effect is irrelevant—I wonder if The Twilight Zone isn’t something more than a television idea."

Serling's willingness to expose right-wing authoritarians as bullies and demagogues wasn't limited to those two stories. In the 1962 episode "Four O'Clock," a proto-Alex Jones type played by Theodore Bikel makes a living with a newsletter in which he passes judgment on the "evil people" destroying American society, from Communists and subversives to random individuals who upset or annoy him. In the 1964 episode "I Am the Night — Color Me Black," a small town that has united against a progressive activist who murdered a Klansman is plunged into literal darkness as everyone wallows in their hatred. Three years earlier, the 1961 episode "The Obsolete Man" presented an even more bleak version of the kind of Orwellian dystopia that would emerge if the anti-intellectualism indelibly associated with right-wing authoritarian regimes was allowed to go unchecked.

This isn't to say that all of the "Twilight Zone" efforts at addressing authoritarianism were effective. Perhaps unsurprisingly, the biggest failure in this regard was an episode that attempted to skewer left-wing totalitarianism, the 1961 story "The Mirror." Starring Peter Falk as an obvious Fidel Castro knock-off, the episode fails not only because of its problematic depiction of ethnicity but because it reduces the concerns of Castro and his followers to simplistic stereotypes about resentful peasants and paranoid revolutionaries. One doesn't have to like Castro to realize that Serling seemed to be phoning it in here, perhaps as a way of seeming balanced, and consequently failed to take down this particular despot in any kind of sharp or insightful way.

The original "Twilight Zone" also worked because it contained many episodes that focused on the need for human beings to feel that their lives possess purpose. In the 1964 episode "The Brain Center at Whipple's" (which, in addition to being written by Serling, was helmed by future "Superman" and "Lethal Weapon" director Richard Donner), factory workers are laid off in droves as a profit-obsessed business owner keeps automating his company. In the 1961 story "A Game of Pool" (written by George Clayton Johnson), a professional pool player played by Jack Klugman has an opportunity to compete against a long-deceased pool champion (Jonathan Winters) in order to demonstrate that he is the greatest. Meanwhile in the 1962 episode "The Changing of the Guard," an elderly literature teacher (Donald Pleasence) contemplates suicide as he faces mandatory retirement and concludes that he has achieved nothing with his life.

While these three stories may seem different on a superficial level, each one succeeds because they frame broad social issues within the deeply personal stories of their main characters. "The Brain Center at Whipple's" confronts the excesses of capitalism and its disempowerment of the working class through the stories of factory workers and one particularly greedy businessman. In "A Game of Pool," the question of the high premium that Americans place on ambition and "success" is challenged when a man who has devoted himself to a game in order to feel important has to risk everything he has in order to prove his own worth. With "The Changing of the Guard," the value of education and short shrift given to American teachers is acknowledged through the story of one educator suffering an existential crisis.

"The Twilight Zone" also contained fantastic episodes that dealt with women's rights. This isn't to say that the series was perfect in this regard — far more episodes focus on male characters than female ones, and several play on repugnant sexist stereotypes for their main female characters ("A Short Drink from a Certain Fountain," "I Dream of Genie," "The Chaser"). Yet there are two which succeed in spades: The 1964 episode "Number 12 Looks Just Like You," perhaps the most under-appreciated episode from the entire series, explores obsessions with female beauty as an allegory for conformity and the valuation of being "normal" over all other considerations, while "The Sixteen-Millimeter Shrine" from 1959 is a heartbreaking look at how aging is viewed as a flaw in show business and, by implication, elsewhere in America.

There are also the "Twilight Zone" episodes that don't deal with specific social issues but rather more abstract questions of how power can corrupt individuals. In the 1963 episode "On Thursday We Leave for Home" (which I analyzed at length in 2017), a colony of people marooned on a desolate desert planet are rescued by a spaceship, only to discover that the political structure they established on their old world may not survive being transplanted to a new one. Similarly, the 1962 episode "The Little People" explores why the opportunity to have power matters so much to people, to the point where they will sacrifice their own morals and self-interest if an obvious opportunity to feel like a god presents itself.

There were also fantastic "Twilight Zone" episodes dealing with a range of other subjects: The horrors of war ("Judgment Night," "A Quality of Mercy," "King Nine Will Not Return," "No Time Like the Past," "The Passersby"), the danger of mob mentalities ("The Monsters Are Due on Maple Street," "The Shelter"), the dangers of superstition ("Nick of Time," the highly problematic "The Jungle"). Because the "Twilight Zone" was an anthology series with a very broad premise — the stories had to be fantastical, although a handful didn't even involve the supernatural ("The Silence," "The Jeopardy Room") — you could stretch the premise to incorporate virtually any subject and have it work.

Given his oeuvre up to this point, there is every reason to believe that Peele could succeed where all of Serling's successors failed. Peele has already demonstrated that he, like the best American fantasy and sci-fi writers, can tell a ripping good yarn while making larger points about humanity. I suspect that if Serling were alive today, he would be proud to have Peele assume his mantle. And if Peele can make a show even half as brilliant as the original "Twilight Zone" series, he will perform a great service to the United States at this juncture in its history.