Media contagion of suicide is real. Here's how to fix it. 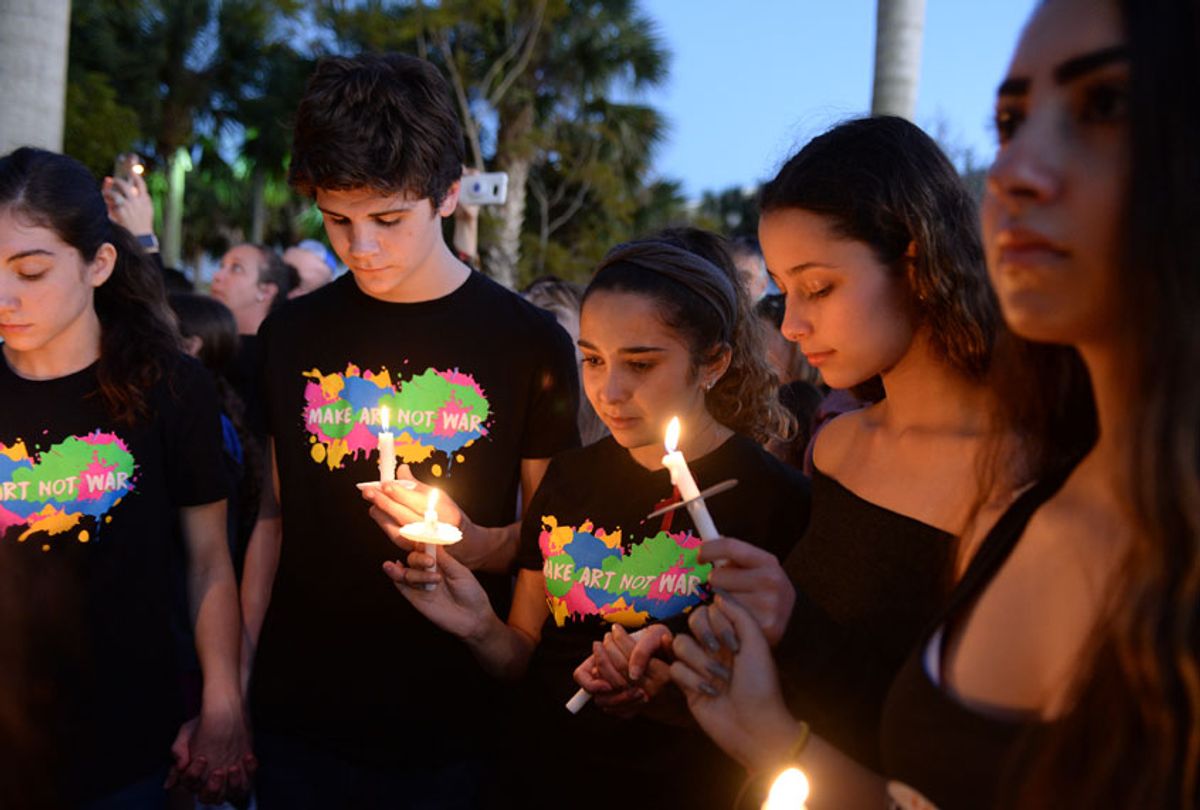 Candlelight memorial service for the victims of the shooting at Marjory Stoneman Douglas High School at Pine Trail Park on February 15, 2018 in Parkland, Florida. (mpi04/MediaPunch/IPX)
--

Over the past few days, people of all ages have watched or read around-the-clock media coverage of the suicides of Sydney Aiello and an unnamed male, both of whom had ties to the Marjory Stoneman Douglas (MSD) High School shooting in Parkland, Florida last year. As if the MSD suicides weren’t difficult enough, on Monday we learned that Jeremy Richman, who lost his daughter in the Sandy Hook shooting, also died by suicide. These are the cases that have become widespread news, and simultaneous to their occurrence, a suicide has occurred every 12.9 minutes in the U.S. In fact, there are approximately 121 suicides per day in the U.S. for a total of 40,000 deaths per year.

Though we are not yet certain the recent suicides were due to contagion, it is likely they were due, in part, to the direct influence of sensationalized around-the-clock detailed media reporting combined with trauma, loss, grief, and a sense of hopelessness and survivor guilt. Those who survive a traumatic incident and watched others suffer, or are exposed to it via media, begin to question why they survived when others did not.

Suicide prevention experts cringe when news sources provide great detail on the who, what, where, when and how of a suicide. The likelihood of another case is high and it will conceivably happen sooner rather than later. We tend to see consecutive suicides that occur among peers who are enduring similar life circumstances as, or live within close proximity to, the individual who died initially. Further, great concern exists for those first responders who were on scene for critical incidents like the shootings at MSD and Sandy Hook, as well as the suicides connected to each.

It’s important how the news portrays suicide. ReportingOnSuicide.org discourages sensationalizing death and avoiding dramatic headlines that draw attention. Media should avoid the use of terms including, “skyrocketing,” “successful” or “unsuccessful” (suicide), or a “failed” attempt. Reporters are also discouraged from interviewing emergency response personnel and reporting as though suicide is a crime.

Media should provide general information rather than sensationalizing, use concrete headlines; if a photo is shown, it should be from work, school, or family; provide suicide prevention hotlines and text/cell phone-based resources; describe suicide as a public health issue; always share information on warning signs and risk factors; use less sensationalized verbiage and accurate data; and if possible, have a suicide expert share correct information regarding warning signs, resources, and best practice.

What experts fear most with each highly publicized suicide and those involving friends or loved ones is a suicide cluster. The truth is, if we do not respond to a suicide death properly, we run the risk of experiencing repeat loss.

The problem is that we leave these communities without resources. Once the cameras leave and the next headline comes out, those who lived through it, were injured by it, or responded to it are left with open wounds that need closed. And most often, they’re left without knowing how they can start to heal.

Fortunately, there are excellent resources available at the national level that are easy to put into practice. Though not widely known, perhaps the best resource is Substance Abuse and Mental Health Services Administration (SAMHSA) SuicideSafe app for medical and behavioral health providers; it has been established that a large number of those who attempted or died by suicide visited either a behavioral health expert, medical doctor or emergency room in the months prior. The app provides educational information, assists in locating nearby services, provides case samples and, most importantly, provides conversation starters for the providers.

Further, those close to an at-risk individual should be sure to have the right conversations and ask the “hard” questions in effort to gauge another’s likelihood of a suicide attempt. The Parkland, Florida, community has begun to recommend the Columbia Lighthouse Project for all parents and caregivers. The approach is based in best practice and is able to help parents gauge if their child is at high risk of suicide. Sadly, it has taken this long for the community to start to get the help it needs. Instead of offering support and resources only for the duration of a shooting and in the immediate aftermath, there need to be dedicated resources even after the cameras stop rolling to ensure better long-term mental health in the wake of tragedies.

Prevention isn’t solely what we do before a death by suicide—it is also linked to "postvention." What we do after a suicide is perhaps one of the best methods of preventing future deaths.

Lisa Pescara-Kovach is an associate professor of educational psychology and director for the Center for Education in Targeted Violence and Suicide at the University of Toledo.