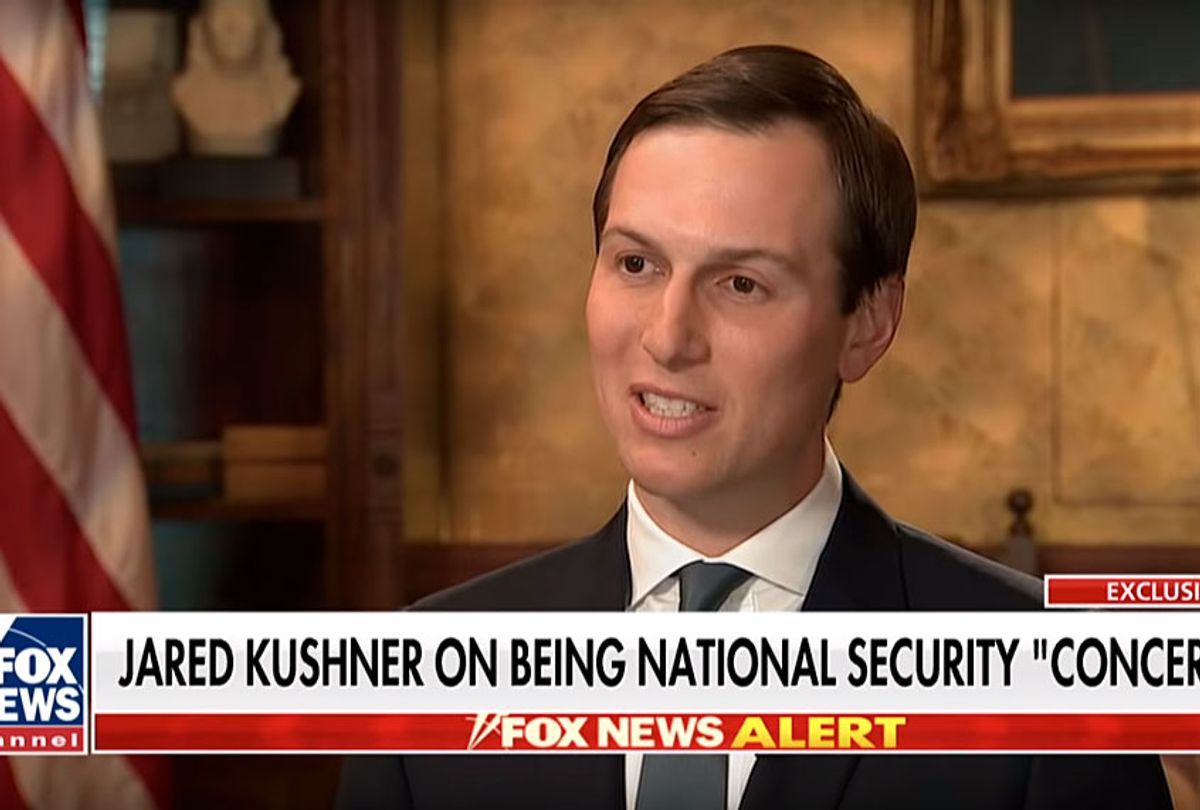 Jared Kushner, the son-in-law of President Donald Trump and one of his senior advisers, dismissed concerns raised by a whistleblower about the White House's security clearance process, saying the president's administration has faced "a lot of crazy accusations" since Trump took office two years ago.

Kushner, a presidential adviser, sat for a rare interview with Fox News host Laura Ingraham following the revelation that Tricia Newbold, a longtime White House security adviser, told a congressional committee that the White House allegedly granted security clearances to at least 25 individuals whose applications had been denied through the usual process.

Newbold, an 18-year veteran of the security clearance process who had served under both Republican and Democratic administrations, told the House Oversight and Reform Committee in a private interview last month that White House security clearance applications "were not always adjudicated in the best interest of national security." She claimed she and her colleagues issued "dozens" of denials for applications, which were later overturned by senior officials, whom, by her account, did not follow the proper protocols meant to mitigate security risks and generally adhered to by previous administrations, the House Oversight panel said in a memo released Monday.

The memo does not identify any of the 25 applicants, although it notes that Newbold told the committee in her interview the individuals included two current senior White House officials, as well as contractors and other employees working for the office of the president.

One of the senior White House officials appears to be the president's son-in-law. Although Newbold did not name the individuals involved, NBC News reported in January that Kushner was granted a security clearance despite expert objections and concerns. And the New York Times reported in February that Trump had instructed his then-chief of staff John Kelly to grant a security clearance to Kushner, even though it was previously denied. (The president has claimed he never interfered in the background check process for Kushner.)

Kushner told Fox News on Monday that he "can't comment for the White House's process."

"But what I can say is that over the last two years that I've been here, I've been accused of all different types of things and all of those things have turned out to be false," he continued. "We've had a lot of crazy accusations – like that we colluded with Russia."

Kushner was referring to the conclusion of an investigation by special counsel Robert Mueller into allegations of collusion between Trump's presidential campaign and Russia during the 2016 election. Attorney General William Barr submitted a four-page summary of Mueller's probe to Congress last week, in which he indicated the special counsel had not found evidence to prove criminal collusion between members of the Trump campaign and Russia during the 2016 election cycle.

The president's senior adviser and son-in-law claimed to Fox News on Monday that the media's obsession to prove a Russia collusion "conspiracy theory" had distracted the nation for two years. Kushner compared the mainstream media's coverage of the special counsel's investigation to their reporting on the 2016 presidential election, claiming the press missed the mark both times.

"Well, look, the media got the election wrong. They thought for sure Hillary Clinton was going to win," Kushner said. "They didn't see what we were seeing out in the country and the field. Their data was wrong, their analysis was wrong and then it happened. Not a single person got fired, not a single person apologized . . . I think people sometimes let their hatred for Trump overtake their rational ability to kind of look at things objectively."

"On the other hand," Kushner added, "You could look at it and say that because the media's been so distracted with Russia, Russia, Russia and all of these crazy conspiracy theories, we've been able to operate underneath that level and just be really effective."

Kushner specifically singled out reporting by CNN, which Trump has consistently slammed as "fake news," for criticism.

"The number of times that CNN wrote things about me that I would then call and say, 'But, that's not true.' [And] they would say, 'Well, we have a source,'" Kushner said. "It is what it is. I just hope that going forward, everyone will look at it and maybe have a little bit of cooler heads and focus that we're all on the same team. We're all here for America."

Kushner also said he would be willing to testify on Capitol Hill on matters related to Mueller's probe, calling the accusations of collusion between the Trump 2016 campaign and Russia "a very serious accusation that goes to the very core of our democracy and that was one [investigation] that we thought it was important to go [along] with, so we were fully compliant."

He also addressed the insistence of some Democratic Party members that evidence of collusion between Trump and Russia exists.

"I wish them luck," Kushner said, "[But] talking about this nonsense further, especially after two years and being wrong so many times is just really not productive and, quite frankly, it's kind of an embarrassment for our democracy."