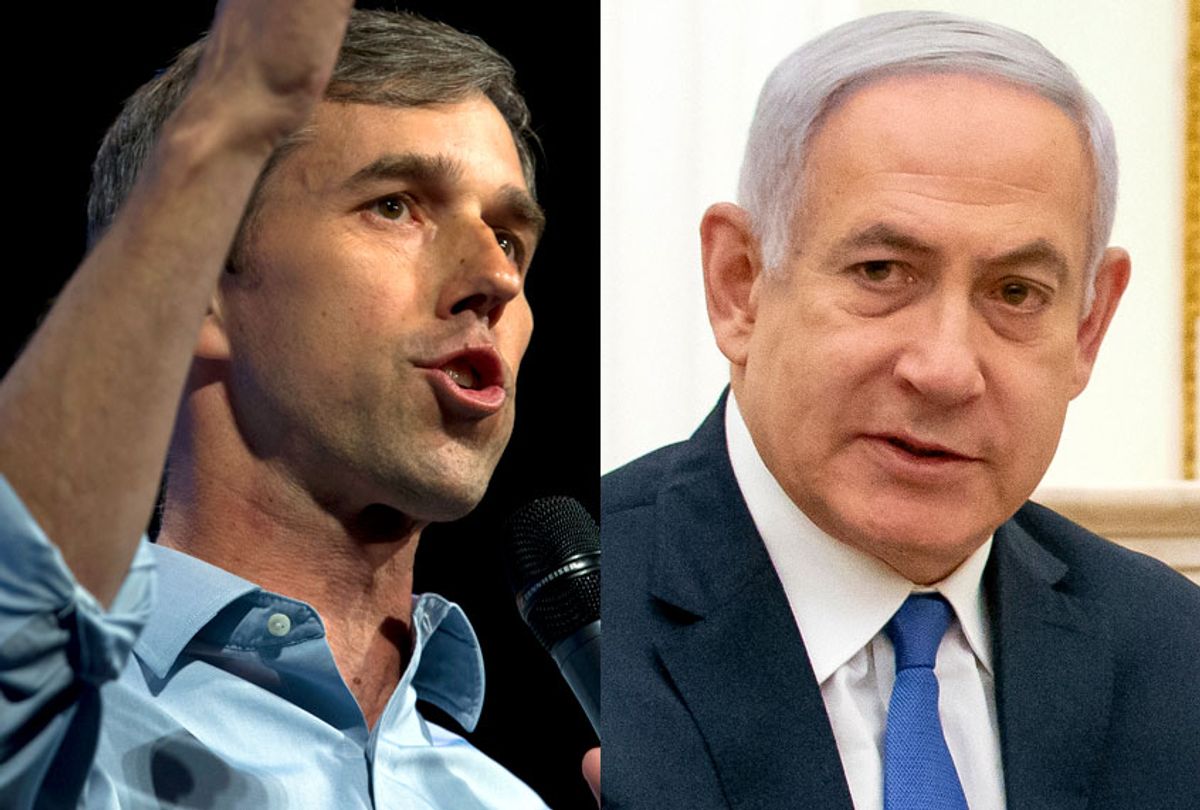 Democratic presidential candidate Beto O'Rourke on Sunday offered sweeping criticism of Israeli Prime Minister Benjamin Netanyahu, calling him a "racist" whose embrace of a far-right government group as part of a last-ditch effort to rally his extremist base and cling onto political power has destroyed any chance of achieving peace in the Middle East.

Speaking at a town hall at the University of Iowa, the former Texas congressman called the U.S.-Israeli relationship one of the most important "on the planet" and drew a distinction between support for Israel and support for Netanyahu.

"That relationship, if it is to be successful, must transcend partisanship in the United States, and it must be able to transcend a prime minister, who is racist as he warns about Arabs coming to the polls, who wants to defy any prospect for peace as he threatens to annex the West Bank and who has sided with a far-right racist party in order to maintain his hold on power," O'Rourke said, referring to Netanyahu seeking to form a majority coalition with the extremist Otzma Yehudit ("Jewish Strength") party.

O'Rourke continued, saying he did not believe Netanyahu, who is facing one of his toughest election challenges as Israelis get ready to go to the polls Tuesday, "represents the true will of the Israeli people; or the best interests of the U.S.-Israel relationship; or any path to peace for the people of the Palestinian Authority, the Gaza Strip and the state of Israel."

He went on to endorse a two-state solution in order to broker peace between Israel and the Palestinians.

"We must be able to transcend his current leadership to make sure that that alliance is strong – that we continue to push for and settle for nothing less than a two-state solution. Because that is the best opportunity for peace for the people of Israel and the people of Palestine," O'Rourke said. "It is the best opportunity for the full human rights of everyone who is living in that region."

His comments came one day after President Donald Trump upped his pro-Israel agenda in a speech before the Republican Jewish Coalition, an influential conservative Jewish group, in Las Vegas. During his remarks, Trump accused Democrats of "advancing by far the most extreme, anti-Semitic agenda in history."

"The Democrats' radical agenda very well could leave Israel out there all by yourselves," Trump declared.

O'Rourke's comments join a larger policy debate taking place across the country and in the Democratic Party about Israel and Netanyahu, whom Trump hosted in the White House just weeks before Israel is set to hold decisive elections, in which Netanyahu seeks to become Israel's longest-serving prime minister.

Trump has sought to seize on the issue, including by spotlighting divisions among Democrats in the House of Representatives over Israel and anti-Semitism, while many Democrats running to challenge him in 2020 distanced themselves from the American Israel Public Affairs Committee (AIPAC), a political group strongly supportive of Netanyahu.

He reversed longstanding U.S. policy in March by announcing the administration's support for Israel's claim to sovereignty over the Golan Heights, the contested territory that Israel seized from Syria during the Six-Day War in 1967 and formally annexed in 1981, handing Netanyahu a major victory in the run-up to the upcoming election.

Trump told his Las Vegas audience on Saturday that he had stood with "your prime minister," referring to Netanyahu.

The Trump administration is reportedly delaying the release of its long-awaited Middle East peace plan until after Israel's general election on April 9, which will spare Netanyahu from having to go on record about policy positions sure to divide his base as he seeks re-election.