The floor action is the second such rebuke in recent weeks of Omar, whose remarks spurred claims of anti-Semitism 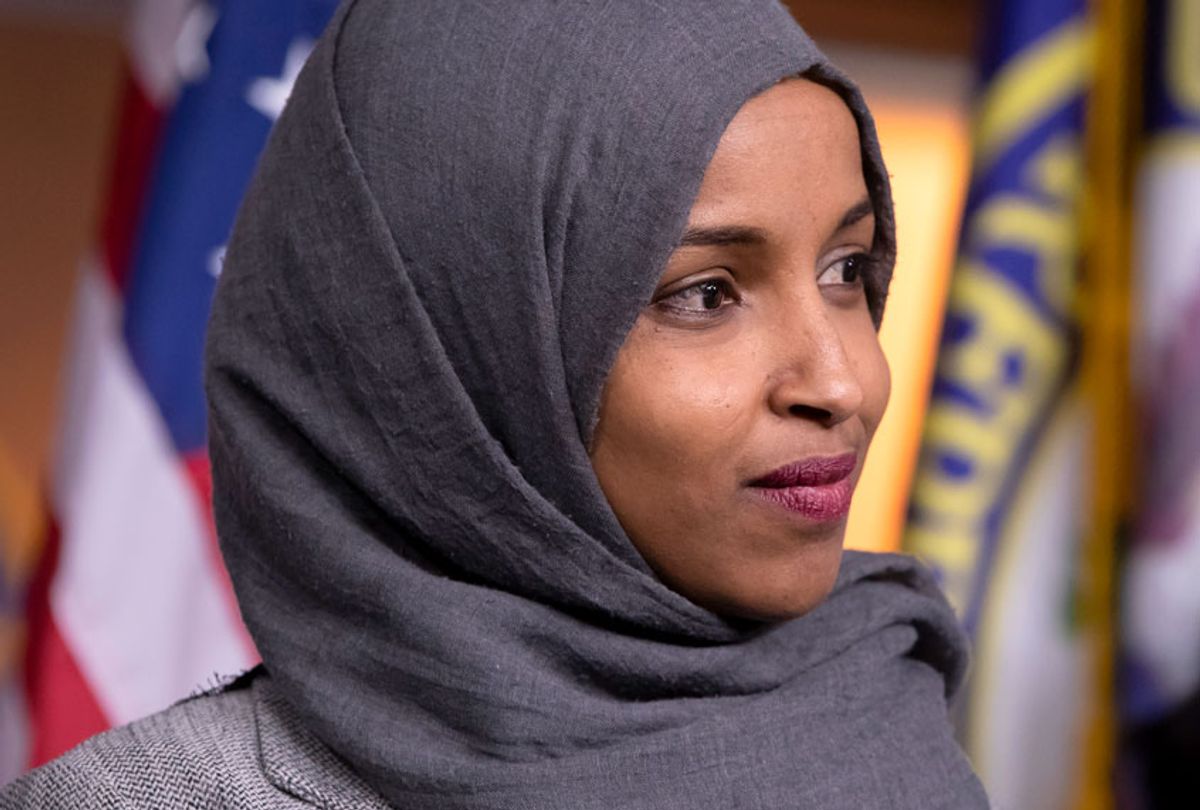 The floor action is the second such rebuke in recent weeks of the freshman congresswoman, who this year became the first Somali-American and joined Rep. Rashida Tlaib, D-Mich., as the first Muslim women to serve in the Congress. Omar has come under intense scrutiny for saying at a Washington bookstore forum last week that pro-Israel advocates are pushing "allegiance to a foreign country."

Pelosi and other senior Democrats have drafted a resolution to address the controversy, which intensified over the weekend following a dramatic clash between Omar and senior Jewish lawmakers. The four-page measure, drafted by Pelosi, Majority Leader Steny Hoyer, D-Md., Foreign Affairs Committee Chairman Eliot Engel, D-N.Y., and Rep. Ted Deutch, D-Fla., details the history and recent rise of anti-Semitism in the U.S. as a whole without calling out Omar by name, an issue which Politico reported has prompted an internal dispute among Democrats.

If the Democratic-controlled House proceeds with the vote on Wednesday as planned, it would be an unprecedented public admonishment of Omar, who was sworn into office just two months ago, that reveals how seriously Democratic leaders view this controversy. However, these efforts by Pelosi and other Democratic leaders against a member of their own party might not be enough for Republicans, who, according to Politico, believe Omar's comments warrant a more severe punishment. The news outlet reported that House Minority Leader Kevin McCarthy, R-Calif., and other top Republicans are considering a censure motion against Omar. Politico noted, "Republicans may also formally demand that Democrats strip Omar of her seat on the Foreign Affairs Committee – a move that Pelosi and other senior Democrats won't take at this point."

Nearly a dozen pro-Israel groups also called on Pelosi to remove Omar from her spot on the House Foreign Affairs Committee. Engel, the chairman of that committee, accused Omar of invoking a "vile anti-Semitic slur," but did not call for her to be removed from the committee. Rep. Juan Vargas, D-Calif., who sits on the panel, tweeted that Omar should apologize for "hurtful anti-Semitic stereotypes."

"Questioning support for the U.S.-Israel relationship is unacceptable," Vargas wrote.

"Resolutions are all well and good, but Speaker Pelosi is clearly afraid to stand up to Rep. Omar if she continues to reward her with a plum spot on the Foreign Affairs Committee," House Minority Whip Steve Scalise (R-La.) wrote on Twitter Monday.

The Anti-Defamation League, a non-profit that tracks and exposes anti-Semitism, wrote a letter to Pelosi on Monday requesting a House resolution to reject what the organization called Omar's "latest slur."

"We urge you and your colleagues to send the unambiguous message that the United States Congress is no place for hate," the group's CEO, Jonathan Greenblatt, wrote in a letter.

In recent days, Omar has also been on the receiving end of anti-Muslim attacks. On Friday, an Islamophobic poster linking Omar to the Sept. 11 terrorist attacks was displayed at an event sponsored by the West Virginia Republican Party. The poster included a photo of the burning World Trade Center and a photo of the Muslim congresswoman below it.

Omar, meanwhile, has received support from prominent progressive lawmakers, including Rep. Ocasio-Cortez, D-N.Y., and Tlaib, who is the first Palestinian-American woman elected to Congress. The freshman congresswoman has spoken out against her Democratic colleagues who have failed to come to her defense even as she faced mounting criticism.

"I am told everyday that I am anti-American if I am not pro-Israel. I find that to be problematic and I am not alone. I just happen to be willing to speak up on it and open myself to attacks," Omar tweeted Sunday, referring to her public opposition to Israeli policies — from West Bank settlements to the lobbying influence of AIPAC.

Omar last month criticized the political influence of AIPAC, when she tweeted the phrase, "It's all about the Benjamins baby." Her comments were criticized by many lawmakers on Capitol Hill; and while Omar apologized for her comments, House Republicans still passed a resolution condemning anti-Semitism without specifically naming Omar. The House overwhelmingly approved the measure with 424 votes, including winning Omar's vote.