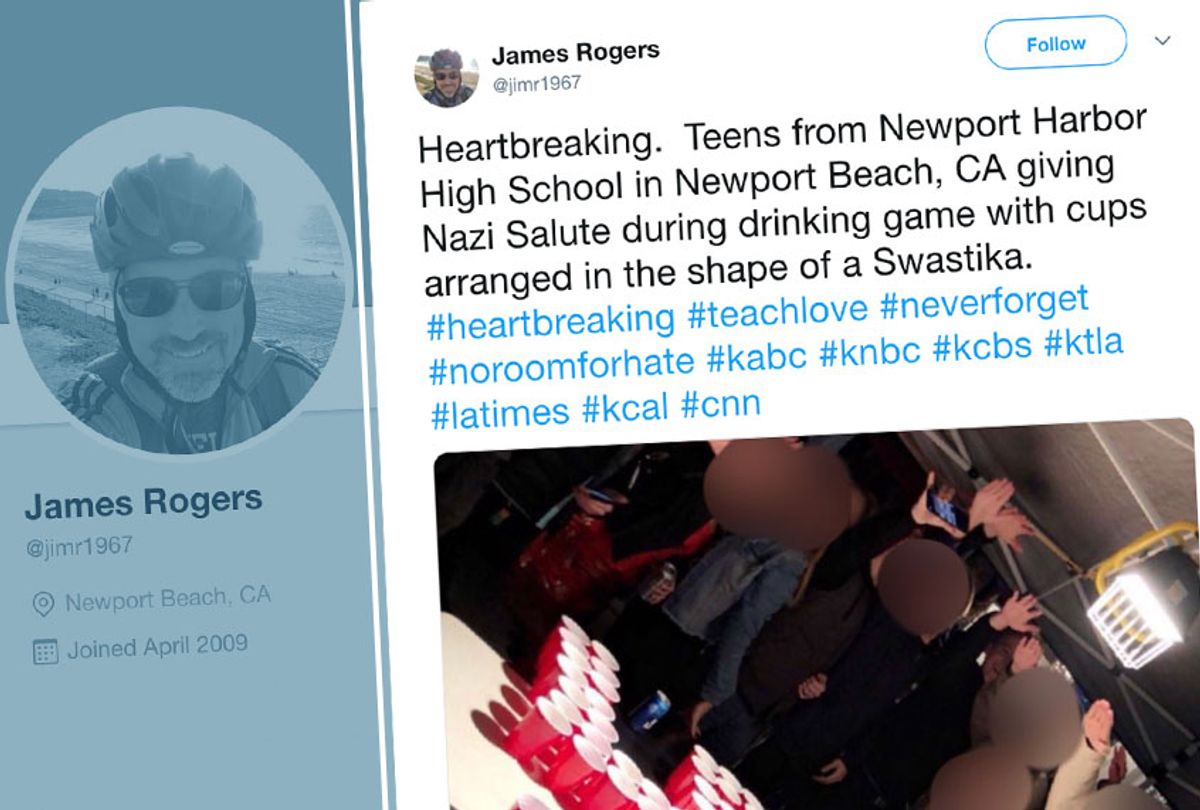 A photo of a group of smiling students giving a Nazi salute surrounding a swastika formed by red plastic cups posted on social media sent shockwaves through a California community, Jewish leaders and others on Sunday.

The incident, which occurred in Newport Beach, reportedly occurred at an off-campus party that was not authorized by the school, Newport-Mesa school board President Charlene Metoyer said, according to the Orange County Register.

"I was simply devastated to see that," Metoyer reportedly said of the photo. "As a school board, we're not only concerned by the underage drinking but also the mental health of the students who participated in this horrendous act and all their fellow students who will be affected by it. This is appalling to not just our Jewish student community but to all of us who care about human rights."

The district and school administrations, along with a crisis team, met on Sunday to determine "next steps" and consider disciplinary actions against the students who were involved, the OCR reported.

The incident in southern California is the latest example of the biggest spike in anti-Semitism across the country in nearly 40 years, according to data collected by the Anti-Defamation League. The non-profit, which tracks and exposes anti-Semitism, said anti-Semitic hate crimes increased by 58 percent from 2016 to 2017 — the largest single-year increase on record and the second highest number reported since ADL started collecting such data in 1979. A significant portion of those incidents were documented in schools and on college campuses and nearly doubled for a second year in a row, according to ADL.

The ADL called the deadly white supremacist rally in Charlottesville, Va., in Aug. 2017 "one of the most disturbing recent manifestations of anti-Semitism in the U.S." At the time, white nationalists and neo-Nazis marched on the University of Virginia's campus while carrying tiki torches and chanting, "Jews will not replace us."

The nation was shaken up again in October by the shooting at the Tree of Life synagogue in Pittsburgh, Pa., when a gunman stormed into the place of worship on Sabbath morning and shot and killed 11 worshippers as he shouted out anti-Semitic slurs. The rampage has been described as among the deadliest against the Jewish community in the U.S.

The shooting at the Pennsylvania congregation came just days after George Soros, the billionaire philanthropist and major Democratic donor, who is Jewish, received a pipe bomb in the mail. That same week, a Senate campaign sign for Josh Hawley, then-attorney general of Missouri, was sprayed with a swastika.

In November, a Wisconsin school district announced that it is investigating a large group of male high school students giving what appears to be the Nazi salute in their junior prom photos. The salute, formally known as the Sieg Heil, was used by Nazi soldiers to signal obedience to Adolf Hitler. At the time, Democratic Sen. Jon Erpenbach of Wisconsin said he blamed President Donald Trump for creating an atmosphere where such behavior is encouraged.

"There's no room in the world for anything like that at all," Erpenbach said. "From what they're seeing out of the White House – that it's OK to be intolerant and racist. Never is. Never was. Never will be."

Throughout his tenure in the White House, Trump has been repeatedly criticized for spewing hateful and racist rhetoric against minority groups.