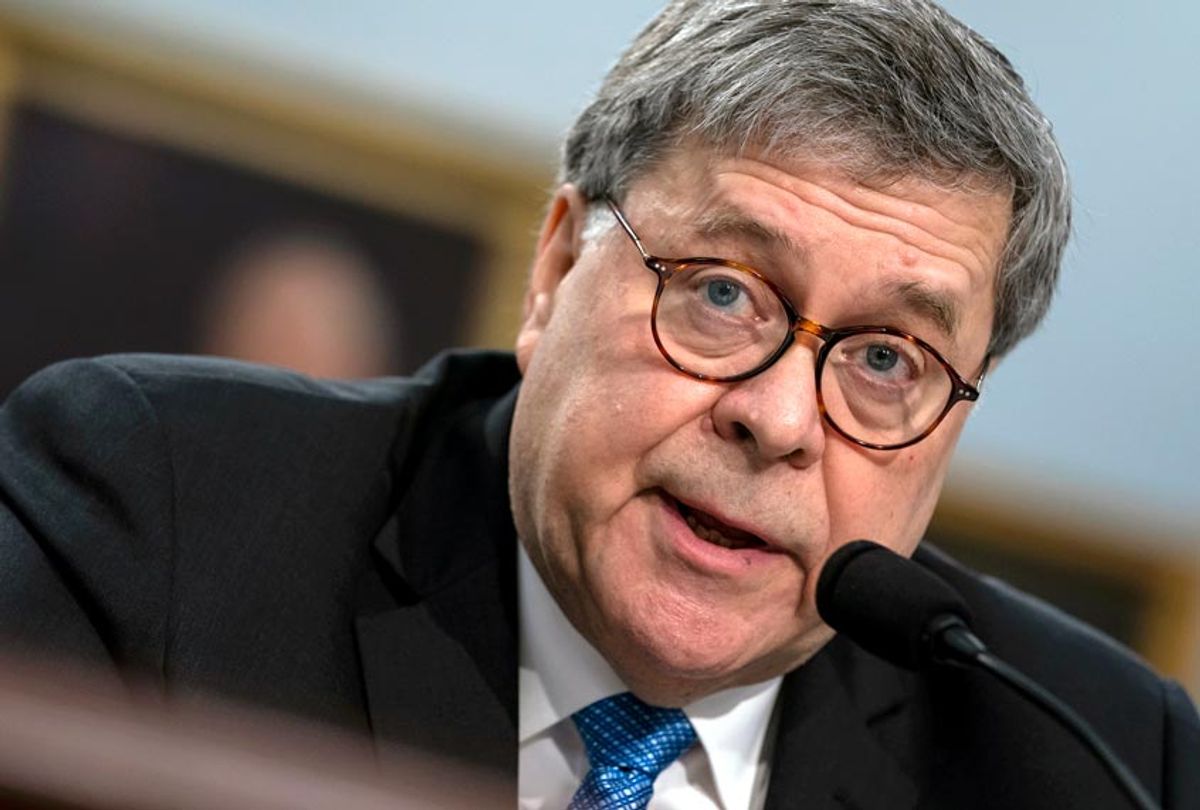 "My original timetable of being able to release this by mid-April stands. So I think that from my standpoint, by within a week, I will be in a position to release the report to the public," Barr told lawmakers Tuesday during a congressional hearing on the Department of Justice's budget.

The attorney general's comments marked the first time he testified publicly before Congress since releasing a four-page summary of Mueller's report into whether President Donald Trump's 2016 campaign colluded with Russia to influence the outcome of the election, and whether the president himself obstructed the investigation, last month. Barr appeared before the House Appropriations subcommittee, which overseas funding for the Commerce and Justice Departments, as well as for science-related agencies.

Barr, who was expected to face tough questions about his handling of Mueller's report from the Democratic-controlled panel, told lawmakers a redacted version of the report would be released, directly clashing with Democratic demands that he turn over the report "in complete and unredacted form" along with underlying evidence and material to Congress.

Still, Barr said he would not give in to requests from Democrats that he provide a copy of Mueller's entire report without redactions to Congress, arguing he cannot legally release evidence collected by the grand jury. He also does not intend to ask the judge presiding over Mueller's grand jury to permit the release.

"I don't intend at this stage to send the full, unredacted report to the committee," Barr said, noting Rep. Jerry Nadler, D-N.Y., chairman of the House Judiciary Committee, could make that request himself.

Nadler has threatened to subpoena the Justice Department to release Mueller's report and related documents, if he and Barr can't come to an agreement over redactions and the special counsel's underlying evidence. Democrats on the House Judiciary Committee voted last week to authorize a subpoena for Mueller's full report and evidence, and Nadler said he is waiting to see what Barr turns over before moving forward.

Barr, during his testimony, demurred when asked if the White House had seen or been briefed on the report, saying "I'm not going to say anything more about it."

Barr, in his opening statement, did not mention the Mueller report. Instead, he touched on the opioid crisis, immigration and cyber crime. The attorney general attempted to keep the conversation focused on the Justice Department's proposed $29.2 billion budget, which includes funding for 100 new immigration judges as Trump hardens his position on immigration along the U.S.-Mexico border.

Mueller announced the completion of his investigation into the president's campaign and foreign election interference late last month. Barr submitted a four-page summary of Mueller's report to Congress, in which he indicated the special counsel had not found evidence of criminal collusion or conspiracy between Trump's presidential campaign and Russia during the 2016 election cycle. Barr noted in his summary that while Mueller's report "does not conclude that the president committed a crime, it also does not exonerate him." Still, Trump has appeared to celebrate Barr's review, claiming it to be a "total and complete exoneration."

Democrats, meanwhile, have dismissed Barr's summary of Mueller's report, arguing it is both incomplete and insufficient. They have zeroed in on Mueller's decision to punt on whether Trump had obstructed justice, which Barr said "leaves it to the attorney general to determine." Barr said he and Deputy Attorney General Rod Rosenstein concluded Mueller's findings were "not sufficient to establish that the president had committed an obstruction-of-justice offense," which Democrats say warrants further examination and the release of the full report.

Barr is not required by the regulations governing the special counsel to notify Congress of more than "brief notifications, with an outline of the actions and the reasons for them." His four-page overview of Mueller's report dealt a blow to Democrats, who had hoped the special counsel's account of his wide-ranging probe into the president's campaign and election meddling would bolster their wide-ranging investigations into Trump and his business dealings.

"I have said, and I'll say again, 'No thank you, Mr. Attorney General. We do not need your interpretation. Show us the report and we can draw our own conclusions. We don't need you interpreting for us,'" Pelosi said at a recent news conference. "It was condescending, it was arrogant and it wasn't the right thing to do. The sooner they can give us the information, the sooner we can all make a judgment about it."

Barr is scheduled to return to Capitol Hill on May 1 and May 2 for hearings specifically about the Mueller investigations. He will appear before the House and Senate Judiciary Committees.