Do Democrats want a woman in 2020? No idea — but your Twitter feed doesn't know either

There are powerful arguments for Democrats to pick a woman, or so we thought. What if voters simply don't care? 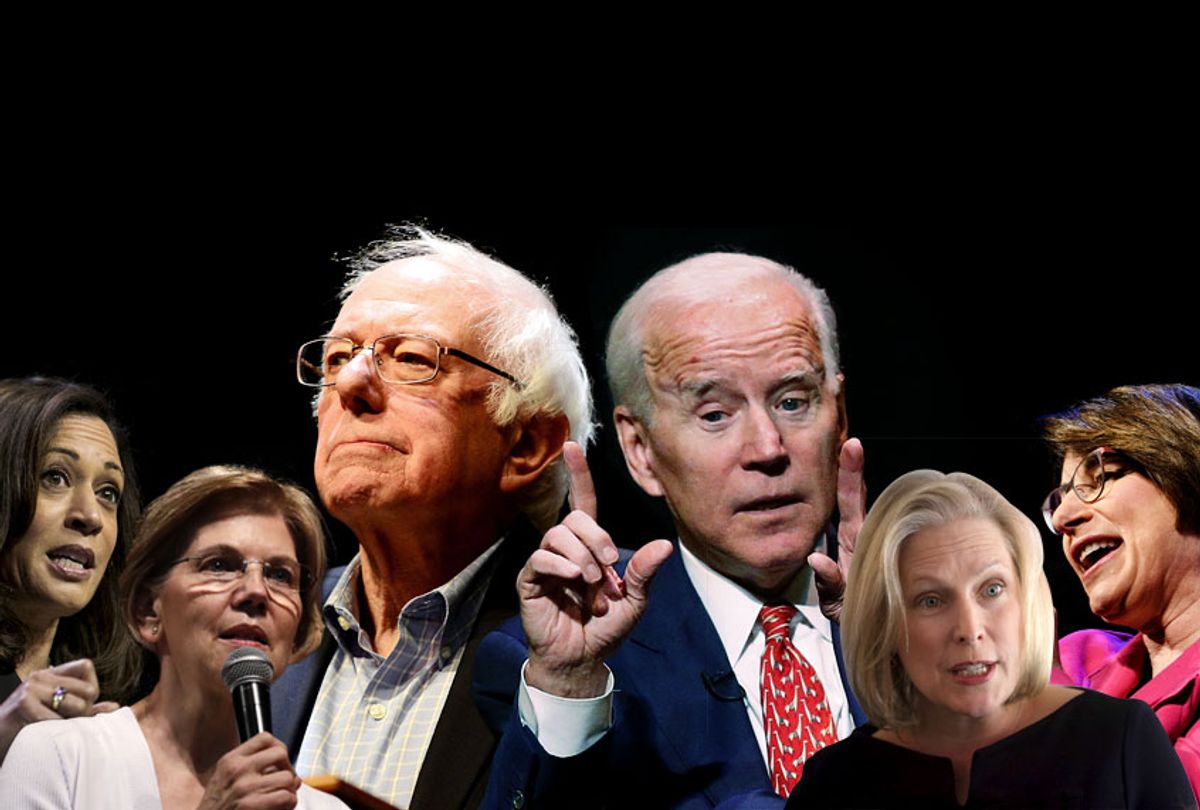 If you’re watching the nascent 2020 Democratic primary campaign as it unfolds on ProgressoTwitter -- meaning the social media realm of activists, operatives and journalists on the leftward half of the spectrum -- you might have the justifiable impression that there is a groundswell of support for a female nominee, and Democrats simply need to decide which of the competent and qualified women running for president can best answer the call. (Spoiler alert: It probably isn’t Rep. Tulsi Gabbard of Hawaii, arguably the outlier-est of all 2020 candidates.)

So far there isn’t much evidence to support that hypothesis, I will suggest mildly. It may turn out to be one of those self-reinforcing, hall-of-mirrors opinions, greatly amplified by the internet. I believed it myself until recently, and the current "Old School" state of the Democratic pre-race is as much of a surprise to me as to anybody. Of course, a few weeks ago your Twitter feed might have informed you, in a different register, that Nancy Pelosi’s quest to reclaim the speaker’s gavel in the House of Representatives was doomed, and that an insurgent coalition of progressives and/or conservatives in the Democratic caucus was about to chuck her out.

(Let’s pass over the question, for the moment, of whether you believed, based on the Twitter hive-mind of the center-left, that Robert Mueller was likely to indict not just President Trump but virtually everyone in his inner circle, leaving every elected Republican to wear sackcloth and ashes like a medieval penitent and -- just possibly, or maybe, or almost certainly -- elevating the aforementioned Nancy Pelosi to the presidency after Trump and Mike Pence were forced to resign, impeached and drawn-and-quartered, all on the same day.)

Returning to the not-yet 2020 campaign, you also might get the general idea that this collective hunger for gender justice and for the symbolic breakthrough that didn’t quite happen in 2016 is being squelched or suppressed by unclear forces: armies of BernieBros or the Democratic Party leadership or the overt sexist snark and unconscious gender bias of the mainstream media. I’ve encountered the argument several times now (often from people I like and respect) that if the white men who are already running for president or contemplating doing so really cared about women’s equality, and about standing up to the repulsive sexism of Donald Trump, they’d get out of the way and clear the field for a female nominee.

That may sound, at first, like a forceful attack on Joe Biden and Bernie Sanders and Beto O’Rourke (and whoever else) for clinging to the dismal Great Man politics of the past and standing in the way of a transformative historical moment. But it doesn’t really have anything to do with them, and it’s an argument based on weakness, not on strength. What it amounts to, in plain English, is the idea that we can’t trust actual Democratic voters to do the right thing because they’re too dumb or too fearful or too un-woke. So we need to leave them no choice and drag them headlong into the future, like a recalcitrant goat at the end of a rope.

That’s less mendacious, I believe, than the elaborate con game Republican elites ran on their voters for decades, until it finally blew up in their faces. But it's in the ballpark. To be clear, that sense of frustration or bafflement with the electorate is understandable. Nobody ever went broke betting on Democratic primary voters’ exaggerated caution, or their appetite for the safe, moderate, “electable” choice who turns out, when faced with an actual Republican, not to be as electable as all that.

I’m already on record arguing that it wasn’t a great idea for either Biden or Sanders to run in 2020. Apparently they didn't listen. While I don’t personally hold their whiteness or maleness against them, that’s clearly part of the equation that makes them seem like weird choices for the Democratic Party at this point in its history. Or rather, it makes them seem like weird choices to people who think approximately the same things I think, which is precisely where the problem lies.

I pretty much bought into the conventional wisdom coming out of the 2018 “blue wave”: Women had turned out across the country in large numbers, electing the youngest, most diverse and most female congressional majority in history. With an unprecedented number of qualified and experienced women running for president, it seemed logical, even inevitable, that a similar wave of female voters would embrace the chance to repudiate Trump and shape history.

Nobody can say for sure that won’t happen. Polls at this stage are measurements of name recognition more than anything else: Joe Biden and Bernie Sanders are a whole lot better known than Kirsten Gillibrand and Amy Klobuchar. Once the top eight or so candidates start appearing on debate stages together this summer, the picture will become a lot more dynamic. There’s no telling who will win the Democratic nomination -- although we could make a solid list of 10 or so people who definitely won’t.

That said, it’s also a mistake to assume that early polling tells us nothing whatever. As I heard someone observe recently, most coverage of the Republican field back in 2015 was based on the premise that the unlikely person who was leading in the polls was a hilarious illusion, and would soon surrender to political reality. Instead, “political reality” turned out to be the illusion. What the polls tell us right now is that Democratic voters are overwhelmingly interested in identifying a candidate who can beat Donald Trump. That part is unlikely to change, and to this point most of them -- men and women alike -- are inclined to believe that’s one of two white guys in their 70s.

The best available recent survey with lots of demographic tabulation, taken by Quinnipiac University in mid-March, definitely shows a gender split among Democratic voters. It’s just not big enough to make any real difference. Almost one-third of female voters say they’d prefer to vote for a woman, versus only 17 percent of men, but large majorities of both genders say it doesn’t matter.

Biden and Sanders both poll slightly worse among women than men, but remain the first and second choices by a significant margin. Sen. Kamala Harris polls much better among women than men, which could end up being an important factor. For now, that only puts her in a third-place tie with Beto O’Rourke among female voters, at 11 percent. Elizabeth Warren's support shows no gender split at all, and Klobuchar and Gillibrand's numbers are so close to zero that you simply can't tell.

We can say that such polls don’t tell us what will happen, which is true. We can say that Democrats’ long-established yearning for the middle-road white guy has little or no empirical backing. As Salon’s Amanda Marcotte recently argued, that’s true too. We can say that many feminists who thought they would see a woman elected president in 2008, and were almost certain they would in 2016, are beginning to feel a creeping dread that their cause is cursed and it will never actually happen. I don't know whether they're right about the curse, but the anguish is real.

We can say there is still a long-running drama to be cast and roles to be played -- Pete Buttigieg is currently auditioning for the role of “plain-spoken heartland outsider,” previously played by John Kasich -- and that most voters, as ever, will make snap judgments based on semiotic or psychological factors rather than rational considerations of ideology or policy or history.

We can say that we should have gotten it through our thick skulls by now that conventional wisdom is useless, even when it's the brand new conventional wisdom we just invented. And we can say for absolute certain that many or most of us live in a media economy built on confirmation bias, where we surround ourselves with arguments we wish were true and then conclude that they must be.