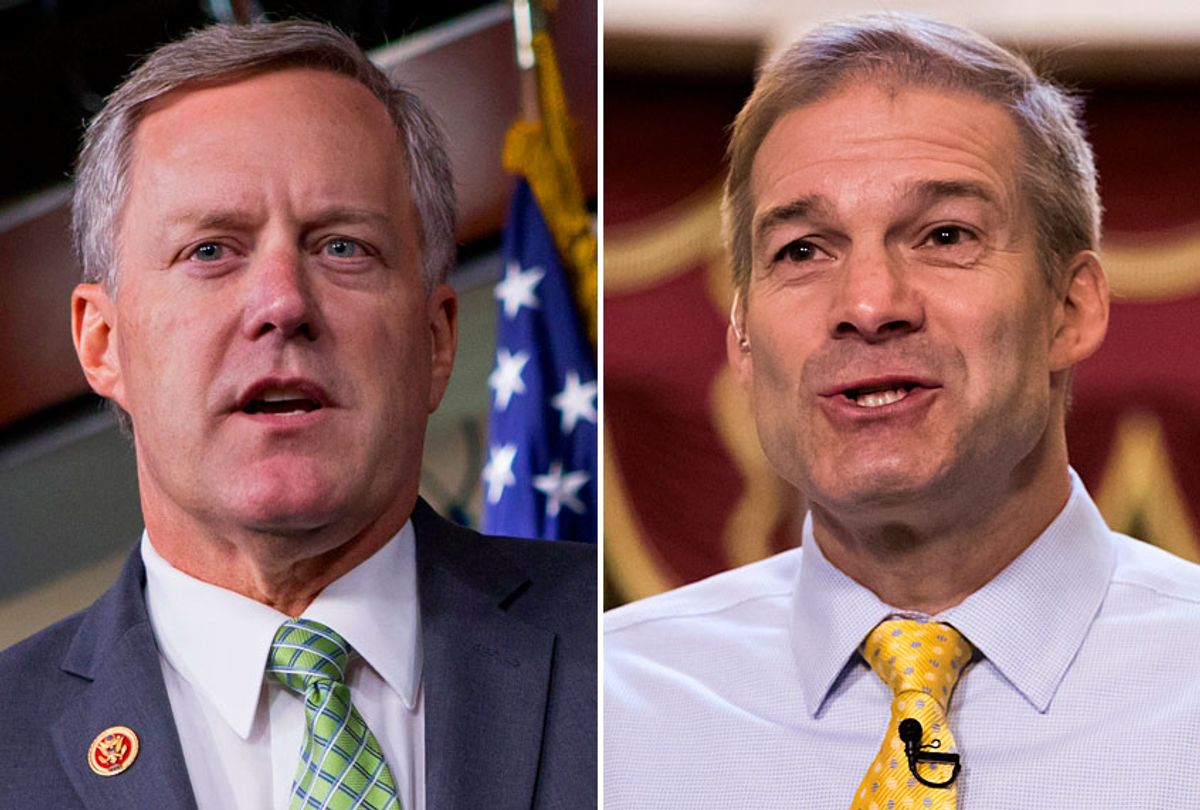 Two prominent Republican members of the House Freedom Caucus warned pharmaceutical companies not to cooperate with a House probe into their drug pricing.

Rep. Jim Jordan of Ohio and Rep. Mark Meadows of North Carolina, who both sit on the House Oversight Committee, sent letters to the CEOs of 12 pharmaceutical companies, including Pfizer and Johnson & Johnson, to warn them against complying with their own panel’s investigation into how the industry sets its drug prices, BuzzFeed News reported.

Meadows and Jordan warned that committee chairman Rep. Elijah Cummings, D-Md., may leak damaging information about the companies in an effort to bring down the industry’s stock prices.

“Whatever you all give us, we will give it back in savings by rooting out fraud, waste and abuse,” he added.

Meadows and Jordan warned that Cummings was “seeking a wide range of highly sensitive business-proprietary information that would likely harm the competitiveness of your company if disclosed publicly.”

They went on to accuse Cummings of “releasing cherry-picked excerpts from a highly sensitive closed-door interview” conducted in the committee’s probe of White House security clearances.

“This is not the first time he has released sensitive information unilaterally,” they wrote.

Cummings responded to the letter by accusing the Republicans of working to protect Big Pharma instead of Americans who rely on their prescription drugs.

“Rep. Jordan is on the absolute wrong side here,” Cummings told BuzzFeed News. “He would rather protect drug company ‘stock prices’ than the interests of the American people.”

Cummings launched the probe in January. As part of the investigation he requested "information and communications on price increases, investments in research and development, and corporate strategies to preserve market share and pricing power" from a dozen pharmaceutical giants.

Americans pay shockingly high costs for drugs compared to the rest of the world. The prices for the 20 top-selling drugs are three times higher in the United States, on average, than the same drugs in the United Kingdom, Reuters reported, noting that U.S. prices for top brand-name drugs skyrocketed by 127 percent between 2008 and 2014. This year drug prices increased by an average of 6.3 percent, the Wall Street Journal reported. The average American spends $1,200 on prescription drugs each year, according to the Organization for Economic Cooperation and Development.

While drug companies often claim that prices are marked up because of the high cost of research and development, that does not explain why the same drugs cost 300 percent more in the U.S. compared to other countries. A study published in Health Affairs found that costs have gone up because companies keep raising the price of drugs that are already available rather than new products.

“We found that, in the case of brand-name drugs, rising prices were driven by manufacturers increasing prices of medications that are already in the market rather than [by] the entry of new products,” the study’s lead author, Inmaculada Hernandez, told CNBC.

These unrelenting price increases have caused Americans to skip potentially life-saving medication to save money. A 2016 survey found that 14 percent of insured adults reported not refilling a prescription or skipping doses because of the cost.