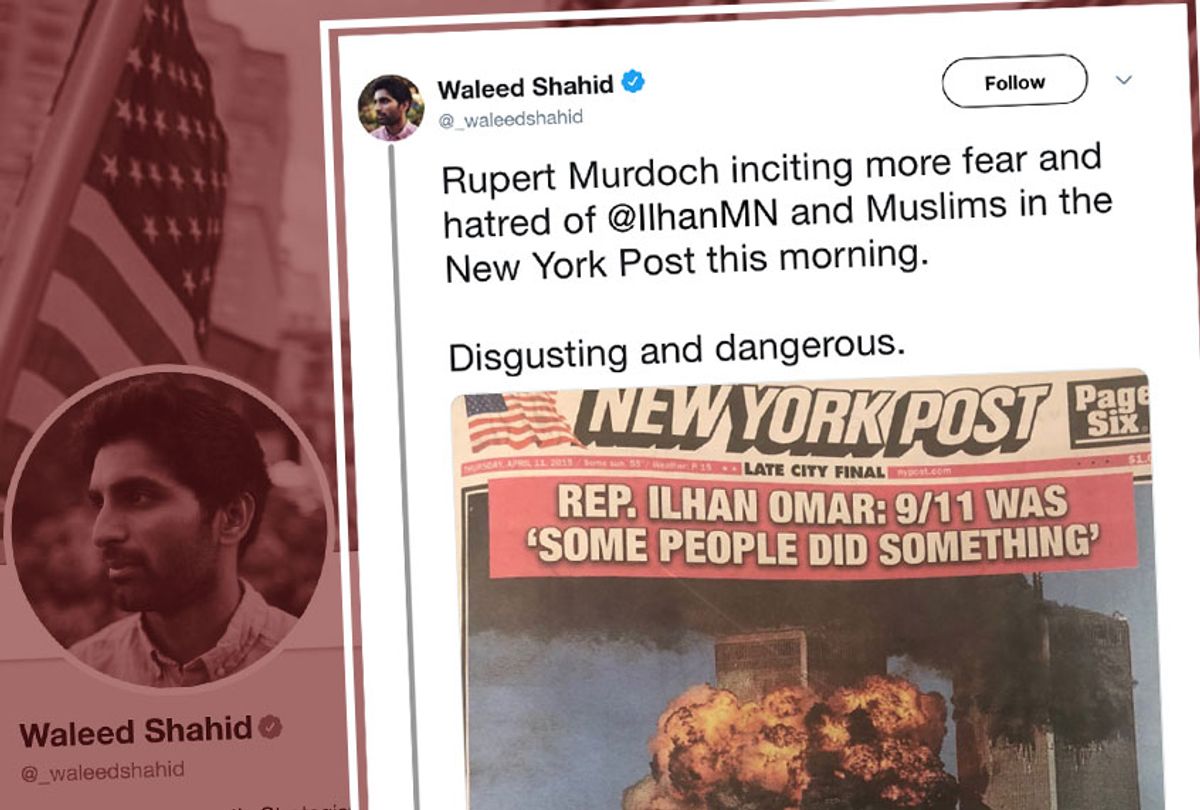 The New York Post has joined in on the sustained onslaught of Islamophobia directed at Rep. Ilhan Omar, D-Minn., in recent days from key figures in the Republican Party and the media empire of billionaire Rupert Murdoch.

Thursday's cover of the New York tabloid showed a photograph of the World Trade Center exploding. At the top of the page, Omar was quoted out-of-context as saying, "Some people did something."

“Here’s your something: 2,977 people dead by terrorism," read the coverline. An accompanying article criticized Omar's comments as "referring dismissively to the terrorist attacks."

The president's eldest son, Donald Trump Jr., posted the tabloid's cover to his Instagram, where he circled Omar's quote in red.

"What a disgrace that this anti-Semite is in Congress and actually gets to make decisions for Americans," the Republican wrote. "That she would liken 911 to 'some people did something' tells you all you need to know about her and what she thinks of America."

"As an American and a New Yorker I couldn’t be more offended by this bullsh*t, but of course Chuck Schumer, Nancy Pelosi and their band of liberal clowns will do nothing," he continued. "And the media will try to make her some sort of hero to cover her hatred of this great country and it’s people."

In the clip from a speech to Council on American-Islamic Relations, Omar said that "for far too long, we have lived with the discomfort of being a second-class citizen. And, frankly, I'm tired of it. And every single Muslim in this country should be tired of it. CAIR was founded after 9/11, because they recognized that some people did something and that all of us were starting to lose access to our civil liberties." (CAIR was in fact founded in 1994, although it racheted up its activities after 9/11.)

Democrats were quick to rush to Omar's support following the circulation of Thursday's Post, casting blame directly at Murdoch.

Waleed Shahid, a senior Democratic strategist, tweeted his disdain for the cover story, writing, "Rupert Murdoch inciting more fear and hatred of @IlhanMN and Muslims in the New York Post this morning. Disgusting and dangerous."

In a separate tweet, he added: "Fox News + The New York Post are owned by Rupert Murdoch who wants white people to fear @IlhanMN, @AOC, and people of color so much that we never come together to tax billionaires like him. Murdoch drives up hate, so people like him can thrive off our divisions. Divide and rule."

Rep. Rashida Tlaib, D-Mich., said the New York Post knew "exactly" what it was doing, which she described as "taking quotes out of context and evoking painful imagery to spread hate and endangering the life of Rep. Omar. "

"Shame on them," the congresswoman added on Twitter. "And shame on Rupert Murdoch."

"The New York Post and Fox News are owned by a racist billionaire, Rupert Murdoch, who knows exactly what he's doing," the left-leaning group tweeted. "Murdoch is part of a billionaire class that wants to divide and conquer America through hate and fear. @IlhanMN and all Americans deserve not to live in fear."

For her part, Ocasio-Cortez, who joins Omar and Tlaib in the freshman class of the most diverse Congress ever, refused to acknowledge the content of the Post's cover.

"I’m not going to quote the NY Post’s horrifying, hateful cover. Here’s 1 fact: @IlhanMN is a cosponsor of the 9/11 Victim Compensation Fund," Ocasio-Cortez wrote on Twitter. "She‘s done more for 9/11 families than the GOP who won’t even support healthcare for 1st responders- yet are happy to weaponize her faith."

Thursday's Post cover comes in the wake of a much-derided "Fox & Friends" segment, in which co-host Brian Kilmeade appeared to suggest Omar had a dual loyalty. "You have to wonder if she's an American first," he asked viewers.

Kilmeade later added, "She should use this opportunity as a Muslim leader not to dismiss a Muslim attack — a Muslim extremist attack."

The Fox News host reacted to the controversy that ensued by saying he had not intended to question whether Rep. Omar was an American.

"I am questioning how any American, let alone a United States Congresswoman, could downplay the 9/11 attacks," Kilmeade later tweeted.

The editorial content from both Fox News and the Post echoed talking points tweeted Wednesday by Ronna McDaniel, the current chairwoman of the Republican National Committee.

"Ilhan Omar isn’t just anti-Semitic – she’s anti-American. Nearly 3,000 Americans lost their lives to Islamic terrorists on 9/11, yet Omar diminishes it as: 'Some people did something,'" McDaniel claimed on Twitter. "Democrat leaders need to condemn her brazen display of disrespect."