"Hellboy" without Guillermo del Toro is a waste: All muscle, no beauty or heart 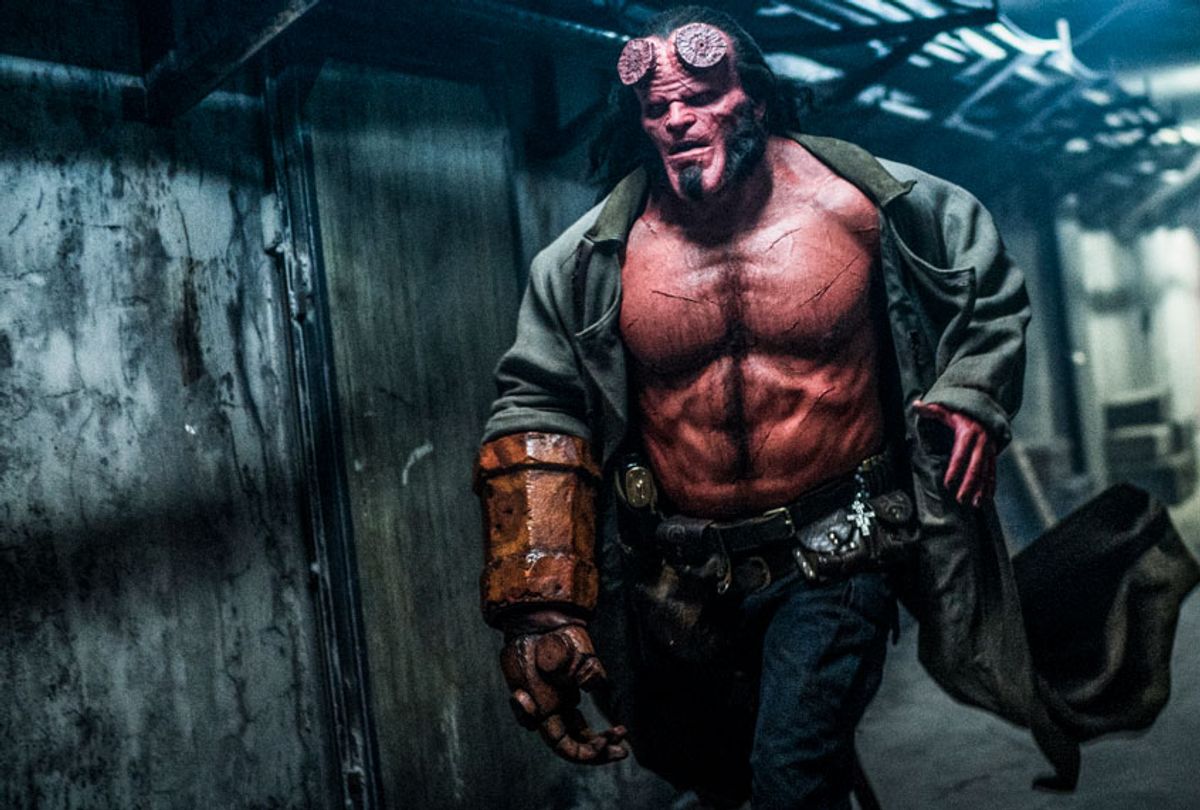 Watching the "Hellboy" reboot is like eating a rice cake — you don't feel bad afterward, but at the same time you're not entirely sure you really experienced anything at all.

This is not the reaction that one should have after seeing a movie with a title like "Hellboy." It certainly wasn't the impact left by the two previous movies starring this character, Guillermo del Toro's 2004 masterpiece "Hellboy" and its worthy follow up in 2008, "Hellboy II: The Golden Army." While the plots of those films could feel overwrought and absurd, those qualities almost worked to the films' favor. Thanks to del Toro's direction and writing and Ron Perlman's iconic performance in the titular role, the original "Hellboy" movies were visually stunning and were suffused in a moody, gothic tone that made them feel more like horror or fantasy epics than traditional superhero flicks.

The "Hellboy" reboot, by contrast, treats this material as if it was trying to become an entry in the Marvel Cinematic or DC Extended Universes (the "Hellboy" property originated with Dark Horse Comics). As a result, the movie contains all of the elements of the originals that were mediocre — namely, the plot and backstory — with none of the style and artistry that made them distinctive.

And what is that story? Hellboy/Anung Un Rama (David Harbour, who also stars in Netflix's "Stranger Things" as Sheriff Hopper) is a Cambion who was summoned by Nazis during World War II but got captured by Trevor Bruttenholm (Ian McShane) before they could implement their evil plan with him. Instead of killing Hellboy, Bruttenholm decides to raise him to fight other supernatural monsters as an agent of the Bureau for Paranormal Research and Defense (B.R.P.D.). One of those creatures is Nimue the Blood Queen (Milla Jovovich), who was killed and had her remains scattered throughout England by King Arthur in order to thwart her dreams of world domination. Joining Hellboy in his fight against Nimue are Alice Monaghan (Sasha Lane), an Irish woman whom Hellboy rescued from fairies when she was a baby and can speak with the dead as a result, and Ben Daimio (Daniel Dae Kim), a soldier who can turn into a jaguar when he feels anger or pain.

That's about it in terms of plot. There is an implied romance at times between Hellboy and Alice, although that is never explored beyond occasions when he has to rescue her, and a rivalry between Hellboy and Ben that is hinted at here and there but ultimately goes nowhere. Perhaps the most disappointing subplot involves Nimue trying to convince Hellboy that he should marry her for social justice reasons: As she observes, not incorrectly, they live in a world where monsters are being slaughtered by humans for simply existing, and Hellboy himself is a monster who is regularly mistreated by the people he risks his life to protect. While Nimue's methods for achieving justice for the otherworldly are without a doubt questionable, she has a valid point about their grievances against mankind, at least based on what we see on screen. Yet after the plot has Hellboy stand up to Bruttenholm and declare that the mistreatment of monsters is wrong, he inexplicably fails to bring up his grievances ever again. That subplot gets forgotten so that we can go return to his fight with Nimue.

On the one hand, adding that level of moral ambiguity to a story called "Hellboy" may have been ill-advised. Then again, at least it would have been interesting, and that would have been a marked improvement over what's left behind on screen.

The most disappointing aspect of this movie is the degree to which it is visually unremarkable. Gone are the vivid colors and realistically grotesque monsters from the del Toro entries. A big part of the problem is that the creature designs are unremarkable — if you've seen any generic demonic action or horror flick, you won't be blown away with what you find here — but it doesn't help that the movie overuses CGI. This isn't to say that the original necessarily avoided computer-generated special effects either (I have no idea how much of it was practical and how much computer-based), but at least those effects all looked like they existed in our flesh-and-blood universe. Aside from Hellboy and Nimue themselves, however, every otherworldly being in "Hellboy" looks like a character from an animated film that haplessly wandered into this one. Even the gore scenes, which could have given this movie some punch, fail to land for that reason. You can be as creative as you want in showing people being skinned, crushed, bisected, devoured and torn asunder, but if it's all done in such a way that your brain immediately registers it as unconvincing animation, the visceral and emotional impacts are dulled.

This movie also fails in the essential area of character development. Harbour is about as good as Perlman here in terms of creating a Hellboy who is equal parts fearsome, bad-ass and gruffly likable, but del Toro's script does a much better job of making him feel like a character in a story rather than an action star wearing make up and prosthetics. Similarly Perlman's relationship with John Hurt's Bruttenholm in the original film felt much more authentic and touching than Harbour's interactions with McShane here. This isn't to say that Harbour and McShane don't have chemistry (they do), but the script doesn't seem as interested in them as it is on moving from one action set piece to the next. And since, as mentioned before, those set pieces are nothing but CGI-fests, it means that we're shortchanging on the heart of the movie to move to muscle that is much punier than the filmmakers realize.

Ultimately, it is hard to regard "Hellboy" as much more than a placeholder on the calendar for superhero movie fans who have already seen "Shazam!" and "Captain Marvel" (both much better films) and are impatient until "Avengers: Endgame" comes out. If this had been akin to del Toro's "Hellboy" movies, I'd say it was worth the watch. As things stand right now, though, a moviegoer will get better bang for the buck rewatching "Shazam!" or "Captain Marvel" than seeing this piffle.