Funnier and sweeter than "Wonder Woman" and "Aquaman," this love letter to superheroes is a solid standalone film 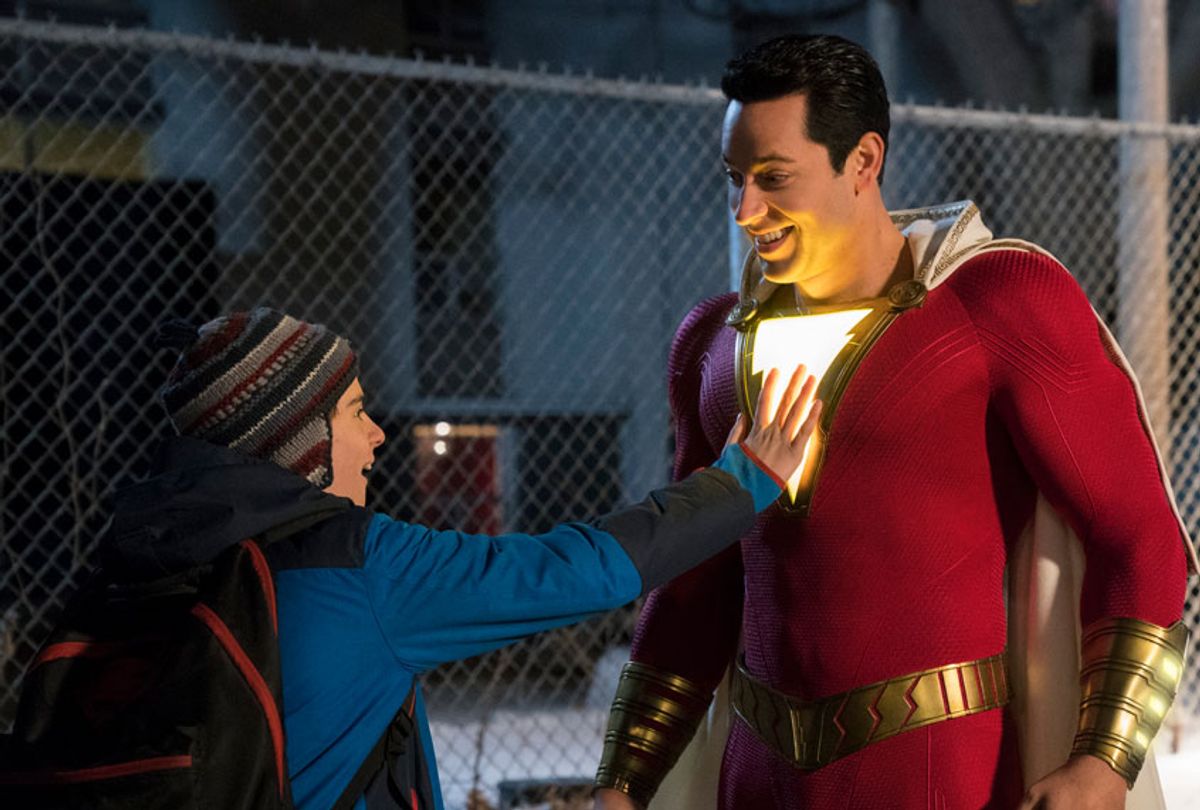 "Shazam!" offers a lesson to Hollywood executives trying to cash in on the superhero movie craze — if you want to do it right, focus on making a movie that is smart and heartfelt rather than perfectly crafted to fit into a cinematic universe.

When William "Billy" Batson (Asher Angel), a 14-year-old orphan who was abandoned by his mother as a young child, is unexpectedly transported to a magical location known as the Rock of Eternity by an ancient wizard named Shazam (Djimon Hounsou), he is given superpowers including super-strength, super-speed, flight, resistance to bullets, the ability to shoot electricity from his fingers and (of course) the ability to assume the form of an adult in a delightfully retro costume with all of said powers whenever he says the name "Shazam!"

Opposing Batson, however, is a supervillain with an unusually well-developed backstory. Indeed, not since Killmonger in "Black Panther" has a supervillain been as sympathetic as Dr. Thaddeus Sivana (Mark Strong), who endured horrific psychological abuse at the hands of his father and older brother in 1974 as a child in upstate New York. When he is transported to the Rock of Eternity and is deemed unworthy of Shazam's powers, he vows to prove that he is good enough to both the strange wizard and his heinous immediate family. Because the writing and acting are so strong, the audience is able to understand Sivana's pain even as he acts like the monster that circumstances practically foreordained he'd become.

Focusing on Sivana's story risks making this movie seem grim, though, when in fact its lighthearted humor is its main strength. Nothing in the DC Extended Universe films — which have so far included "Man of Steel," "Batman v. Superman: Dawn of Justice," "Suicide Squad," "Wonder Woman," "Justice League" and "Aquaman" — can properly be described as a comedy. The best movies of that bunch, "Wonder Woman" and "Aquaman," have their funny moments, but all still firmly feel like traditional superhero epics, in addition to connecting themselves to a grander universe of superhero movies.

"Shazam!", on the other hand, seems content to be a happy movie about why kids love superheroes and wish they could become heroes themselves. The best scenes in the film involve Batson in adult form as the superhero Shazam (Zachary Levi), learning how to use his powers and exulting in the coolness of it all with his foster brother and best friend Frederick "Freddy" Freeman (Jack Dylan Grazer). The performances by Levi, Grazer and (in non-superhero form) Angel are all buoyed by a fantastic script by Henry Gayden and the skillful direction of David F. Sandberg. While superhero origin stories and learning-how-to-use-their-power story arcs are usually obligatory affairs that feel dreary and recycled, those moments are the primary appeal of "Shazam!" We laugh at the banter of these characters — who know they live in the DC superhero universe and play off of that fact — and care enough about them to enjoy seeing them revel in being part of their own superhero story.

Special attention should also be paid to the other child actors as well. Indeed, "Shazam!" boasts some of the best child performances recently seen in a big-budget motion picture thanks to the characters of the other foster home children. These include the self-appointed "den mother" Michelle (Grace Fulton), enthusiastic gamer Eugene (Ian Chen), shy Pedro (Jovan Armand) and sweet Darla (Faithe Herman). In a lesser movie, these characters would have been "quirky" decoration on the story's periphery, to be dragged into the main action during the third act as rescue bait for the main characters. Here, though, each one is developed as being worthy of attention and interest in their own regard, and while I won't spoil their role in the movie's climax, it gives them far more to do than would normally be the case in this genre.

It's easy to appreciate "Shazam!" as a charming and breezy superhero flick, but its quality is more impressive given that comes out of the problematic DC Extended Universe. For its first six movies, the DCEU has been trying to ape the Marvel Cinematic Universe by making each of its movies work as part of a larger narrative puzzle. This isn't an intrinsically bad idea, but as the Marvel Cinematic Universe has already started to demonstrate, it becomes increasingly difficult to make individual films feel like their own distinct property rather than glorified TV episodes. For the DCEU, this was worsened by the fact that Warner Brothers executives rushed to create their "universe" without bothering to establish solid franchises first. The negative-to-mixed critical and audience reactions to all of their earlier films save for "Wonder Woman" and "Aquaman" demonstrated the folly of this approach, prompting the studio to decide that it would focus more on producing quality standalone movies in the future.

"Shazam!" is proof that that was the correct direction in which to go. The only recent superhero movie that is anything like it was "Spider-Man: Homecoming," which also revolved around the wonder a child would feel if given the opportunity to be a superhero. Yet even that movie had the flaw of not being able to really savor the superhero's origin; Peter Parker (Tom Holland) had already been given his superpowers by the time we met him (thanks to the MCU not wanting to repeat the story already told twice, in "Spider-Man" and "The Amazing Spider-Man," over the previous 15 years), and had already appeared as Spider-Man in "Captain America: Civil War." By being a self-contained story, "Shazam!" feels more like the kind of movie that any child could wander into and immediately become engrossed.

The end result is that "Shazam!" is the funniest, sweetest and most innocent movie in the DC Extended Universe — a sign that it is at last ready to compete with Marvel.