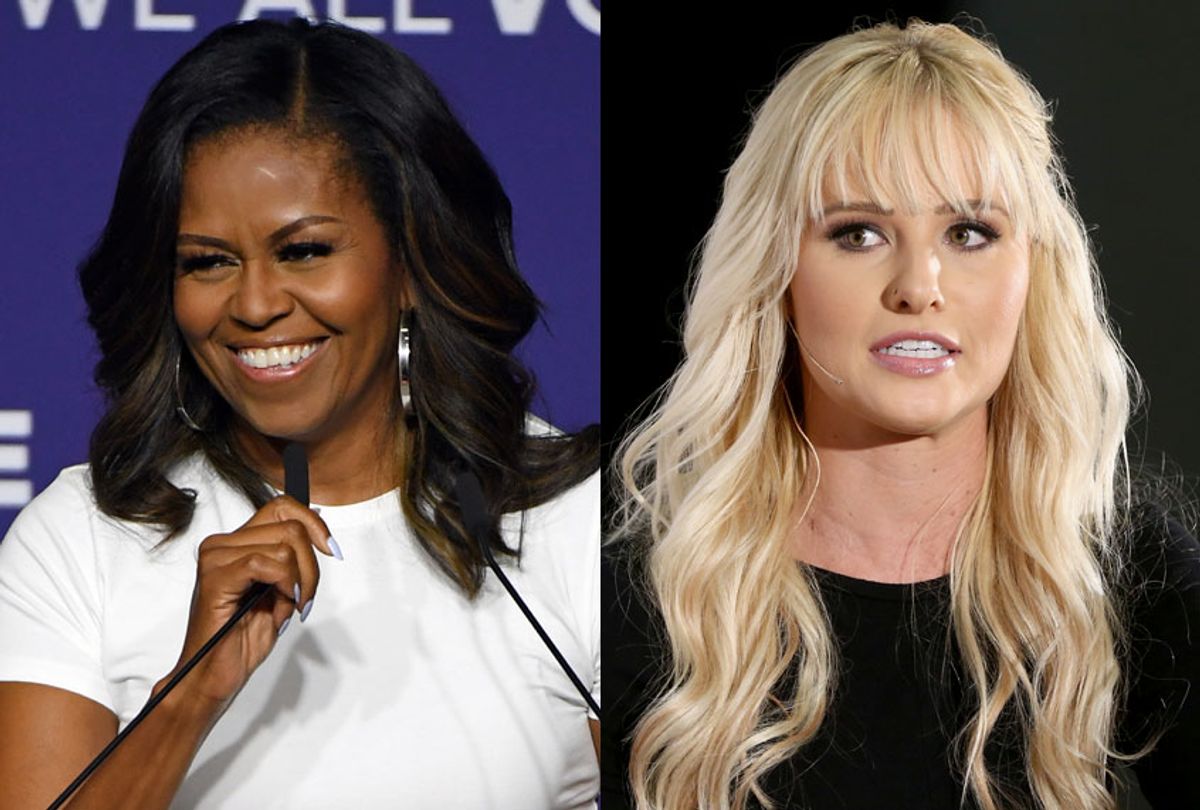 Lahren's criticism began after "Fox & Friends" co-host Brian Kilmeade showed a clip of Obama delivering a speech in which she used the analogy of a broken home to explain what it is like to live in the United States under President Donald Trump.

"We come from a broken family," Obama said. "We are a teenager where, you know, we're a little unsettled, you know, and having good parents, you know, is tough. Sometimes you spend weekends with divorced dad and that feels like it's fun but then you get sick. That's what America is going through. We're kind of living with divorced dad, right?"

After showing the clip, Kilmeade commented that this was for "a book event with Stephen Colbert. Really, divorced dads really have — are just clueless and insensitive to raising children? Is that really the analogy that she thinks is effective?"

Lahren responded by claiming that Obama was smearing single fathers.

"Well, I think Michelle Obama is becoming incredibly tasteless, and to use that kind of language to attack the president, I'm not very shocked or surprised by it, but I will say this: Can you imagine if a conservative would compare anyone to [a] single mom in a derogatory fashion?" Lahren argued. "There would be outrage, there would be backlash, it would be all over social media. There would just be mass outrage. But because Michelle Obama is Michelle Obama, she's a Democrat and she has the last name of Obama, she can get away with it. But really she's not just belittling Donald Trump, she is belittling all those divorced dads and single dads out there that are doing a great job."

Since being fired from The Blaze and then picked up by Fox Nation, Lahren has become an increasingly popular figure among American conservatives, and within the last year has gained particular attention for her criticisms of Rep. Alexandria Ocasio-Cortez, D-N.Y.

In January, Lahren got into a feud with rapper Cardi B, which started when Lahren insulted the artist by saying, "Looks like [Cardi B] is the latest genius political mind to endorse the Democrats. HA! Keep it up, guys! #MAGA2020." Cardi B responded on Twitter with "Leave me alone I will dog walk you."

Later, Rep. Ocasio-Cortez butted in, tweeting, "Why do people think they can mess with Bronx women without getting roasted? They act as though our borough hasn’t been perfecting the clapback game since the Sugarhill Gang ? y’all just found it on Twitter." Lahren replied: "Aren’t you the same girl who whines about Trump inciting violence? Now you applaud it because it’s against a female conservative you disagree with politically? Convenient. P.S. I do fully acknowledge @iamcardib is smarter than YOU."

Lahren also criticized Ocasio-Cortez for being unsuccessful, arguing that "there's a difference between being successful on Twitter and social media like Alexandria Ocasio-Cortez and being relatable on social media platforms, and actually being successful in real life." She added, "But listen — the American people — we don't want a handout. We want the government's hand off. And we want the ability to achieve the American dream in a safe and secure nation. And this crop of Democrats offer none of those things."