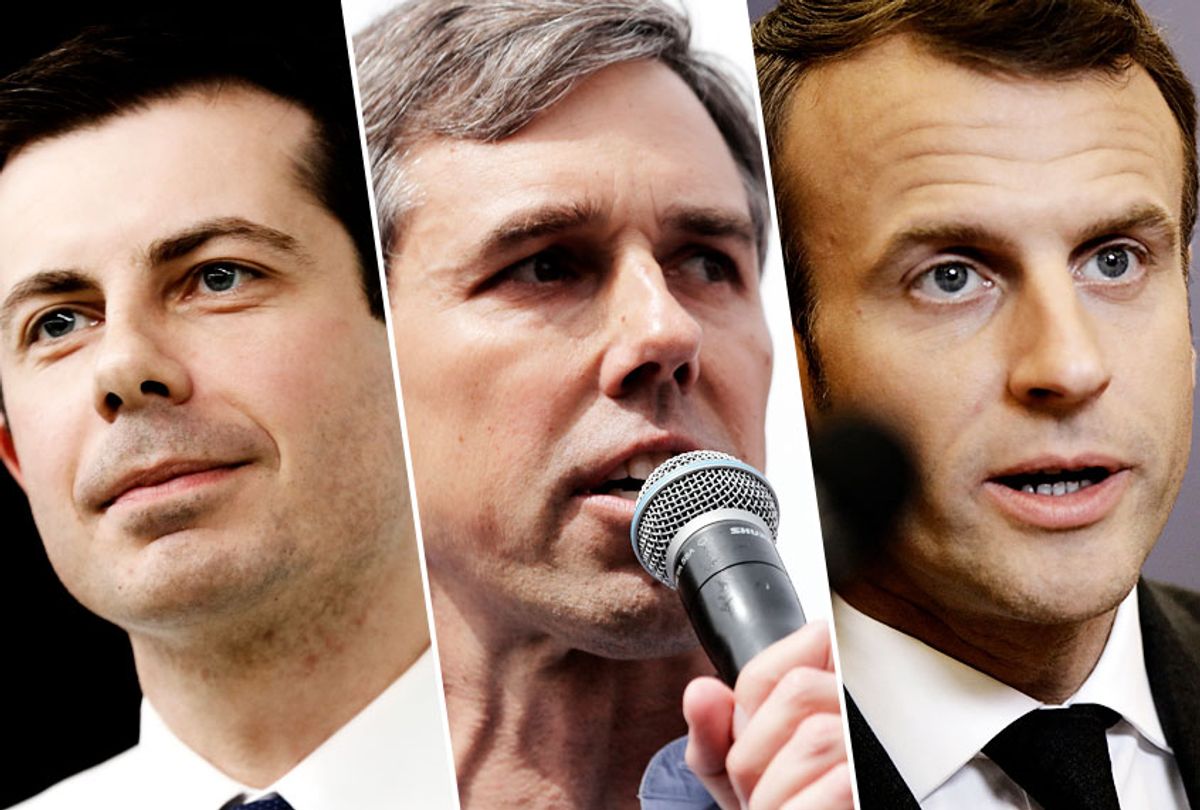 There’s a moment in Lucas Hnath’s play “Hillary and Clinton” -- which is more or less a fictionalized retelling of an episode from the 2008 primary campaign between Hillary Clinton and Barack Obama -- when the character named Bill Clinton contemplates his wife’s youthful opponent with exasperation. Obama isn’t just like him, Bill says: “He is me.” Meaning, one supposes, a blank slate onto which people project their idealized vision of an American leader, or a vessel for what Sarah Palin immortally called “that hopey-changey stuff.” (If Palin was a disaster as an office-holder and candidate, she doesn’t get enough credit as a wit.)

You have to wonder whether Obama himself has a similar reaction, in 2019, observing the so-called rise of Pete Buttigieg, the 37-year-old mayor of South Bend, Indiana, who is suddenly being viewed as a plausible presidential contender. “Mayor Pete” has already been compared to Obama as an orator, a “transformational” symbolic figure and a potential unifier of the Democratic Party and the nation. It has even been hinted, based on next to no evidence, that Obama looks favorably on Buttigieg as a semi-anointed successor, which would be an obvious diss to the glad-handing, near-beer-drinking Godot of the 2020 race, Joe Biden.

All of this seems preposterous at first glance, maybe even a sign of desperation in a party that has dozens of people running for president but no clear idea what it stands for. Under ordinary circumstances, there’s no way in hell that the mayor of the fourth-largest city in the 17th-largest state -- no matter how much overachiever charisma, and how much seeming demographic resonance, he possesses -- could become a viable presidential candidate. But I guess you know what I’m going to say next about “ordinary circumstances” and about our current president, who got the job despite having no previous government experience of any kind. (Arguably he still doesn’t, after two years in office.)

For the moment, Buttigieg seems to have displaced Beto O’Rourke as the leader in the We Want Obama Back sweepstakes, at least pending the confusing entry of Obama’s former sidekick. (Or, as Biden was recently dubbed by Leslie Jones in a “Saturday Night Live” sketch, “Obama’s granddaddy.”) Whether this yearning for a “moderate” or “non-ideological”  redeemer is actually constructive at this point in history, or likely to work in practical terms, is a difficult question to answer.

Look across the Atlantic at the endless turmoil in France, where Emmanuel Macron swept to victory on exactly that premise -- and was hailed as the urbane, enlightened neo-Obama who would lead the Western world’s resistance to Donald Trump. Once it became clear that Macron represented exactly the same neoliberal or “reformist” austerity policies as the previous failed government, but cloaked in ecclesiastical arrogance and a lot of business-school jargon, his popularity cratered to Trump-like levels, resulting in the Yellow Vest protests that paralyzed Paris for weeks. Macron is now trying to exploit the catastrophic fire in Notre Dame as a unifying event to restart his presidency, which can only be described as shameless misdirection.

Democrats who long to restore the Obama regime, in other words, should be careful what they wish for. On the question of Pete Buttigieg, we can only conclude that nothing is impossible these days, and the collective wisdom of the political class is worth no more than the paper it isn’t printed on. That said, it’s entirely likely that the Buttigieg bubble is nothing more than a collective flirtation or thought-experiment of the sort that almost always happens early in a presidential cycle. (See also: Fred Thompson, Jon Huntsman, Howard Dean, Paul Tsongas.)

I’m not remotely trying to deny that Buttigieg is a fascinating character with an unlimited supply of what his mom might describe as gumption, or that his candidacy has historic resonance. He speaks a bunch of languages, served in Afghanistan, has an A-plus education and is clearly a culture-vulture despite living in one of those places in the heartland that intelligent and talented people have traditionally fled as soon as possible. And, oh yeah, he’s the first out gay person to run for president. (Let’s not get into the whole complicated question of James Buchanan, who was a different person at a very different time and was nobody’s idea of a role model.)

So far the Buttigieg bubble has been a whole lot of rapturous media coverage along those lines (and with attendant, sometimes savage backlash), along with surprising fundraising success and a modest uptick in the polls. But to describe him as a frontrunner is still preposterous: At best, Buttigieg now sits somewhere between 7 and 10 percent, in the second tier of candidates that includes Kamala Harris, O’Rourke and Elizabeth Warren, but well behind Biden and Bernie Sanders.

In the upside-down demographics of the 2020 race, it’s worth noticing some especially strange data points. Buttigieg, who would become the youngest president ever, appears to draw his support so far from middle-class white liberals older than he is. In other words, from actual Obama and Bill Clinton voters, rather than younger people who remember them largely as mythology. Sanders, who would become the oldest president ever (as would Biden), famously draws most of his support from younger voters, a group where he dominates all other candidates and where Buttigieg barely registers.

But who will win, and even who should win, are always the least interesting questions in electoral politics, as Bill Moyers told me years ago. The interesting part always lies in the stories we tell ourselves about why things are happening the way they’re happening, and what they mean. Those stories, far more than policy or ideology or literal-minded questions of “representation,” are what drive voter behavior and win or lose elections.

Like Obama and Bill Clinton before him (and like Macron within a different national tradition), Buttigieg presents himself as the hero of a certain kind of story about politics and democracy and the future of America. It’s an undeniably appealing story about healing divisions and overcoming partisan bitterness and standing up for large, vague and more or less inarguable values: decency, diversity, tolerance, dialogue, practicality.

Whether that story contains the winning formula one more time in the 2020 election, and whether a small-town mayor with an extremely thin résumé but an “appealing life story” can ride it all the way to the White House, remains to be seen. My colleague Amanda Marcotte recently observed in conversation that Buttigieg’s rise is one of those exercises in projection -- a large-scale effort to game out what “swing voters” might want and to decide who is most “electable” -- to which Democrats are uniquely vulnerable.

It’s as if the entire leftward half of the electorate become political consultants making strategic calculations, because winning the next election over the increasingly repulsive Republicans is urgently necessary and must take precedence over ideological purity or any possible policy considerations. Which would be a much stronger argument if “mainstream” Democrats hadn’t rolled it out in every single election since the beginning of time, or at least since the George McGovern debacle of 1972. And if it hadn’t led so often to humiliating and/or agonizing defeat: Walter Mondale in 1980, Michael Dukakis in 1984, Al Gore in 2000, John Kerry in 2004, what’s her name the last time around.

Ezra Klein in Vox develops an interesting Pete-centric argument about the “psychological sorting” of American politics, in which liberals are primarily motivated by hope and conservatives by fear, which comes with the less savory sexist subtext that apparently only male candidates are seen as qualified to deliver the “hopey-changey stuff.” Nathan J. Robinson, the editor of Current Affairs, forced himself to read Buttigieg’s campaign autobiography and has returned alive with a vicious long-read takedown, which more or less boils down to the obvious observation that Buttigieg is a classic neoliberal reformer, with little awareness of inequality and zero interest in structural economic changes or in rethinking America’s role in the world.

Those are all valid factors in considering why this supremely undercooked candidate is having a moment, and what it might mean in the longer term. Robinson’s analysis in particular points toward the historical blindness or wishful thinking that draws liberal voters to would-be messiah figures time and again, in search of a new JFK or a new Lincoln, the semi-mythical figures after whom Bill Clinton and Obama conspicuously modeled themselves. Democrats are indeed driven by hope and faith: the hope that America’s political institutions can still function more or less as designed; the faith that a president can rise above all the angry partisan division, the legislative paralysis of Washington, and all the secrets and lies that obfuscate any serious discussion of our nation’s economy or its role in the world, and unite Americans around a common purpose and a vision of the future.

But historians will not compare Bill Clinton to JFK or Obama to Lincoln, except in ironic terms. When we consider what actually happened during their presidencies, and where we are now, the path of hopey-changey vagueness offered by Pete Buttigieg and Beto O’Rourke and Emmanuel Macron -- in undoubted sincerity, in all cases! -- begins to look like a dead end.