Arya Stark is how old now? Why her "Game of Thrones" scene with Gendry is so controversial

It's great that Arya's first time was consensual. But I'm sorry, no one wants to see kids getting it on 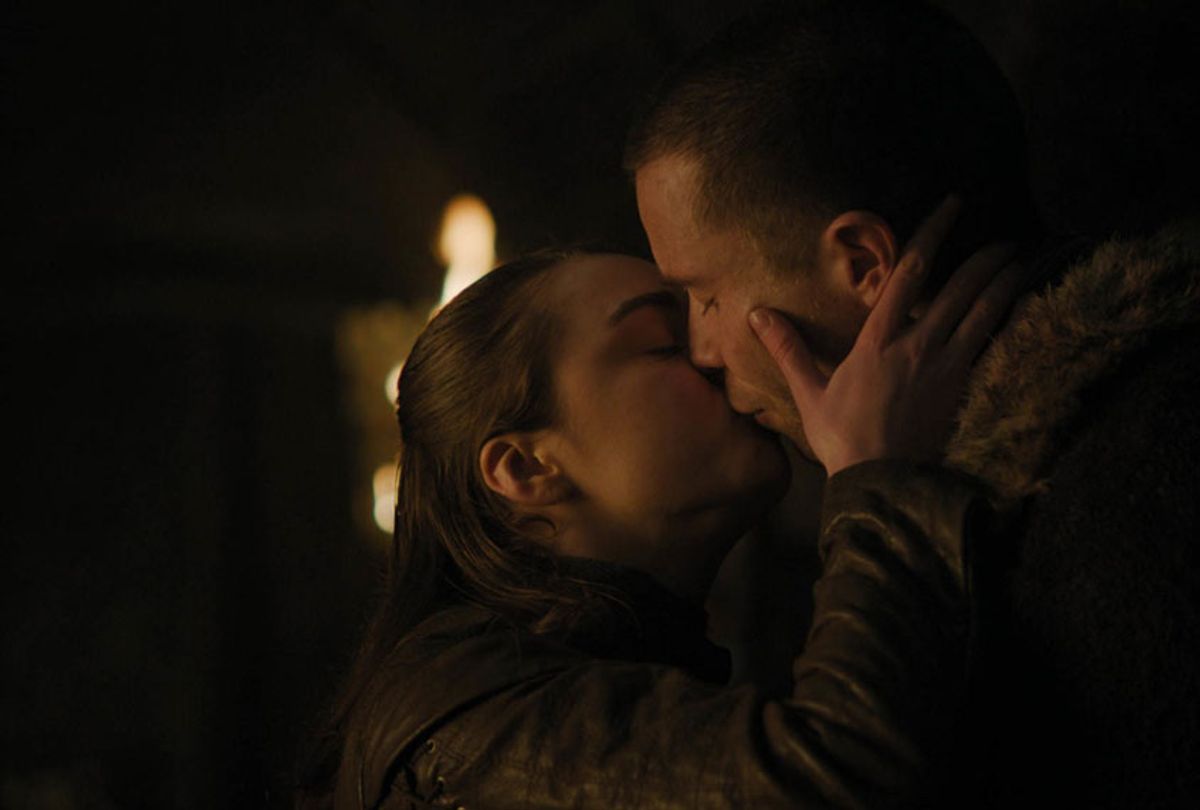 We all 'shipped Arya (Maisie Williams) and Gendry (Joe Dempsie), right? For a show with so many unhappy matches, this potential "Game of Thrones" couple stood for a reimagined union of the Stark and Baratheon houses promised by the former King Robert in Episode 1, when he told Ned Stark, "I have a son, you have a daughter. We’ll join our households."

"Gendrya" is easy to root for. Neither Arya nor Gendry are inherently evil, like Sansa's original match Joffrey (who wasn't even a Baratheon, of course). And there was no reason to suspect a storyline in the making around their possible courtship of kidnapping, rape and death, like that which befell doomed Lyanna Stark before her arranged marriage to King Robert.

Nonetheless, many "Game of Thrones" fans were not prepared for what went down Sunday night. Episode 2 of the final season is called "A Knight of the Seven Kingdoms," aptly titled for Brienne's new designation. But much of the episode focused on the remaining characters we've grown to love as they marked their potential last night ahead of the battle with the dead in various ways. For Arya, that meant having sex for the first time.

Moments before, Arya sits with her old travel companion The Hound in a moment of quiet rapprochement. They're soon joined by Beric Dondarrian, but Arya quickly turns annoyed when she realizes she's about to spend spend her last night alive grunting about fights and deaths. "I'm not spending my final hours with you two miserable old shits," she declared.

Gendry finds Arya in the cellar shooting arrows and presents her with the spear she has requested. It resembles the weapon Prince Oberyn Martell used to fight The Mountain, and utilizes the shape of the long stick that Arya trained with extensively in Braavos. But this weapon is finished with dragon glass on each end, perfectly suited for the battle with the Night King.

Fine weaponry is a fitting aphrodisiac for Arya Stark, apparently. True to her matter-of-fact nature, the younger Stark sister begins to probe Gendry about the women he's slept with, attempting to gauge how experienced he is. Once he tells her he's been with three women, Arya smiles, satisfied with this answer. "We're probably going to die soon. I want to know what it's like before that happens," she says before kissing Gendry passionately.

At this point, every single person at my watch party shrunk back against the couch as if trying to get as far away physically from this moment as possible.

"I do not want to see this," one friend said.

"Wait, should I have been more specific, when I said I wanted Gendry and Arya together? Because I did not want this," another added.

And "Game of Thrones" stretched this scene out. Not content to merely insinuate that they had sex, the show made us watch it begin. We covered our eyes with our hands, wincing, as they undressed each other and themselves. Ew!

My friends and I were not alone in this feeling. Actress Maisie Williams told Entertainment Weekly that when she first read the script, she thought it was a "prank," as the showrunners had been known to present fake scripts to the cast members. She continued, "I was like, 'Yo, good one.' And [the showrunners were] like, 'No, we haven’t done that this year.' Oh f—k!"

Of course, nudity and sex scenes, especially awful ones, have been plentiful throughout the previous seven seasons of "Game of Thrones." The show's tendency to employ rape scenes as titillation in previous seasons drew much-deserved criticism, and this scene thankfully is not depicted in that way at all. But Williams was only 11 years old when she began filming the series, and Arya has always seemed on the young side, though Williams herself is 22 now. As far as I can remember, only Joffrey (of course!) ever celebrated a name day celebration on the show. That, combined with how irregular the passage of time is, means viewers don't really get a sense of how much the characters, especially the ones who started as children, have aged since Season 1.

Before you call me a prude or sexist, I would have the same uncomfortable reaction if Rickon Stark — rest his under-developed character's soul — got a sex scene as well before he died. Not to mention how uncomfortable it was knowing how young Tommen Baratheon was when he was having sex with Queen Maergery. So, yes, I'm glad Arya's first time was consensual, on her own terms, and not incestuous  — all rarities on "Thrones" — but I'm sorry, nobody wants to see kids get it on.

"In the minutes during and immediately after the sex scene, there was a giant spike in users googling 'Arya Stark age' and 'Maisie Williams age,'" according to the Washington Post. "Arya is 11 years old in the first season, making her 18 when things heat up in the forge — viewers have watched Arya grow up on screen. Many compared the scene to watching someone have sex with their little sister."

Aside from the issue of Arya's age alone, the show had also left the character's gender and sexual orientation unexplored before then, making the sex scene feel even more abrupt. From the beginning, Arya has bucked stereotypical gender norms, which are even more rigid in the medieval setting of Westeros. But Brienne of Tarth, who similarly rejects traditional conventions of femininity, has had a developed and clear sexual orientation: She was openly in love with King Renly Baratheon first, and after his early death she had eyes for Ser Jaime Lannister. Arya? She's been too busy learning how to kill to indulge in crushes.

"As viewers, we don’t know how to picture Arya in a romantic relationship or a sexual situation, because — before the last episode, when her gaze lingered on Gendry just long enough to make it clear she might be interested — she’s never really dropped any hints about the kind of partner she would seek out," the Post added. "For most of the series, she is traveling alone, relentlessly and single-mindedly pursuing people on her hit list. The closest she gets to talking about romantic plans, perhaps, is at the beginning of Season 1, when her father tells her she will grow up to marry a high lord."

To which Arya shakes her head and tells her father, "No, that's not me," before returning to her exercises, as she prepares to become a certified fighter.

While some fans celebrated the Arya and Gendry scene, many also expressed shock at how unambiguous the scene was. It also didn't help that like Season 8's premiere, last night's episode offered more build-up towards the battle with the dead, and so the Arya-Gendry sex scene could be categorized as the most tangible action in this episode.

Despite the awkwardness of the sex scene, it did feel like an active choice from Arya. In choosing life over death, she reminds us of her humanity. As Williams told EW, "It was really interesting because it’s a very human relationship for Arya. . . This is something she’s stayed away from, an emotion we’ve never really seen her engage with." And so if we have to suffer through partial nudity from an actress we still think of as a kid sister to signify that maybe, just maybe, Arya will survive? Damn it, "Game of Thrones," I'll take it.