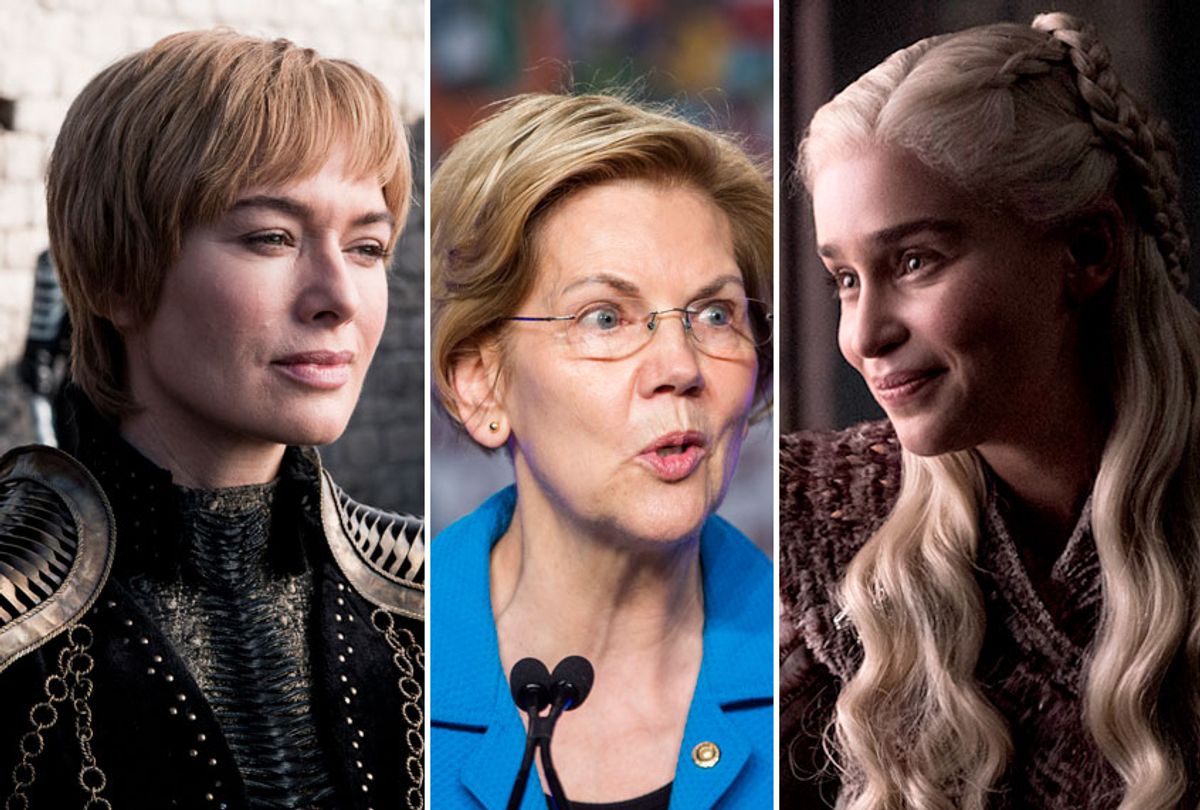 Elizabeth Warren has already established herself as a champion of the smallfolk with her presidential campaign's progressive platform targeting inequality in many forms. So it may come as no surprise that as a "Game of Thrones" fan, she's backing the Breaker of Chains, Daenerys Targaryen, to take the Iron Throne from the ruthless and tyrannical Cersei Lannister.

"Daenerys 'Stormborn' Targaryen has been my favorite from the first moment she walked through fire," Warren wrote in an essay for The Cut. After reviewing the backstory of the iconic Emilia Clarke character, Warren explains that she admires the royal ruler, because "Dany believes fiercely in her right to rule, but she despises what ruling means in the world she’s grown up in. She doesn’t want to be a slave owner or a dictator — and she definitely doesn’t want to become her murderous father. She tells Ser Jorah: 'Slavery is real. I can end it. I will end it. And I will end those behind it.' Before sailing across the sea to Westeros, she frees the enslaved people of Meereen and creates an army that fights because they want to, not because they have to. (Also, she has dragons.)"

Warren also notes that Dany's belief in a government that does not simply serve the rich and the powerful is revolutionary, even outside of a fantastical context.

"This is a revolutionary idea, in Westeros or anywhere else," Warren observed. "A queen who declares that she doesn’t serve the interests of the rich and powerful? A ruler who doesn’t want to control the political system but to break the system as it is known? It’s no wonder that the people she meets in Westeros are skeptical."

Warren then contrasted Dany with "the villain we love to hate, Queen Cersei of Casterly Rock." As Warren describes Cersei's flaws as a leader, it becomes pretty clear she is denouncing those who more broadly believe militarism reinforced by appeals to greed can or should prevail in politics.

"Unlike Dany, Cersei doesn’t expect to win with the people — she expects to win in spite of them," Warren writes. "When Cersei’s brother (and lover) Jaime begs her not to wage a war — arguing that they don’t have the warrior strength of the Dothraki or the allegiance of the other houses, she replies with all the confidence in the Seven Kingdoms: “We have something better. We have the Iron Bank.” Rather than earn her army, Cersei’s pays for it. She buys 20,000 Golden Company mercenaries — though they arrive without their legendary elephants — with funds from the Iron Bank. But Cersei has no intention of sending her private army north to help defeat the army of the dead — that’s Jon and Dany’s problem. No, Cersei’s army will sit back and wait for whatever comes their way. Cersei’s betting on the strength of the bank to get her through the biggest fight of her life. It never crosses the mind that the bank could fail, or betray her."

Regardless of whether one agrees with Warren's analysis, it is hard to differ from her regarding the stakes:

"With all these powerful women preparing for battle, will the mighty bank silence the army of the people? Will the army of the dead heading straight for Winterfell make all of this talk about breaking wheels irrelevant? We’ve got five episodes to find out if the people can truly break their chains, destroy the wheel and rise up together to win."