For Havana Club rum, the play's the thing: "Amparo," a Cuban tale of exile, loss and reclamation 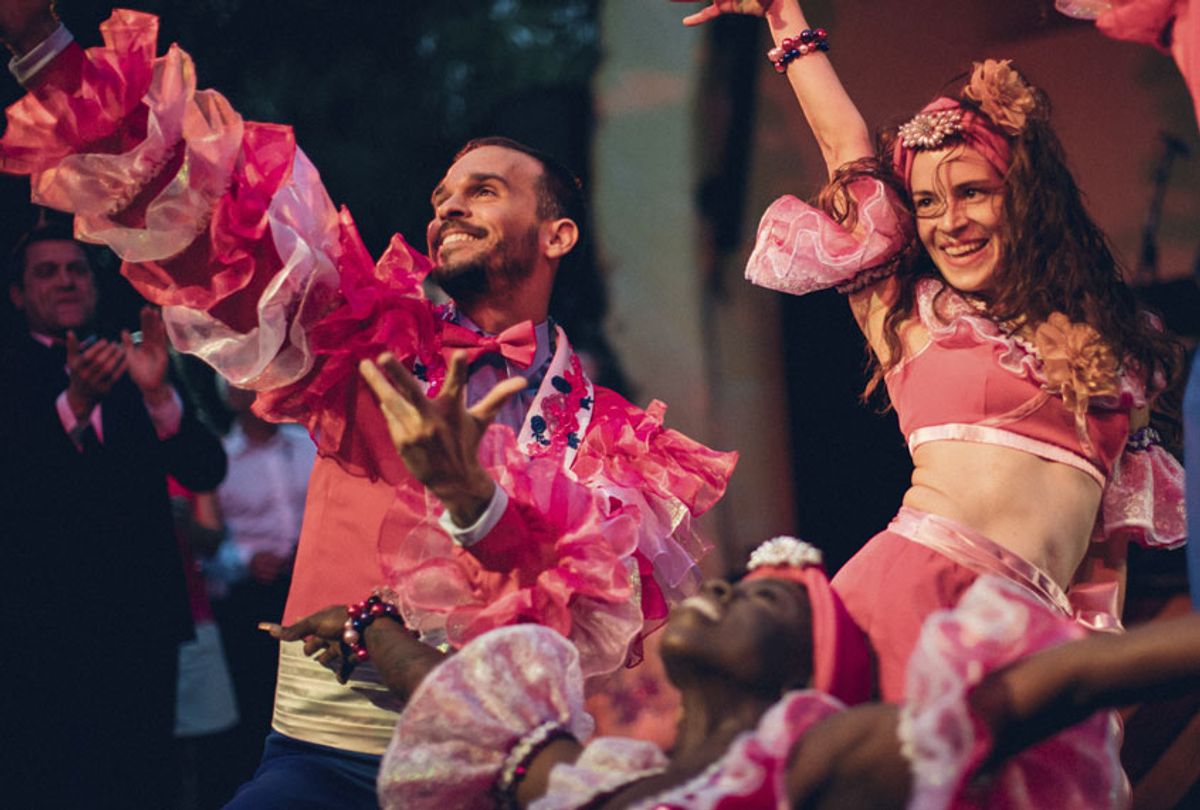 Consider the story that a single drink can hold. As Wayne Curtis argues with his indispensable book, “And a Bottle of Rum,” the history of the New World can be told through the lens of this one spirit and how it shaped centuries of industry and culture. Take New England: once a thriving hub of the colonial rum trade, the industry died out almost completely in the 19th century only to make a comeback in the current craft-spirits boom, with companies springing up that explicitly draw on the region’s rum heritage. Which is to say there is a story there that has roots, and in a crowded marketplace, a story has value. Story, after all, is mostly what we’re drinking, once small differences in flavor profiles and proof are accounted for. You are what you drink — offer a round of Bud Lights to a group of craft beer drinkers and watch that maxim come to life.

For the Arechabala family, the founders of Havana Club rum, their story is also all that they had when they fled Cuba in 1963, after Fidel Castro's forces seized power in 1959 and the communist government nationalized their family distillery a year later. Now a Bacardi product — more on that later — “the real Havana Club,” as its social media handles declare, wants to tell its story in the midst of a decades-long fight to reclaim its name once and for all.

The tale is both unusually dramatic and human in scale: it starts with the thrill of young love, then moves through the anxiety of revolution, the anguish of separation and imprisonment, and a terrifying flight into exile, followed by life with the split heart of the refugee, one half in their new country working unrelated jobs to get by and the other back home. It ends decades later, with Bacardi — which survived the Cuban Revolution because it had already spread out production to other countries, including its flagship distillery in Puerto Rico — buying the original family recipe and agreeing to produce Arechabala's authentic Havana Club rum and put it back on the  U.S. market.

Such a dramatic origin story demands an equally dramatic presentation. Produced with impeccable artistry by Broadway Factor, “Amparo” is a full-length original immersive theatrical experience currently running in a limited engagement through May 31 in downtown Miami, after pilot residencies in Miami and New York last year. Like “Sleep No More” meets the Cuban Revolution, “Amparo” dramatizes the Arechabala family’s experience in gut-wrenching and up-close detail, guiding the audience through a familiar story of Cuban exile using the lens of this specific family and their business.

"For a very long time, the lens that has been pointed at the Cuban community has been from the outside," said director Victoria Collado during a talkback after the preview performance I attended as a guest of Bacardi earlier this month. "What it is to be Cuban has been defined from the outside."

It's a human-focused play that would stand on its own if fictionalized. From the core of the story recounted by Amparo Arechabala herself (played as a young woman by Bertha Leal and and as the matriarch by Susana Pérez), widow of distilling family heir Ramon (René Granado and Roberto Escobar), playwright Vanessa Garcia crafted 22 different storylines, one for each character in the sprawling, interlocking tale. The story is told through the experiences of nightclub performers, revolutionary soldiers, lawyers, distillers, workers — some of whom begin the play as one kind of character and transform over the course of the experience — and, of course, Ramon and Amparo.

"Every single cast member is Cuban or has Cuban family, so it comes from a place of true authenticity,” said Garcia. “I am also a product of two Cuban parents and Cuban grandparents, and that is some thick blood. Immediately, every single person in the cast and crew, and the people creating this all across the board, feel [the Arechabala story] immediately, and that connection comes from a place of core authenticity.”

Staged throughout a building-wide set, “Amparo” begins in the bar, of course, where patrons sip hand-crafted classic cocktails like the Air Mail and Havana Especial before being separated into five groups, each led by a character who serves as a guide. As part of the group led by family lawyer Javier (Michael Ferreiro), I traveled up a staircase and entered the staging area through a hole in a tree, a nod to the magical transformation from 21st century real life to Cuba in the late 1950s.

Passing through the doors of Club Náutico we join a glamorous New Year’s Eve party — it's December 31, 1957 — with a live band, populated by actors in character as guests and nightclub performers. The immersion part of the performance begins lightly, tiny period-perfect cocktails in hand, through easygoing conversations with the actors, like when a young Ramon enlists our help in proposing to Amparo. We are split away from our group by different actors on different missions several times, which adds to the intimacy of those encounters. But it isn’t until the calendar moves forward to the next New Year’s Eve and soldiers crash the celebration to announce that President Fulgencio Batista has fled the country that the immersion begins to feel real. After that, audience members are forced abruptly to pick a side — joiners to the revolutionary cause to one end of the room, dissenters to the other — as impatient soldiers carrying very realistic-looking weapons bark orders in our faces.

I join the workers at the distillery committed to keeping the business running during the early days of the new regime. Others from my group end up training with soldiers. When soldiers nationalize the distillery at gunpoint, I spend time in a cramped jail cell with Ramon as he and Amparo share a desperate phone call. When it’s finally time to leave Cuba — we're in 1963 now — I am herded into line with other women to be searched so that nothing of value can be taken out. At one point, a soldier gets in my face and yells at me to unzip a character’s dress for a strip search, and I do it. The experience is that intense, and that effective: I'm terrified, despite knowing that it's not real, that as an audience member I can't be hurt. And that's before the shot rings out from another room.

“The stuff that happens in the strip search is stuff that happened to actual family members of ours,” said Collado. “Every actor, every musician, every bartender [with the production] has brought a piece of themselves into this story. The authenticity comes from the legacy of all of our ancestors. . . .  The jail cells, all of that comes from truthful experiences.”

When the storylines resolve in one room at the end, we fast forward to 1997 to see the relationship between the Arechabala family and Bacardi solidify when the company agrees to buy the family’s smuggled-out recipe and commit to producing Havana Club rum. So here's the real-life wrinkle: In 1993, liquor conglomerate Pernod Ricard partnered with the Cuban government to distribute internationally a rum made in the now-nationalized Arechabala distillery. That brand also sells under the name Havana Club — though not currently in the U.S. because of the embargo. The Arechabalas' trademark, however, had lapsed. When Bacardi resurrected the rum in the late '90s, it sparked a legal fight between the two corporations that continued ever since.

Knowing all of this, I knew it would be easy to be skeptical about the motives of “Amparo.” One way to look at the play is as an extended commercial for a rum now owned by a company nobody would describe as an upstart or an underdog. Pernod Ricard and Bacardi both want to sell their respective brands in the U.S. using this name, because it has history and therefore value. And yet I didn't come out of the "Amparo" experience feeling neutral toward Havana Club, because I couldn't feel neutral about the people whose stories had built the play. "Amparo" is an effective dramatization of a larger political and emotional conflict over homeland and legacy, not a simple branding spat.

As Wayne Curtis writes about the case in “A Bottle of Rum”:

[T]he tussle has resulted in a fascinating spectacle: two foreign-owned companies battling in U.S. courts for the rights to a name for a product that has no connection with the United States.

And perhaps that’s emblematic of what’s become of rum. In the mid-eighteenth century, the fight over rum imports to the colonies was based on actual rum or the ingredients to make rum. Today, it’s a far more ethereal battle over intellectual property rights, rather like something in The Matrix. Rum disputes have become unmoored from the underlying product, which exists only as a symbol.

In Miami, where so many families have a story similar to those depicted in "Amparo," the connection feels as real as the concrete under my feet. Tucked just off bustling Calle Ocho, the central vein of Miami’s Little Havana neighborhood, there's Cuban Memorial Boulevard Park, where I stopped to contemplate the Eternal Torch honoring those who died in the Bay of Pigs. There's a small garden where local free-range chickens wander in search of late afternoon shade, too, and a ceiba tree revered by local practitioners of Santería. Locals descended on the park to celebrate the day Fidel Castro’s death was announced in 2016, banging pots and pans, says Havana Club brand ambassador and "Amparo" cocktail designer Gio Gutierrez, the mixology expert, omnipresent good-vibes host and unofficial hospitality czar of Little Havana, who served up drinks to the revelers that day. Down the street, Azucar Ice Cream Company — a local shop known for its Cuban flavors, like the delicious "Flan” that I sampled, infused with Havana Club Añejo Clásico — served up scoops of "Burn in Hell, Fidel!" ice cream, a specially blended chocolate with a splash of cayenne heat which locals reportedly ordered with relish just for the sheer thrill of saying it out loud.

“It takes ten seconds to say, 'Our family left everything behind and started over.' You say that in a sentence. We’re in a particular moment in time where a lot of people are being displaced. If this is what we feel in an hour and a half [of the play], imagine what it feels like over years," said Collado after the performance. "And I think that we have a responsibility not only to the Cubans here, but to anyone who has left everything behind to start over again, to feel heard. To say we see you, and we see what you went through, and we see the pain, and you will not be ignored anymore.”

Symbols, after all, are more powerful than the highest-proof sip. In a war over whose historic brand is the most authentic, may the best story win.