DNC challenges RNC to swear off Russian assistance in 2020 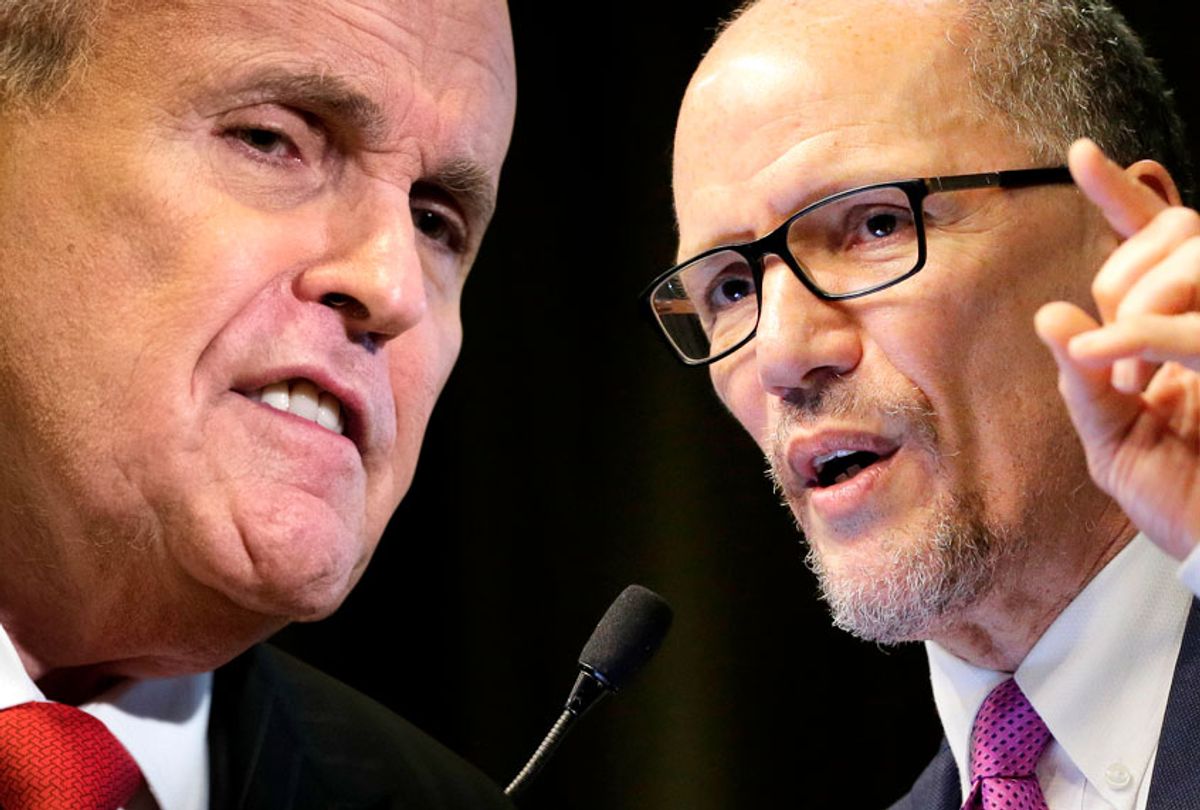 Tom Perez, the chair of the Democratic National Committee, wrote an open letter to his counterpart on the Republican National Committee in Medium denouncing President Donald Trump's lawyer Rudy Giuliani for saying that "there's nothing wrong with taking information from Russians."

"This weekend, Rudy Giuliani said there is 'nothing wrong with taking information from Russians' and suggested that it is perfectly acceptable for campaigns to seek stolen information from foreign adversaries for political gain. This is an affront to our democracy that must be condemned by anyone who cares about our country’s future," Perez wrote in a letter addressed to RNC Chair Ronna McDaniel.

He added, "As the leaders of our country’s two largest political parties, we have a responsibility to protect the integrity of our democratic process. That’s why I urge you to join me in condemning the weaponization of stolen private data in our electoral process."

After describing how Giuliani had recently defended the Trump campaign's decision to accept materials about Democratic presidential nominee Hillary Clinton from the Russian government, how Russia had in general interfered in America's elections and how Trump had openly called for Russia to steal Clinton's personal data, Perez goes on to discuss his concerns about the 2020 presidential election.

"We are now rapidly approaching Election Day 2020. In this age of cyber-warfare, we owe it to the American people to make sure that the election is decided by the will of the voters, not foreign governments," Perez explained.

He added, "My predecessor made this same request to the RNC as Russia’s attack on our election unfolded in 2016. Your predecessor chose to ignore it. The chair of our sister committee, the DCCC, made the same promise; their Republican counterpart at the NRCC also ignored it."

After explaining how the issues at stake involved national security, which should transcend partisan politics, Perez called on both parties to avoid a repeat of the chicanery from 2016.

"Although you and I profoundly disagree on how our candidates should campaign and elected leaders should govern, we should at the very least work together to assure the American people that the process will be fair, and send a message to our adversaries that we will not tolerate the theft and dissemination of private data in our electoral process," Perez wrote.

During his appearance on CNN on Sunday, Giuliani told Jake Tapper that "there's nothing wrong with taking information from Russians." He also argued on "Fox News Sunday" with Chris Wallace that Trump would have been justified to fire special counsel Robert Mueller, asking "when did Mueller become God?" and insisting that "if he had fired him, there wouldn’t have been an obstruction. So as long as he was replaced by somebody, which he would have been, and there were good reasons — arguable reasons."