The MAGA Bomber is right: Donald Trump is "like a new found drug"

2020 Democrats, know this: Trumpism is not just about Donald Trump — it's an impenetrable authoritarian cult 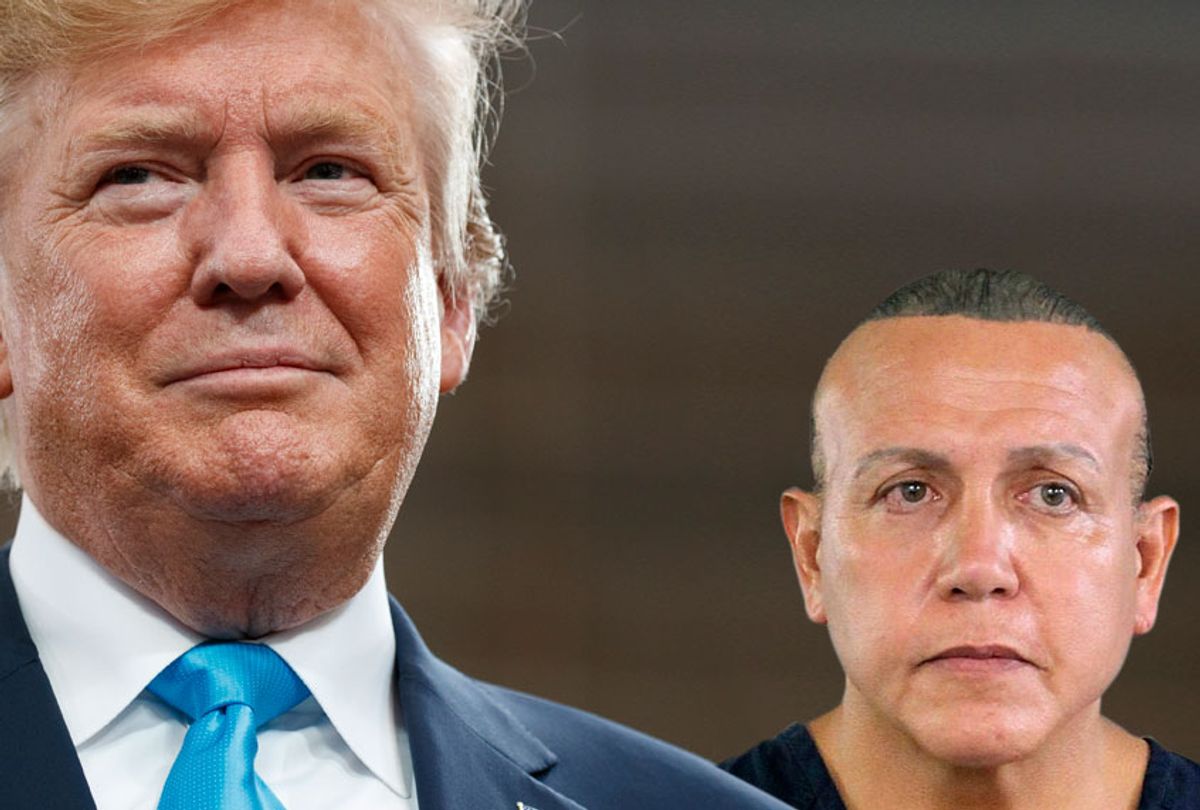 The Democrats will likely lose the 2020 presidential election to Donald Trump. Why? Because the Democrats do not understand that Donald Trump represents an authoritarian movement and a cultural force. Trumpism is not merely or just a set of political policy preferences.

Like other authoritarian cultural movements Trumpism promises a national-cultural transformation, psychological uplift, group superiority, personal salvation, and a sense of membership and belonging in an exclusive community for its members and other supporters.

As a cultural force, Trumpism offers pleasure and joy for its followers and other members of the right-wing as Donald Trump gives permission to torment and commit violent and other  harmful acts against "liberals", "progressives", "minorities", "immigrants", "Muslims", "the news media" and any other group which he as the leader and they as the followers deem to be "unAmerican" and not sufficiently "loyal" to the "cause" and "the movement".

CNN reported on Wednesday how:

The Florida man who pleaded guilty to mailing explosive devices said in a letter to a federal judge that attending a rally for President Donald Trump "became like a new found drug."

Cesar Sayoc has admitted to sending pipe bombs to CNN, and various Democratic officials and donors. He pleaded guilty last month to 65 felony counts, including using weapons of mass destruction in an attempted domestic terrorist attack.

In the handwritten letter filed Tuesday in the US District Court for the Southern District of New York, he told a judge that "the first thing you here (sic) entering Trump rally is we are not going to take it anymore, the forgotten ones, etc."

At those events, he said, he came into contact with all kinds of people. "You met people from all walks life ... color etc," he wrote. "It was fun, it became like a new found drug."

He also wrote that Trump's self-help CDs reprogrammed his mind, and detailed the negative reaction he got for the Trump stickers on his car, including having his tires slashed and windows broken.

"I laughed at first. It was ridiculous how people were reacting and violence on both sides," he wrote.

Donald Trump is a "new found drug". These are the words of a political cult member. Unfortunately Cesar Syok is not alone in his sentiments. Many millions of Trump's supporters share such thoughts and feelings.

Steven Hassan, who is one of the world's leading experts on cults explained to me in a conversation here at Salon in March of 2018 how, "Donald Trump fits the stereotypical profile of a cult leader. His followers fit the model as well. Many of them, especially the ones that say, “He could do anything and we would still believe him, we would still follow him,” sound like people who have been indoctrinated into a totalistic mindset.Trump's strategies of fear programming, redefining reality and defining independent journalism as "fake news" mirrors a country on the verge of a totalitarian takeover."

Hassan offered these additional details about Donald Trump the political cult leader which resonate even more given the information revealed in the Mueller report and Trump's behavior now three years into his presidency:

There are other aspects such as narcissism, where people are not operating out of real relationships, but more in a compensatory relationship of wanting to look good in their own mind. Thus, when they’re accused of being abusive to women they make claims such as, “Nobody respects women more than me,” or “I never said that I was grabbing a woman’s genitals,” even though he was recorded and the person that recorded him was there.

Sayoc is not alone in citing Donald Trump as an explanation for political violence. There have been other court cases where alleged right-wing terrorists and others who have engaged in political violence in Trump's name have directly mentioned the president as either an excuse for their crimes or as an inspiration for them.

Political scientists have shown that there was an at least 200 percent increase in hate crimes and other violence in those counties which hosted Donald Trump campaign rallies in 2016. During his 2016 presidential campaign and through to the present, other research shows that there has been a large increase in the growth of hate groups, hate crimes, and other right-wing political violence (some of which was lethal) in the United States.

There is much evidence of the great and dangerous power that Donald Trump holds over his public.

Public opinion and other research shows that Trump's followers only trust him to tell them the truth — even though it has been shown that he has publicly lied almost 10,000 times since becoming president.

Trump's supporters also do not care if he lies to them because their loyalty to him is unshakeable and because they believe that Trump's lies are a way of destroying "the system." Trump's supporters actually think that he is "god's vessel" and some type of divine and holy figure. Republican Fox News viewers overwhelmingly believe that Trump is "the greatest president ever".

Fox News is one of the greatest propaganda machines ever created: it controls how Trump supporters and other conservatives (mis)perceive basic facts about empirical reality.

And as Dr. Jonathan Metzl details in his new book "Dying of Whitenes", some Trump supporters are willing to die to show their support for the president and what he represents.

The MAGA bomber Cesar Sayoc has spoken a powerful — and for some — an uncomfortable truth. Donald Trump and his movement are a cult and a drug. Trump's supporters cannot be won back to normal politics and normal society until they hit rock bottom and have a moment of personal and group catharsis. It is not the job of the Democrats to help Donald Trump's supporters become healthy and well.

Instead the Democrats should focus on mobilizing its own base and winning over receptive self-identified independents as well as first time voters. The Democratic Party also needs to refine and focus its messaging and to rally behind the best candidate to avoid what President Barack Obama recently warned could be a "circular firing squad" of defeat.

Ultimately, chasing the political unicorn-leprechaun that are "Obama to Trump" voters, more generally, and "white working class" men who voted for Trump, is a waste of time and resources.