After day of chaos in Venezuela, progressives blast U.S. for backing "armed coup"

Reps. Ilhan Omar, Ro Khanna join antiwar groups in calling for U.S. to back off as Pompeo and Bolton spin 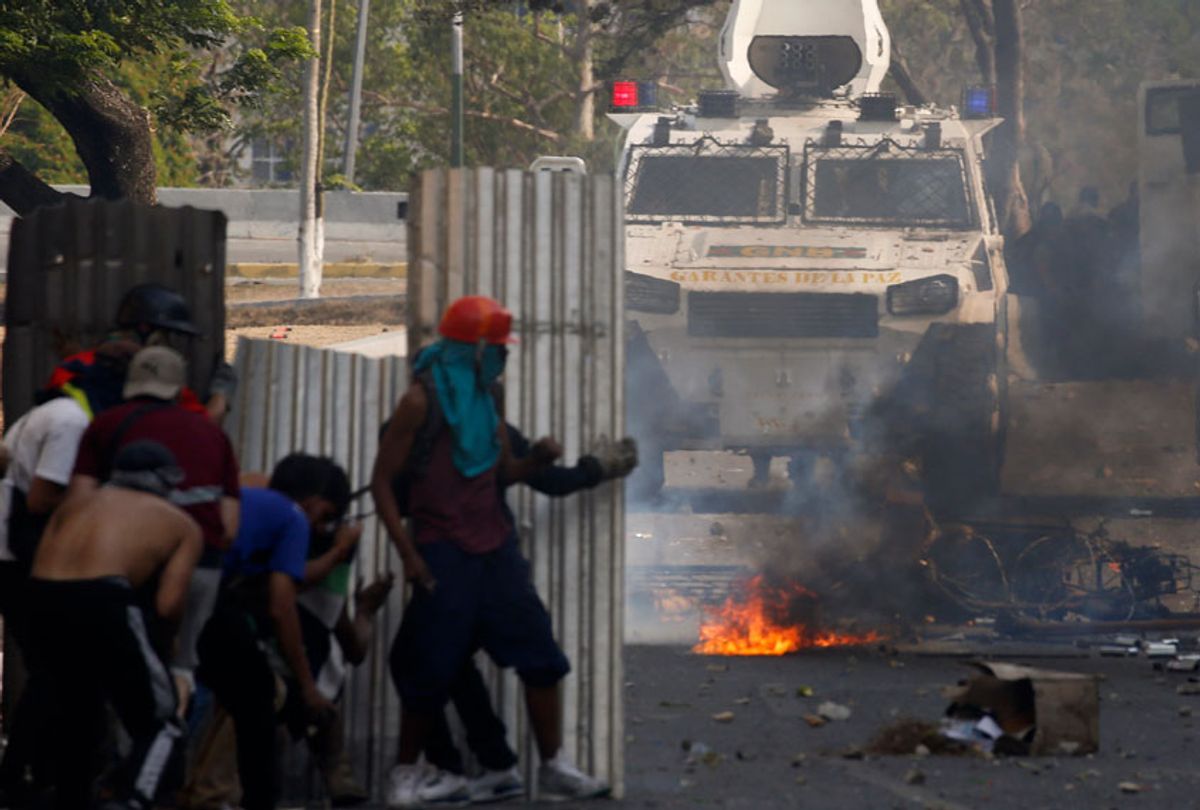 As the Trump administration enthusiastically endorsed the so-called "military uprising" led by Venezuelan opposition leader Juan Guaidó but refused to call it a coup attempt, progressive critics and antiwar voices made clear that is precisely what took place on Tuesday as violent clashes erupted throughout the Latin American nation.

"If this isn't an 'armed coup,' then what the hell is?!" the peace group CodePink asked on Twitter after Sen. Marco Rubio, R-Fla., one of the most prominent cheerleaders of Guaidó's ongoing attempt to overthrow Venezuela's elected government, denied that the opposition's efforts amounted to a coup plot.

National security adviser John Bolton echoed Rubio's insistence that Guaidó's actions — supported by a group of heavily armed soldiers — "is not a coup."

In response, Gerry Condon of Veterans for Peace wrote for Common Dreams, "And night is day."

"[Secretary of State Mike] Pompeo and Bolton blame the Cubans and the Russians for supporting the democratically-elected president of Venezuela, Nicolás Maduro," wrote Condon. "They threaten the Russians with consequences, but they save their bitterest bile for the 'Cuban thugs.' Thugs? Who are the thugs? Who are the punks? Who are the bullies?  Let me say their names again. Donald Trump. Mike Pence. John Bolton. Mike Pompeo. Elliott Abrams. Marco Rubio."

Following a day of chaos sparked by the Guaidó-led "uprising" — which resulted in dozens of injuries and at least one death — Venezuelan President Nicolás Maduro delivered a speech late Tuesday declaring victory over the "coup-mongering far right."

"I truly believe ... that the United States of America has never had a government as deranged as this one," Maduro added, dismissing Pompeo's unsubstantiated claim that the Venezuelan president "had an airplane on the tarmac" and was prepared to leave the country before "the Russians" instructed him to stay.

As Maduro said attempts to oust him have been defeated, Guaidó called for more street protests on Wednesday and vowed to "continue with more force than ever."

In a statement, the Democratic Socialists of America (DSA) joined antiwar voices in denouncing the U.S.-backed coup attempt.

As progressives denounced Guaidó's coup plot, many members of Congress remained silent or — in the case of House Speaker Nancy Pelosi — expressed support for the effort to topple Venezuela's elected government.

Rep. Ro Khanna, D-Calif., was one of the few members to speak out against the Trump administration's interference in Venezuela's internal affairs.

While condemning Maduro's government as a "failed regime," Khanna said in an interview on MSNBC that "Mike Pence shouldn't be interfering and inciting violence with Guaidó" — referring to the vice president's affirmation of support for the coup plotters Tuesday morning.

"What we should be doing is deferring to the Pope to have a negotiated settlement," Khanna concluded. "It looks like the United States is inching into yet another bloody conflict. ... The question is: Is this really the United States' role to get involved in yet another war overseas?"

"We should be encouraging dialogue and free/fair elections in Venezuela — not violence," Omar tweeted. "I believe U.S. intervention will only destabilize the region more and cause even more suffering."