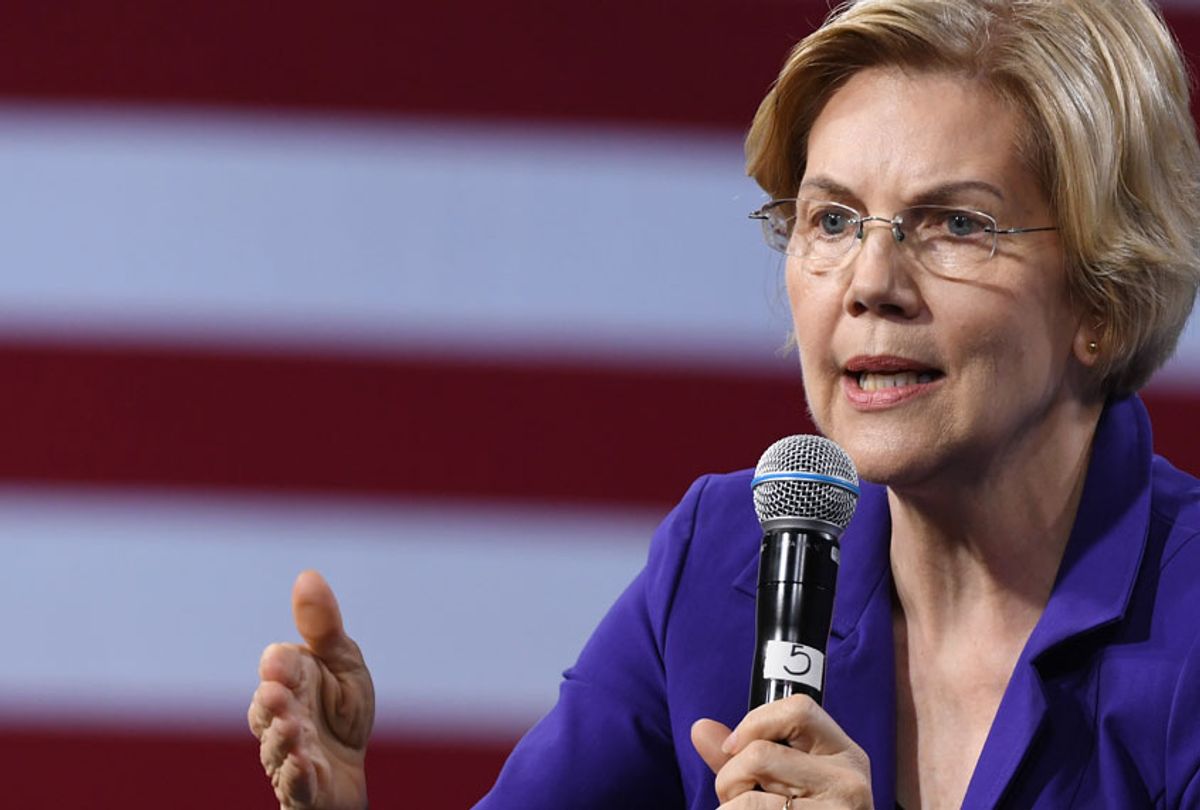 Sen. Elizabeth Warren, D-Mass., of has called on the Department of Homeland Security's Office of Inspector General to launch an investigation into the department's alleged surveillance practices. This comes in the wake of a report that claimed a private intelligence firm had provided law enforcement officials at the agency with information on hundreds of protests against President Trump's policy of separating migrant children from their parents at the U.S.-Mexico border.

"This most recent reporting raises questions about the government surveillance of Americans exercising their constitutional rights to organize peacefully and protest a cruel and unjust policy that does not make America safer or improve our immigration system and asylum process," Warren wrote in a letter Tuesday to DHS Acting Inspector General John V. Kelly.

Warren's letter came one day after The Intercept reported that LookingGlass Cyber Solutions, a private intelligence firm based in Virginia, monitored more than 600 planned protests across the country against the Trump administration's family separation policy last summer.

The administration's "zero-tolerance" policy separated scores of families in an attempt to deter migrant families from trying to enter the United States through the nation's southern border with Mexico. Under the policy, officials prosecuted nearly all adults entering the country illegally and any children accompanying them were put in federal shelters across the country — a move that sparked international outcry.

Trump ended family separations at the U.S.-Mexico border in June 2018 after it generated widespread opposition. The White House was then ordered by a federal judge to reunite the 2,700-plus children who remained in federal custody. It remains unclear how many migrant children have been separated or released to family or non-relative guardians, because of the administration's failures to track family separations.

The family separation policy prompted thousands of activists to organize and stage nationwide protests under the rallying cry, "Keep Families Together." Documents shared with The Intercept reportedly reveal that LookingGlass compiled information on hundreds of such demonstrations by tracking Facebook accounts associated with the protests. The firm then provided that data to DHS officials and state-level law enforcement agencies. DHS did not deny that the company shared information with the department, but described the data as "unsolicited."

Warren, who is running for the Democratic presidential nomination in 2020, said in her letter that she is "very concerned about the nature of this surveillance and the potentially dangerous mischaracterization of peaceful and lawful public dissent and political demonstration as a national security threat requiring government monitoring and intelligence gathering via social media."

In her letter, the senator detailed eight specific areas she wants the DHS OIG to assess, including the legal authority relied upon to use the information collected by LookingGlass and how the agency concluded that using such information was legal — if it did. Warren also urged the inspector general's office to investigate the goal and origin of the data collection.

"How was the information used by DHS or other federal or state law enforcement agencies? What other agencies received the report or data from the report?" she asked.

The Massachusetts Democrat called on the oversight office to examine whether a specific DHS official "directs or oversees LookingGlass's data collection or other actions related to monitoring of demonstrations or groups that criticize the administration's immigration policies," whether the data the company compiled was shared with the White House, and whether the firm "provided other information to DHS regarding surveillance of other immigration-related protests."

"Are there other private intelligence companies that provide similar information to DHS?" Warren asked. "If so, what is the nature of their relationship with the agency, and how is that information disseminated and used by DHS?"

Immigration attorneys representing separated families told The Intercept they were furious to learn that government resources were being used to monitor activists.

"The public rightly expressed outrage when they learned of the Trump administration's shocking policy of ripping children away from their parents," said Lee Gelernt, deputy director of the American Civil Liberties Union's Immigrants' Rights Project. "They'll again be outraged to learn that, rather than focusing resources on reuniting these families, the administration was instead spying on them for expressing themselves."