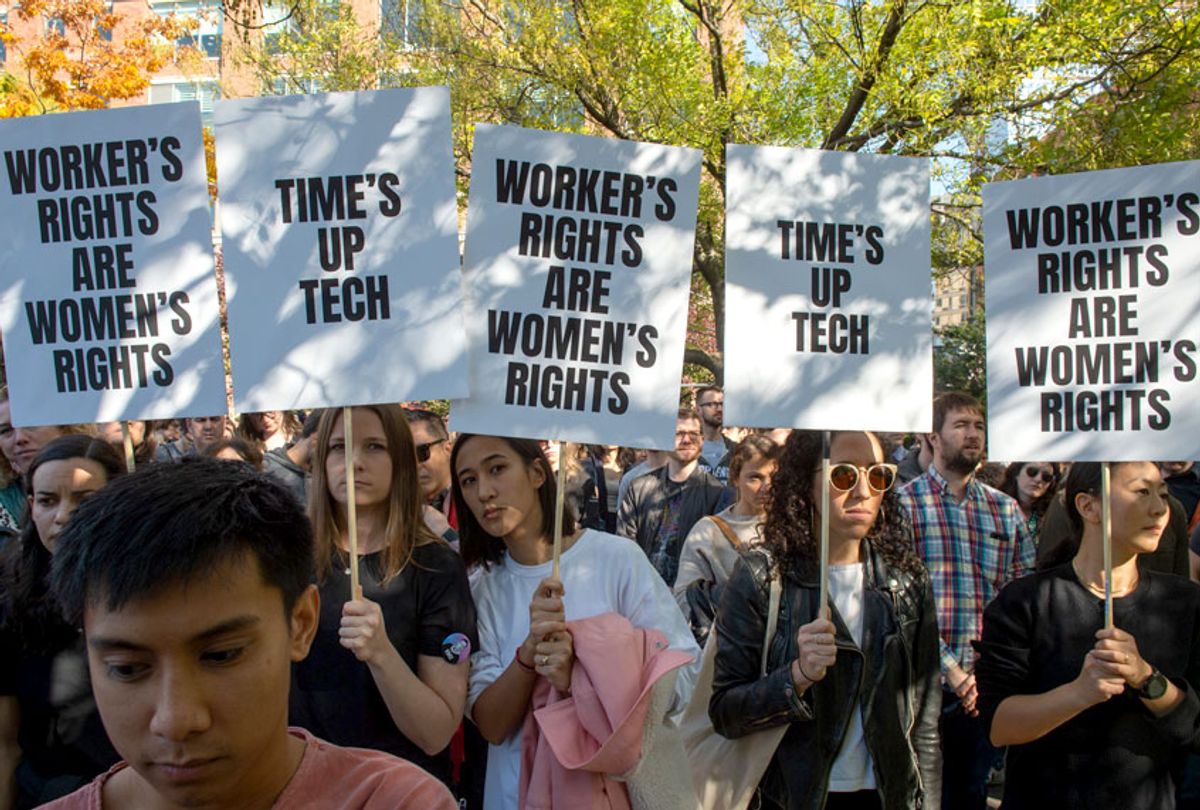 On Monday, May 6, over 150 aggrieved Riot Games employees walked out of its Los Angeles offices to protest the popular video game company’s corporate stance on forced arbitration and its sexist work culture.

The protest emerged in response to a recent controversy in which the company forced two of its current employees into private arbitration after five women filed a lawsuit. Many white-collar companies require employees to sign forced arbitration contracts as a condition of employment, meaning that employees who are victimized by a fellow worker or involved in a company dispute are legally mandated to let the company internally arbitrate such issues — and are thus disallowed from suing the company. In practice, forced arbitration policies are often used as a means of hiding sexual assault and sexual harassment cases from public scrutiny by keeping them confined to a company's internal mediation apparatus.

In August, the video game blog Kotaku published an exposé on a sexual harassment scandal at Riot Games. Last month, the company forced two plaintiffs in the sexual discrimination case that followed into arbitration instead of a full trial.

“While forced arbitration has not directly impacted me, Riot's choice to use it in the active litigation makes me feel much more unsafe here,” Jocelyn Monahan, a Social Listening Strategist at Riot Games and one of the walk out organizers, told Salon. “Victims of harassment and discrimination should have the right to choose the way they confront their abusers.”

Monahan added: “Should the situation arise, I would want the option to face them in a court of law and have the evidence against them publicly and permanently documented.”

Workers say if their demands aren’t met by May 16, further action will be taken.

It is the largest walkout of its kind in the video industry. Riot Games is the company behind “League of Legends,” a popular esports video game. In 2016, it had 100 million monthly players, and the company has 2,500 employees; its parent company is Tencent Holdings Limited, the largest video game company in the world. The worker's protest is intended to stand in solidarity with the plaintiffs in the sexual discrimination case, but to also advocate for companies to cease using forced arbitration as a tool to silence their employees.

“Forced arbitration strips rights from marginalized groups who experience harassment or discrimination in favor of more privileged groups,” Liu told Salon. “It's been a legacy clause in many company contracts, but that's not an excuse to keep it.”

In an emailed statement to Salon, Riot Games said it supported the Rioters who participated in the walk out on Monday.

“We asked all managers to make every accommodation to allow Rioters to participate during the 2–4pm window, including freeing up meeting times,” the statement said.

On May 2, Riot Games published a plan on how the company expects to resolve forced arbitration issues. In a public statement, the company said once the current litigation is over, new employees will have the choice “to opt-out of mandatory arbitration for individual sexual harassment and sexual assault claims.”

“At that time, we will also commit to have a firm answer around expanding the scope and extending this opt-out to all Rioters,” the company statement said.

The company also released a 30, 60 and 90-day plan on how it will create a harassment-free culture, which includes anti-harassment training for new hires.

Not all employees have been happy with the company’s response, however.

“The concessions they made on Thursday (opt-in clauses, for future employees only, and a commitment to commit on current employees someday in the future) were deeply unsatisfying,” Monahan said. “I want to see an end to forced arbitration, full stop, without any modifiers.”

The protest follows a trend of organizing that is unprecedented for the video game industry, but has been slowly on the rise over the last couple years. Game Workers Unite, profiled by Salon last year, is building a grassroots movement to organize the ranks of video game makers. This has been prompted by issues like “crunch” (an intense period of overworking caused by a game’s final stages of production), sexual harassment reported at other companies in the workplace, and large-scale layoffs with no severance.

In the past year, there have been rumblings within the industry that hint that unionization is on many worker's minds. At the 2019 Game Developers Conference, pro-union zines were handed out after the games workers branch of the Independent Workers Union of Great Britain was established, which was the first legal trade union for game workers in the UK.

Kevin Agwaze, an organizer and moderator for Game Workers Unite as well as the elected treasurer of that game workers branch, explained to Salon that “the industry is finally admitting that this is an environment where workers of all kinds are exploited, discriminated against, and taken advantage off, that can only be fixed by collective action and worker solidarity.”

Similarly, workers across Silicon Valley have been making steps towards unionization. In March, employees at Kickstarter, a crowdfunding platform, announced their plans to unionize. In 2018, software engineers at the startup Lanetix announced their intent to unionize — and were promptly and illegally fired by management (it is illegal to fire employees for trying to unionize).

Both this week's forced arbitration protest at Riot Games and the aforementioned previous labor actions point to the swirling discontent among video game industry workers.

"I think you are seeing this awareness growing through the industry about how arbitration is this major roadblock to any meaningful progress in terms of equity, diversity and inclusion,” Gupta told Salon. "Every company should end forcing arbitration today, no questions asked."