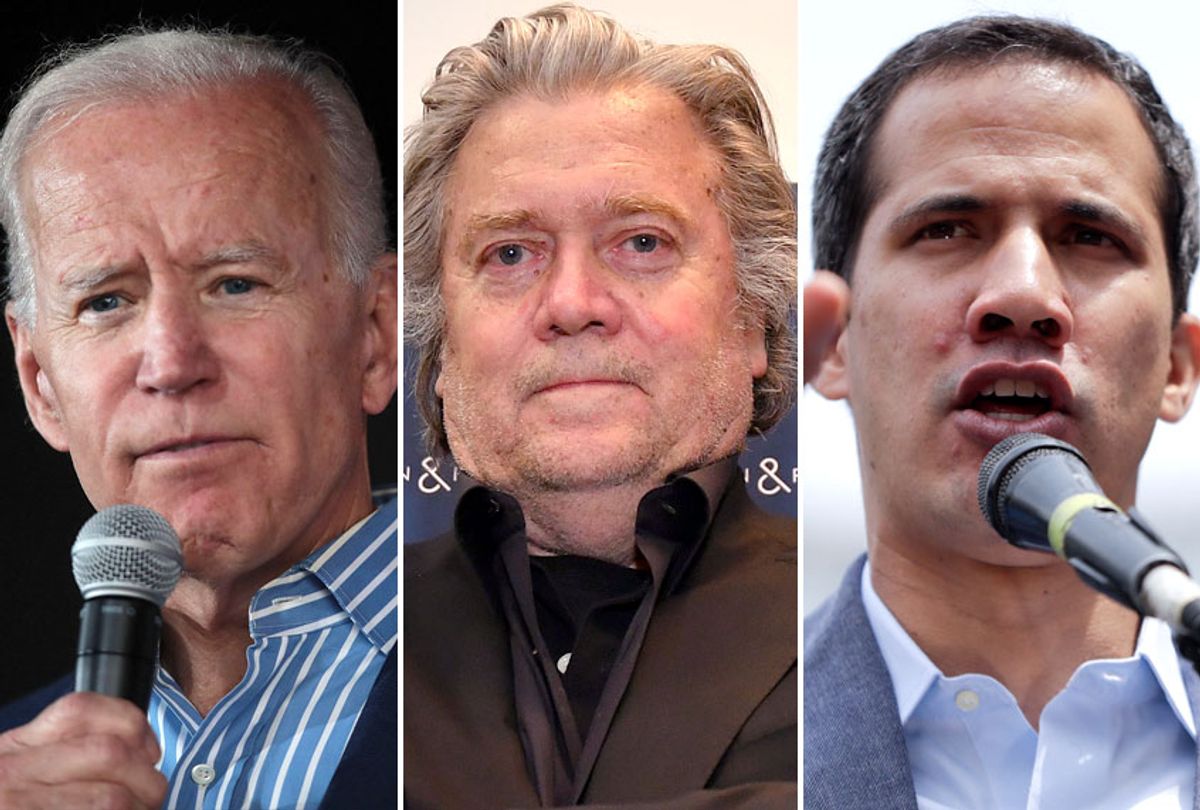 Democracy dies in darkness, or so the self-congratulatory motto atop the Washington Post’s home page tells us. But democracy can die of other things too, including laziness and ground-in conventional wisdom and a rising tide of propagandistic bullshit. This has been one of those weeks when all those impulses are on display in the mainstream media, alongside the laudable intention to let some sunlight into the dark places.

In fairness, both the Post and the New York Times — the shrunken but still formidable flagships of American journalism — have done a great deal to correct course and renew their sense of mission after their catastrophic missteps in covering the 2016 election. Both papers have reported aggressively on the rolling melodrama of Donald Trump’s presidency and its poisoned atmosphere of corruption and scandal. We will continue arguing deep into this century about the nature and meaning of the Russia scandal and the Mueller report, and about whether mainstream media got it mostly right or mostly wrong.

I think this is one of those cases where both points of view are reasonable and everyone gets to be simultaneously self-righteous and misguided, but I don’t propose to litigate that mess here and now. I think the “both/and” equation is useful to understand the media’s predicament at the moment: This was a week when the Times finally got ahold of Trump’s tax returns (yes, from several decades ago), which did not implicate him in any criminal conspiracies with Russian oligarchs but do suggest that the future president was a spectacular failure as a real estate tycoon and has never been anywhere near as wealthy as he claims.

And yet alongside that triumph of investigative reporting came clear evidence that the mainstream media remains imprisoned by exactly the kind of willful blindness and old-school establishmentarian ideology that led us to President Donald Trump in the first place. Within the space of a few days, the Post published a delusional and dangerous anti-China hate screed by Steve Bannon, Trump’s onetime Svengali; the Times and CNN published blatantly false information about the failed coup in Venezuela, plausibly dictated by John Bolton and Mike Pompeo, and in any case serving their propaganda narrative; and Times columnist Thomas M. Friedman, he of the multiple Pulitzers and all-night dinners with Crown Prince Mohammed bin Salman (pre-bone saw period), published a patronizing infomercial for Joe Biden, loaded with unproven assumptions and rooted in the blazing-hot take that the former veep is electable where other Democrats are not.

Let’s take these in reverse order. Of course it’s not surprising that Friedman, who has dedicated his career to articulating a position microscopically to the left of dead center in the American foreign policy establishment, would see Biden as the candidate most likely to provide stability and continuity after the systematic disruption of the Trump regime. What surprised me was the sterility and stupidity of the argument, which could no doubt have been made with more force and conviction by the deputy Democratic Party chair of Pick Your Heartland County.

Friedman’s long-running shtick as the responsible grownup who knows how things work and believes that American power equals greater democracy equals progress for all has been somewhat compromised, I would say, by his difficulty in getting Jamal Khashoggi’s blood off his hands.

That’s an inflammatory thing to say about a distinguished fellow journalist, so I’ll say it more clearly: Along with a bunch of other influential people, including Jared Kushner, Bob Woodward and David Ignatius of the Washington Post, Friedman was inadvertently an enabler of the Khashoggi murder. (Kushner and his father-in-law could perhaps better be described as accessories, both before and after the fact.) Those people all made clear to the Saudi royal family, Western policy elites and the entire world that Crown Prince Mohammed had enthusiastic support from the United States, across the political spectrum.

From there, the prince made the reasonable deduction, based on the entire history of U.S.-Saudi relations, that he could do as he pleased to quell domestic dissent. Friedman’s attempts, after the Khashoggi murder, to back-fill by suggesting that he didn’t quite mean all the fulsome praise he heaped on Prince Mohammed and insisting he had misgivings all along have been especially disgraceful. This is the trap of perceived authority in journalism, which is by no means unique to Friedman: He sits at the tippy-top of a largely invisible pyramid and sees no way to say directly I got played or, more correctly, I played myself.

So I don’t think Friedman is doing the Biden campaign, or the larger political discourse, any favors with his risible suggestion that defeating Trump depends on recruiting a “high-minded, patriotic” Republican to Ralph Nader-ize Trump from the right, while Democrats must of course nominate a middle-way candidate who appeals to “independents, moderate Republicans and suburban women” and will focus less on Medicare for All than on “all for one and one for all.” Hmm, what unimaginable unicorn could he have in mind? Well, he’s not endorsing anyone, Friedman flirtatiously declares, but he “appreciated how Joe Biden launched his campaign by quoting from the Declaration of Independence,” because that’s totally not a bored, box-checking citation and wasn’t focus-grouped extensively by a team of consultants or anything.

If that’s the best Biden’s team are going to get from this poisoned well, they should demand a retraction. At least Friedman did not directly participate (as far as I know) in spreading fake news about last week’s failed coup attempt in Venezuela, apparently designed to make it look as if opposition leader Juan Guaidó had attracted numerous military defectors and “liberated” a government airbase.

CNN and the Times both did that in repeated and wildly inaccurate reports, as confirmed by Michael Fox’s reporting for the Nation (followed up by Dave Lindorff of FAIR, in an article republished by Salon). Guaidó was never at the airbase, which remained in government hands throughout the coup attempt, and made his speech on a nearby highway overpass before about two dozen renegade soldiers, not the “thousands of supporters” originally claimed by CNN in an article rife with other false assertions. (On first publication, it alleged that Guaidó had won the last presidential election. He wasn't even a candidate.)

Maybe this was just negligence. These eminent news organizations both have reporters on the ground in Venezuela, but simply took the opposition at its word and never bothered to check the actual facts. Given that both U.S. political parties and the entire media establishment are openly rooting for regime change in Venezuela — with military intervention very much on the table — the airbase “liberation” might have seemed like an exciting news moment not to be burdened with pedantic concerns about accuracy.

The other, slightly darker possibility is that coup fever slid into overt propaganda, as in Tom Friedman’s bromance with Prince Mohammed: What the reporters wanted to be true was also what John Bolton and Mike Pompeo wanted to be true, which must be a rare and special feeling. And after all, Guaidó was near the airbase and had some military defectors. The opposition’s victory was surely only hours away and then it wouldn’t matter if the reporting had gotten the tiniest bit ahead of the facts.

This aligns with the Friedman problem because it makes clear that the mainstream media has lost any ability or desire to think critically about the central tenets of American foreign policy, which are that the U.S. is always and everywhere a force for moral good (except under rare and exceptional conditions) and that we play a legitimate world-cop role in seeking to overthrow hostile or undesirable governments, based on humanitarian concerns that somehow disappear when it comes to friendly but tyrannical regimes like — just to take a random example — Saudi Arabia.

Voters have lost all interest in foreign policy since the so-called end of the Iraq war — it’s murky and feels bad and involves people in strange places saying mean things about America — and Democrats almost never bring it up. As far as I know, Rep. Tulsi Gabbard is the only presidential candidate to openly oppose the regime-change policy in Venezuela, and Reps. Ilhan Omar and Ro Khanna are the only other members of Congress to follow suit. Rachel Maddow, who is well on the way to becoming the left’s version of Glenn Beck (with a better wardrobe), actually hosted a segment boosting the Bolton-Pompeo plan for Venezuela, if only as a way of sticking it to Vladimir Putin, her all-purpose supervillain.

Even by those standards, the Washington Post’s decision to publish Steve Bannon’s apocalyptic call for all-out “economic and strategic war with China” (and conceivably other kinds of war as well) represents a new achievement in both-sides-ism, or maybe just in “Heck, let’s hear the guy out.” It wasn’t enough, apparently, that Bannon brought white nationalism into the political mainstream and leveraged a con man turned game-show host into the White House. Now he gets the most prestigious venue imaginable to air his delusional fantasies of creating renewed national unity and purpose around an endless war with Eastasia.

Superficially, Bannon is just running interference for Trump’s trade negotiations, and no doubt yearns to worm his way back into his former boss’ inner circle. But anyone who has followed the twists and turns of Bannon’s career knows that he’s had a bee in his bonnet over China for many years. He was clearly responsible for Trump’s loonier pronouncements on the issue, including the infamous hypothesis that climate change was a Chinese hoax, concocted to torpedo the U.S. economy.

Of course publishing an op-ed does not imply agreement, and I don’t think the Post’s editors believe that economic competition with China amounts to “the greatest existential threat ever faced by the United States.” (Which is rich, coming from a guy who all by himself is more dangerous to the future of democracy than Xi Jinping.) I’m happy to defend Bannon’s right to publish his idiotic, autodidact theories of history — which always come off like the work of “that guy in the dorm with all the Alice Cooper records” — free of government censorship. But giving him a platform does less than nothing to restore the credibility of mainstream journalism. It only sends a message that the truth doesn’t matter, and that the so-called liberal media will surrender everything to the imaginary ideal of civil discourse, and then feel wounded when that doesn’t happen either.