"Veep" is ending, but "The Good Fight" rages on

Selina Meyers' seven-year term is concluding on a high note. Luckily Diane Lockhart has more swings in her 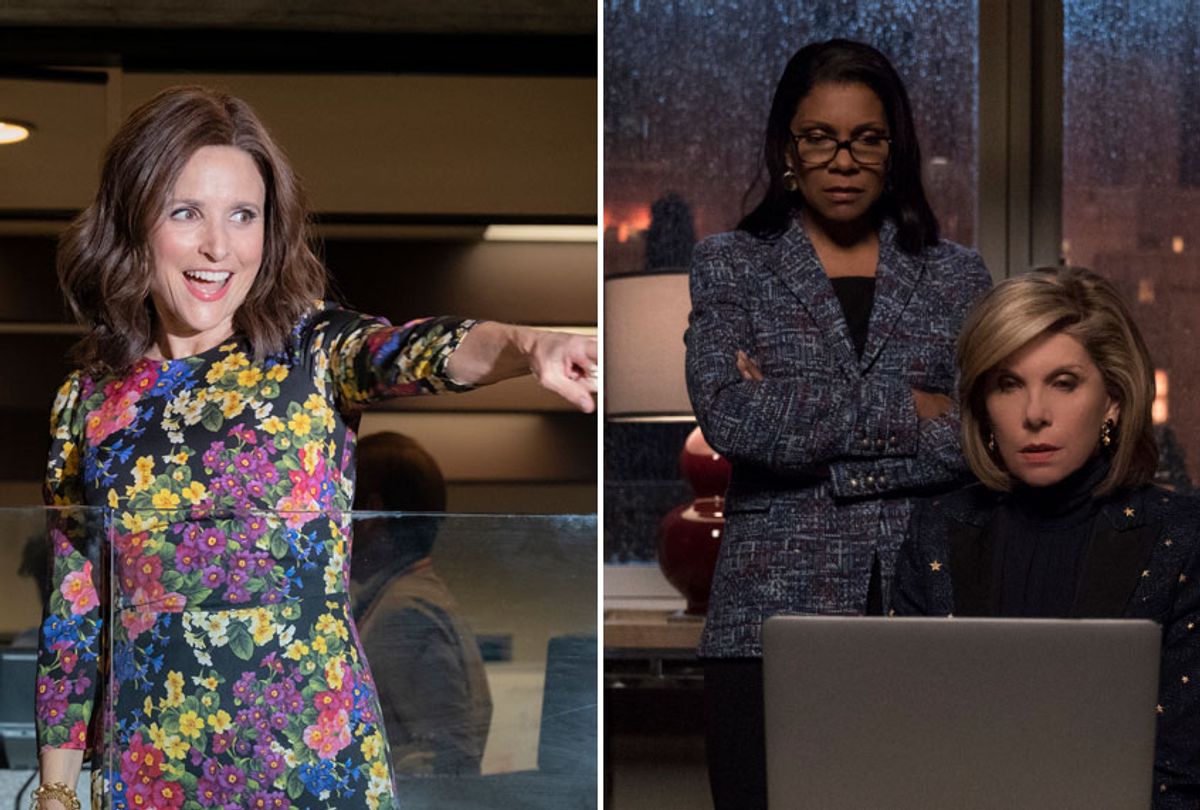 Seven seasons after its debut, “Veep” comes to an end Sunday night on HBO at 10:50 p.m. and strangely, this ending leaves me at a loss of what, exactly, to say about it that the show itself hasn’t already said to us, or that someone hasn’t said about it.

Such as, “Veep” is extraordinary work. It may very well be the most extraordinary work Julia Louis-Dreyfus contributes to television. Without question it’s the best thing she’s done so far, and in Selina Meyer she’s unleashed every dark vision and impulse of America’s political id.

Consider that in these final episodes, as Selina as somehow survived an assortment of insane debacles, she’s also managed to be accused of violating international law; flirts with accepting a payoff from an Georgian oligarch (not quite Russian, but close); and makes a spiritually corrosive handshake deal with China minutes before accepting a peace award — not the Nobel, but almost as good! — for her advocacy on freeing Tibet from Chinese control.

About the only aspect of all of this that is genuinely, bone-shakingly funny is that Selina compensates for her lack of smarts with her delightfully crass sense of humor. She doesn’t think through any of the possible consequences, and doesn’t surround herself with advisers who have the good sense or foresight — or really even care enough about anything that happens — to warn her that what she’s doing might not be wise.

“Veep” has always been oddly prophetic, a quality that explodes in this season through moments like the one listed above — and others obviously meant to take a crack at Julian Assange. When showrunner David Mandel mapped out this season there was no way of knowing that Assange would be arrested in the midst of the final season. But the world is crazy, so it's understandable why he’d take that shot.

The seventh and final season began and draws to a close on the campaign trail, the place where Selina shines brightest and Washington politics displays how evil, heartless and dumb people can be in the quest for power.

One means by which the series distinguishes itself in these final episodes is that it effectively resists the urge to make its characters get better or even to grant them a resolution one might expect or even want.

Amy (Anna Chlumsky) degenerated from pure exhaustion at being mistreated to losing her marbles enough to switch allegiance to petulantly aggressive Jonah (Timothy Simon), whose run for office has brought out the absolute worst in a character who was already awful.

Nobody could reasonably expect Gary (Tony Hale) to exist without Selina, and it’s becoming even more apparent that as much as Ben (Kevin Dunn) and Kent (Gary Cole) would like nothing more than for this crazy train to pull into the station for good, whether that exit is the White House or anonymity, they know no other life, or at least no other one that would have them.

On the other hand, as “Veep” heads into its finale, at the very least it makes political competence laughable. There was a time when this series thrived upon and reveled in its characters making decisions based in ego or out of greed or sheer ignorance. We could laugh because even when our leaders were acting in bad faith, they weren’t anywhere close to being as casually uncaring about the fates of entire nations as Selina.

But in this season, as Jonah appears at campaign rallies and whips the crowd into a frenzy over the evils of vaccinations and science, it’s only a hair away from the reasoning behind bills criminalizing abortions or requiring scientific remedy that don’t actual exist. It’s perfectly OK to laugh at Louis-Dreyfus and the rest because they once gave us comfort in an “at least it’s not that bad” kind of way.

Now that it is that terrible, one can’t help admitting that she’s probably departing us at the right time.

So what are we to do? Luckily there is comfort to be had in the CBS All Access drama “The Good Fight,” a series whose main characters Diane Lockhart (Christine Baranski) and Liz Reddick-Lawrence (Audra McDonald) dive into an underground resistance movement that asks them to do all sorts of unthinkable acts.

The fascinating part about this is that as passionate as Diane and Liz are about remaining on the right side of the law (morally speaking) series creators Michelle and Robert King often write them into situations where they’re forced to recognize that re-balancing democracy isn’t possible by following the rules. If our democracy has been hacked, what choice do we have but to build a little malware of our own?

A new player in their orbit, Roland Blum (Michael Sheen), nudges each of them toward amorality, slowly and steadily, simply by being outrageous and refusing to qualify his behavior. Sheen’s Blum is the best addition to this new season because he’s so comically evil, and because Sheen revels in the character's sordid beastliness.

But importantly, he shows everyone at Reddick, Boseman & Lockhart, a firm committed to excellence but not immune to scandal, that it’s possible and even desirable to win by using the most contemptible, corrupt means possible. Blum is a walking outrage who, despite the firm’s best efforts, will not be silenced or go away. He’s a fright, and he’s also our reality.

“The Good Fight” was the subject of a recent news story concerning CBS’ attempt to censor an animated segment that appeared on a recent episode out of the network’s concern that the content might offend the Chinese government and distributors. International distribution is a major revenue source for TV studios, and China is a huge market. This proves that even a fearless show bumps up against limits.

“Veep” might end on Sunday with Selina in the White House, where she’ll make no difference at all, or possibly make the world worse. “The Good Fight” airs its season finale on Thursday, and it is guaranteed to be with us for one more season; CBS renewed it for a fourth at the end of April. So there’s time for intelligence to prevail, and to hope that Diane, Liz and the rest to possibly make the world a better place, in some small way.